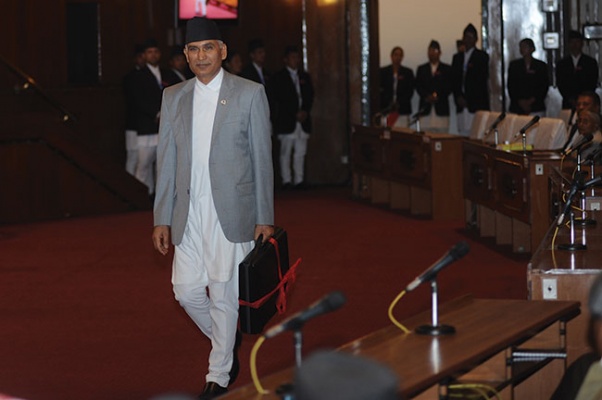 Starting in the late 1980s, Nepal embarked on the path of economic liberalization. As the government withdrew, the private sector took the lead role in the economy. But the private sector took initiatives only in low-risk and highly profitable social, financial and aviation sectors and not in the key manufacturing, agriculture and power sectors that were important for the country.

External investors still do not feel secure to invest in Nepal as they continue to be stymied by militant trade unions, instability, power shortage, weak infrastructure, strikes and red tape.

The US$ 20-billion GDP is one of the smallest in the world. Consequently, there are few opportunities for jobs in the country and millions of young people are working abroad as cheap and unskilled laborers. The balance of trade is negative. Imports are ever increasing and exports declining.

It is clear that the three important sources of economic development—hydro power, tourism and agriculture— need to be boosted for Nepal's development.

Due to our failure in hydro, Nepal is increasingly dependent on electricity from India. Therefore the government must construct medium and large power projects to meet internal demand. Ongoing hydro projects like Budhi Gandaki with the capacity of 1,200 MW and other hydro projects should be implemented on priority basis.

As far as tourism is concerned, the ill-equipped international airport of Kathmandu cannot handle the growing inflow of international tourists. But regional international airport at Nijgadh and fast track road between Kathmandu and Nijgadh has been delayed. This year, government has decided to construct these mega projects without delay in order to reinvigorate tourism. The budgets of Rs 7.22 billion for Gautam Buddha International Airport and Rs 5 billion for Pokhara International Airport signal a good start. Rs 10 billion have been set aside for the long-awaited Kathmandu-Nijagadh fast track, which is likely to contribute to economic, social and cultural transformation of Nepal.

The productivity of most of the southern plains is decreasing and agriculture sector is incapable of feeding fast-growing population. Within a decade Nepal became food importing country from food exporting country. Land productivity is declining and agriculture is becoming economically less attractive for farmers and investors. Irrigation and fertilizers availability are, meanwhile, dependent on natural rainfall and import. Establishment of medium scale fertilizer plant and fast-track in construction and completion of irrigation projects should thus also be accorded high priority.

Allocation of Rs. 5.47 billion for subsidy in chemical and organic fertilizer and improved seed and seedlings is good too. Budget provision to establish bio-pesticide industries under public-private-cooperative partnership will also help Nepali farmers. The remaining works on our major irrigation systems—Sikta, Rani JamaraKulariya, Babai, BheriBabai Diversion, Mahakali third and Bagmati Irrigation Project—are to be completed within three years. Rs. 5.35 billion has been allocated for these projects.

In manufacturing, in the name of privatization, public industries were sold without proper evaluation. This happened even though Nepali industries cannot compete with the goods produced in India and China, both of which have economies of large scale. Dumping of cheap goods from neighboring countries is killing off domestic production. Industrial base has been ruined. Industrial growth from 8.7 percent has come down to 1.8 percent in ten years. There is negligible protection for industries and great difficulty in stopping smuggling of commercial products. These are prerequisites to protect our industries.

According to the budget the government will prioritize roads and electricity transmission in areas where big industries are located. Dedicated feeder will be provided to industries for regular power supply. Supply of required electricity and fuel for industries and businesses will be ensured within two years.

In the end, the government must itself take the initiative in the implementation of mega-projects. It should then work to improve the climate for private and foreign investors in these sectors. The government's new budget has tried to follow this mantra of do-it-yourself to some extent. But we need to do a lot more on our own if there is to be meaningful development in Nepal.