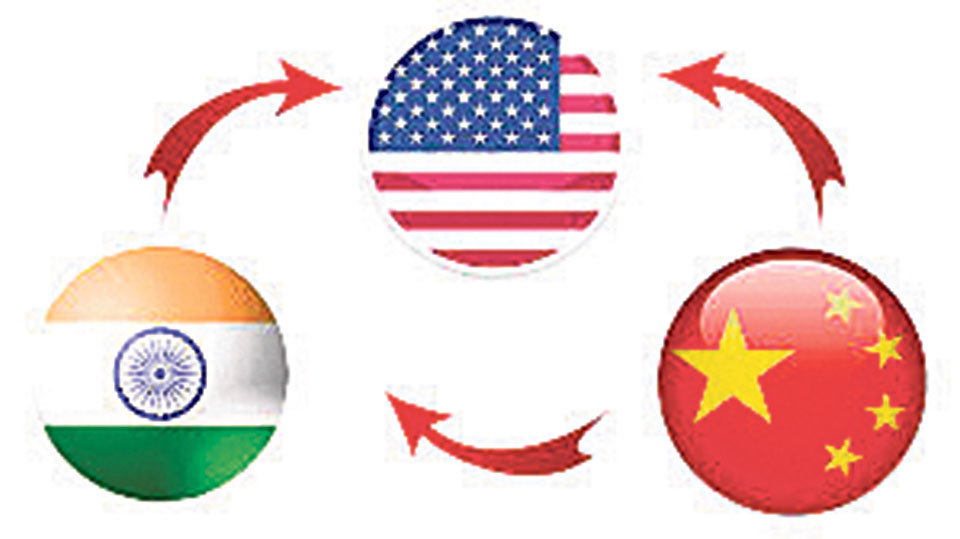 Since the time of George Bush Jr, the concept of ‘Global Policeman’ for mending international order has received more negative than positive response for its vested interest in others’ affairs. Iraq, Syria, Iran, North Korea, Yemen, Somalia, Afghanistan, Venezuela, Ukraine and Palestine are the examples.  Barak Obama’s  ‘Pivot to Asia’ has been rephrased as “Indo Pacific Strategy” (IPS), essentially to forge military  “collaboration”  through which they intend to penetrate through East Asia, South East Asia and South Asia and beyond  to contain China.

Meanwhile, President Trump’s ‘America first’ policy has annoyed more than pleased the subjects across the globe. Issues like intellectual property theft, trade war, human rights and IPS are currently discussed in regard to rising China. The US seems determined to impede Asian Dream, and more specifically China’s unstoppable growth trajectory with any tools available.

President Trump’s endorsement of Hong Kong Human Rights and Democracy Act has added to the ire in an already uncalled for US interference in Xinxiang and Tibet. Even though Beijing dropped it, the proposed extradition bill triggered perpetual protests in Hong Kong. It is insane that many Hong Kongers love the US bill, which could cost their autonomy one day. Chinese and Hong Kong governments each has claimed this as interference in their internal affairs and warned that this would lead to unspecified consequences. Trump has sarcastically hoped that “leaders and representatives of China and Hong Kong will be able to amicably settle their differences.”

IPS is aimed to counter BRI. The US emphasis on “collective solutions to shared challenges,” ruled-based development, free and open Indo Pacific, and allegations of “predatory economics”—all points to disruption.  For this purpose the US is securing partnership with countries like Nepal, Sri Lanka and Bangladesh in South Asia.

As MK Bhadra Kumar recently wrote in The Tribune “these countries  are being called upon currently to make choices vis-a-vis the Indo-Pacific strategy, but paradoxically none of them wants to get entangled in the US-China rivalry. All three regard China’s rise in favorable light and respond positively to the Belt and Road Initiative.”

In 2016, the US declared India a major defense partner (MDP) and awarded stature of closest ally and opened the door to Indian procurement of sensitive defense technologies. India wants to get into a “strongly built” quadrilateral partners in the region to compliment US interests in China’s backyard. Japan has “special strategic and global partnership” with India which is designed to dilute Chinese clout in the region.

As a regional power, India does not want its neighbors to drift away from its influence. India is anxious that it is losing its allies to China. It is worried that China is replacing India in South Asia as a dominant power. The recently published US Country Report on Terrorism projected Nepal as a hub of Indian Mujahideen and has indirectly warned of consequences if Nepal fails to control it.

But the  “strategic convergence “ and “military thought for minimizing Chinese foot print in South China Sea (SCS) will generate more provocations about the issues which China thinks are its  internal affairs. Former US Secretary of State Henry Kissinger recently warned of “a catastrophic outcome” if provocation persists and hoped that “the leaders” of China and the US “will realize the future of the world that depends on the two sides working out solutions and managing the inevitable difficulties”.

In this situation, the global stability can be secured only by maximizing US-China-India trilateral cooperation to benefit from each other and to ensure that people across the world also benefit.

KATHMANDU, Dec 23: Failing to forge consensus in the party's standing committee on whether to endorse the $500 million US... Read More...

President Donald Trump slapped tariffs on Chinese imports in 2018 in a bid to cut the U.S. trade deficit. ... Read More...