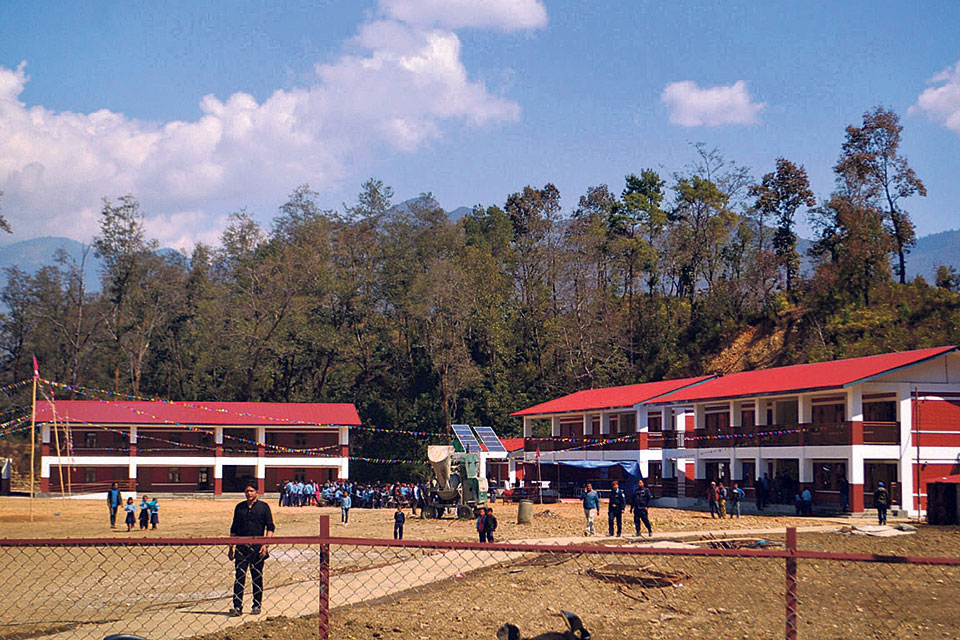 SINDHUPALCHOWK, March 8: 'It is mesmerizing'. This is what not just students, but even the principal of Selang Secondary School, Hari Prasad Poudel has to say about the school's new buildings. “We feel that we are at a big resort', Poudel notes.

While the epicenter of the earthquake was Barpak of Gorkha, Sindhupalchowk was among the 14 hardest quake-hit districts. Human causalities were massive. Many people turned homeless. “Who would care about rebuilding the school building when our survival itself was a question then? Schools got attention much, much later,” Poudel explains.

Right after the disaster, victims received assurances from many donors. They thought that life would return to normal pretty soon. “But it took months to even get a proper roof over our head. We lived in make-shift huts for a long time with no facilities,” Poudel narrated. “The issue of schools or students' education was not grabbing anyone's attention till much later.”

Selang village is considered among the remotest ones in the district. Even when victims of other areas had already received relief packages, the locals of Selang were waiting for their turn. “Due to the remoteness, volunteers and NGOs would not prefer to come this far. They would distribute relief packages in the town areas and return,” said Poudel.

Why the students and teachers of the school are now extremely excited about the new school buildings is because they had simply not thought that they would get such beautiful school buildings were coming their way. “After we lost the old school infrastructure, we thought that we would never be able to have better school buildings. But we were wronging in thinking so.”

The new school buildings worth Rs 78.3 million indeed offer all the modern facilities that a school should have. And this joint project of ADB, the Reconstruction Authority and the education unit of the District Project Implementation has quite pleased the students too.

“The classrooms are so open and comfortable. There are ceiling fans, big windows, comfortable furniture, and whiteboard. We are loving it,” said students of standard five. They added that they feel like they are studying at some modern school in a city.

The school is spread in20 ropanis of land near a forest area. It has three two-storied buildings that have spaces designed for carrying out various academic and non-academic activities.

“There are 20 rooms in total in those buildings and of them, 12 are for classrooms. Rest of them are for office, kitchen, library, computer, administration and so on,” said Poudel.

The project had kicked off two years ago. Swarna Nirman Company had received the contract. According to Mukti Sapkota of the company, design, and quality of the buildings has not been compromised. “We have given our best in constructing those buildings and as such everyone is happy,” he said.

According to the project chief Krishna Prasad Subedi, the new look of the school has elated the mood of everyone. This is a big thing for a school in a remote place. “This is now a school with all modern facilities. It is disabled-friendly, environment-friendly, and education-friendly,” he said.

There are separate washrooms for girls and boys and also for staffs, which is a rare facility in a village school. Even another remarkable thing about the school is that it provides sanitary pads to girls. If they menstruate in school, they can just go to the booth and take away the required number of pads. Power, water and solar systems are also installed in the school.

“We have a total of 240 students currently. But this is likely to grow. Since we have all the necessary physical infrastructures for a modern school, we are now going to fully concentrate on the academics and personality development of our children. Locals will definitely note this,” the principal Poudel said.

According to Arjun Thapa, Chief of the Swarna Nirman Company, 15 other quake-hit schools in the district are being built the same way.

Dhruba Dangal/RepublicaNewly constructed buildings of Selang Secondary School, in Sindhupalchowk in this photo taken on Friday.

The school is spread in20 ropanis of land near a forest area. It has three two-storied buildings that have spaces designed for carrying out various academic and non-academic activities.

SINDHUPALCHOWK, Feb 24: Police on Sunday arrested five campaigners protesting against the delay in the construction of a road section... Read More...

CHAUTARA, Oct 30: A noteworthy number of women from rural areas in Sindhupalchok are found suffering from various sorts of... Read More...

One electrocuted in Sindhupalchowk

MELAMCHI, Feb 9: A man was electrocuted in Banskharka of Sindhupalchowk district. ... Read More...