Caution: The water you drink may be unsafe 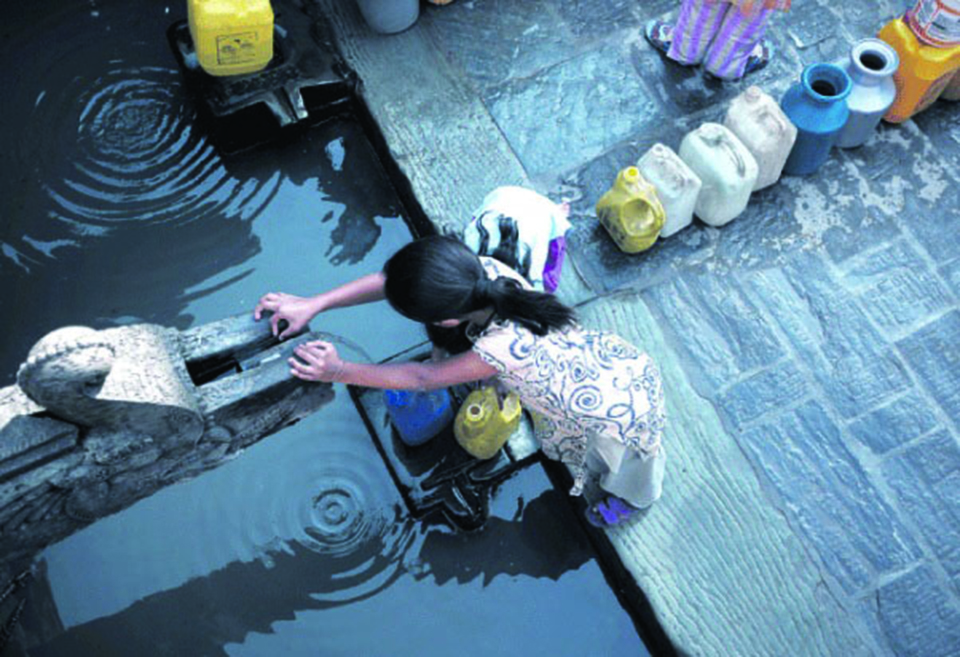 Rayamajhee is a Research Faculty at Department of Infectious Diseases and Immunology, Kathmandu Research Institute for Biological Sciences. Sigdel is Consultant-Project Officer at International Union for Conservation of Nature-Nepal
news@myrepublica.com

This summer let’s be extra cautious about the water we are drinking. Let’s take every effort to maintain proper sanitation and hygiene

Access to safe and quality drinking water is fundamental to human development and wellbeing. Availability of safe drinking water and basic sanitation are the most effective measures to prevent the spread and unusual outbreaks of different waterborne diseases. But alarmingly, drinking water sources are under increasing threat from contamination especially in resource limited countries like Nepal. This has resulted in unsafe and insufficient quantity of drinking water and inadequate sanitation. Unimproved hygiene accounts for seven percent of the global burden of disease and 19 percent of child mortality worldwide.

The United Nations has recognized access to water and sanitation as a human right because lack of potable and affordable water, sanitation and hygiene greatly impacts on health, dignity and prosperity of people and prevents them from exercising all other basic human rights. The Sustainable Development target calls for universal and equitable access to safe and affordable drinking water—the water which is free from microorganisms, chemical substances and radiological hazards.

In Nepal, a large number of people suffer from lack of access to safe and adequate drinking water. Unsafe drinking water has become a vehicle to carry different diseases, especially in monsoon season. Nearly 3.4 million people, mostly children, die annually from water-related diseases in the world. Contaminated water causes multiple diarrheal diseases, including gastroenteritis, and other serious illnesses such as typhoid, dysentery, viral hepatitis among others. Children under five are affected mostly with an estimated 45,000 children dying annually in Nepal from waterborne diseases.

One third of child-related deaths occur in Nepal due to poor sanitation and consumption of dirty water. As per the recent data of Department of Water Supply and Sewerage, facility of drinking water has reached up to 80 percent of the total population but it is not safe for drinking. Many people of remote areas still have to spend hours to fetch water from natural brooks. And in many places, they are dependent on the unprotected wells and springs. The supply of drinking water in major cities including Kathmandu is often polluted by pathogenic germs and hazardous chemical agents like arsenic. The surface and ground water of the city is getting contaminated by several contaminants including domestic wastes and unmanaged domestic sewage system, primary cause of water resource pollution.

Moreover, the water treatment facilities both in urban and remote regions are insufficient. High prevalence of water borne diseases begins with the dry season of March and lasts until summer season in September.

Unhygienic environmental situation and lack of basic sanitation have given rise to water-borne diseases each year. Due to severe shortage of drinking water supply in major cities, most people buy water from tankers from different vendors.

Every summer season, the health professionals have been warning about the outbreaks of various waterborne diseases due to contaminated water and poor sanitation. According to research by Nepal Academy of Science and Technology (NAST), most of the jar water (92 percent) sold in Kathmandu have been found contaminated with total coliforms and escherichia coli along with harmful chemical agents. This is alarming because these chemicals should be zero per 100 ml of drinking water. The study has investigated 50 water samples from different commercial companies.

As the domestic sewage system of Kathmandu city is not systematic and wastes from drainage system directly reach rivers, this can pollute natural water resources. Kathmandu depends on tube wells, stone taps and wells for drinking water, which may have been already contaminated with faecal matters.

This monsoon season, the number of typhoid and diarrhoeal patients has sharply increased in several parts of the country. Number of patients suffering from typhoid, dysentery and diarrhoea has increased in the hospitals of Kathmandu valley. Many people during monsoon season suffer from cough, common cold and viral fever as viruses multiply rapidly in humid environment. Rainy season also leads to outbreak of viral hepatitis like Hepatitis A and E which occur due to consumption of contaminated water and food. The major monsoon maladies in our surrounding are malaria, cough, common cold, viral hepatitis, viral fever, typhoid, diarrhoea, dysentery, and skin problems. According to the Department of Health Services’ Epidemiology and Disease Control Division (EDCD), awareness about basic sanitation and personal hygiene practice can save an individual from serious water borne-diseases.

EDCD recommends public to treat water with valid chemicals or boil it before consumption. Additionally, EDCD has issued warnings about maintaining basic personal hygiene and adequate sanitation during rainy season, to avoid typhoid and other water-borne diseases.

Safe drinking water, sanitation, and hygiene are three major components to keep away water borne diseases. The microbiological characteristics and the physicochemical parameters of drinking water should be monitored in regular basis by the concerned stakeholders. Additionally, water source protection strategies should be adopted in community level. Engaging the local communities to take responsibility for management of water resources may also be an appropriate strategy to improve quality of drinking water sources.

Continuous monitoring from Department of Water Supply is required to identify causes of drinking water contamination and to determine the risk of future waterborne disease outbreaks. Focus should be laid on drinking water treatment and its proper distribution. Awareness on hand washing with soap and safe disposal of faecal matters must be promoted in schools, earthquake victims’ camps, refugee camps and security shelters.

Most importantly, knowledge about the exact types of waterborne diseases and transmission pathways should be disseminated in ground level via different news portals. Whatever the source of water, water can be treated with chlorine (Piyush can be purchased from the pharmacies) or iodine. Bottled water from established brands available in sealed one-litre bottles or twenty-litre jars are also safe. However, low-priced water sold in big jars is not safe for direct consumption. Hence, it is recommended to boil drinking water before consumption regardless of its source.

While the country is striving to overcome waterborne diseases and is making effort to comply with the vision of ambitious goals like SDGs, even little efforts from a personal and community level can make a huge difference. This summer let’s be extra cautious about the water we are drinking. And let’s take every effort to maintain proper sanitation and hygiene.

Rayamajhee is a Research Faculty at Department of Infectious Diseases and Immunology,  Kathmandu Research Institute for Biological Sciences. Sigdel is Consultant-Project Officer at International Union for Conservation of Nature-Nepal

Thousands of prospective voters were systematically not allowed to vote in the elections to the House of Representatives and provincial... Read More...

According to the latest results of the November 20 elections, four of the top five parties are from the ruling... Read More...

Academic institutions' success and failure are measured on the basis of how many of their students have been getting jobs... Read More...

Rumors that Unified Socialist party is uniting with Maoist center is baseless: Dr Bhusal
31 minutes ago