There is a need for a paradigm shift in Nepal - from an anti-natalist to a pro-natalist population policy - aiding economic growth.

Many of us often miscomprehend the territorial expansion of the Kingdom of Gorkha that started in the 18th century as a political unification campaign only, while it was a complex whole of social, political, and economic pursuits. The act of agglomerating the petty principalities has been sufficiently correlated with nationalist spirit of Prithvi Narayan Shah, but the economic background to his campaigns of conquest has rarely been delved upon. In fact, there are several economic factors beyond that risky military move of the Gorkhas. First, controlling the trade routes to collect taxes from trade, second, ensuring food security by adding superior lands of Terai, and third, making the country populous enough to fight a major war with the rivals.

The ancient regime had truly acknowledged the relevance of population for achieving prosperity, unlike current loliticians, evidenced by historical textual records. In July 1800, the Kings of Kathmandu, in a mood of exasperation, wrote to one of the Ijaradar, a responsible person to collect tax from ryots, of Saptari :

‘We have granted the Ijara to you so that you may make the country populous and prosperous, collect the prescribed taxes and levies form the ryots on the basis of the lands allotted to them and not oppress them….’ (Mahesh Chandra Regmi, 1972)

During those times, the oppressive Zamindars, Ijaradars, Subedars, Jagirdars, etc. were the administrators of the King and had exploited their responsibility of tax collection. Due to this, depopulation was seen in several parts of the country and thus, revenue had shrunk. In addition to these push factors, depopulation was caused by pull factors, like permanent settlement introduced by East India Company in Bengal (including Bihar) in 1793 (Jaisi Kotha, 1942). To combat this challenge, Nepali authorities had introduced measures like tax waiver to attract settlers from India. Local administrators were encouraged to procure settlers from India and allot waste lands to them for reclamation whenever possible (Morang Revenue Regulations, 1798). Further, revenue collectors were often under obligation to settle a specified number of such immigrant families each year (Rautahat Administrative Regulations, 1806). Thus, the latter half of the 18th century marks the beginning of the pro-natalist population policy of Nepal, though an implicit one.

Further, Nepal geographically has always been a narrow corridor between two lands of giant civilizations in the north and the south, so, a sufficient population base was, and is, a sine qua non for its sovereign existence too, given the history of depopulated pseudo-sovereigns of the neighborhood. 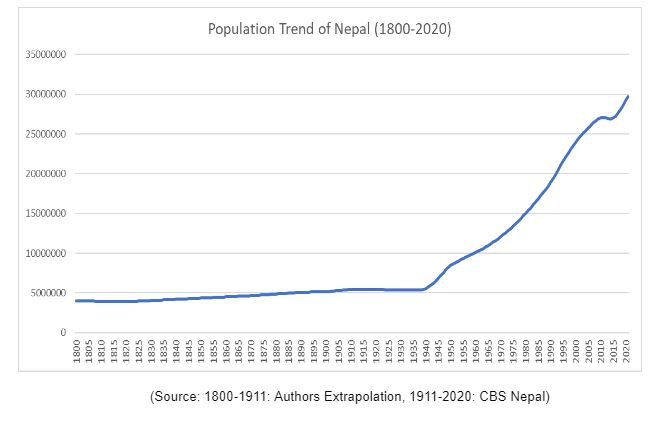 Compared to the 18th century, the fundamentals of polity and probity have changed now, but undoubtedly, abundant population has remained one of the vital prerequisites of any economy, as it ensures more hands in the production of goods and services and more revenue for the government to fund its expenses. Recent world’s emerging economic powerhouses, such as India and China, are the most populous ones in the globe and are exploiting these opportunities to pave their path to prosperity. Despite being the most populous country, China is facing a decline in population growth, and regretting the ‘One Child Policy’ undertaken from 1979 to 2016. The ones with depleting population - the countries lying on the Global North - are in more vain. In this context, it’s high time we reviewed our anti-natalist population policy.

The formal inauguration of Population policy in Nepal dates back only about half a century, through its first five-year plan. During the period of 1950-1980, fertility regulating policies were in place, being influenced by the first world population debate held in Rome (1954), the Bucharest Conference (1974), and the Mexico Conference (1984). Next, mortality regulating policy was implemented in the period 1980-2007. The Fifth Plan adopted a few quantitative techniques to reduce fertility and mortality rates. Lately, after 2007, migration regulating policy was formulated for management of internal migration and urbanization. Moreover, the prevalent Population policy (2071) has encouraged the birth of two or fewer than two children through its section 8.1.10. In effect, majority of the population policy, in the last 70 years, suggests that the nation has adopted anti-natalist policy, after the 1950s.

Given the economic ambitions of the nation and preliminary results of the population survey in 2021, the alarm has rung again. The recent trend of exodus of youths, more than 1,500 in a day, a significant proportion of which have permanently left, into foreign land has questioned the gains from the demographic dividend that we claimed for a couple of decades. The population pyramid of the country has shifted from its ‘perfect pyramid’ shape in the 2000s to ‘deforming pyramid’ in the 2022s and is expected to form a ‘perfect kite’ shape after 2050 AD (author’s calculation), which means an increasing number of aged people. The deserted rural areas of Nepal, due to urban migration, signal our depleting capacity of agricultural production. Total factor productivity of Nepal approximates 0%, as per a World Bank study period 2000 to 2014 (Swornim Wagle, 2022). And the population growth rate is expected to decline for 100 years to come, as per United Nations projections.

Assimilating all these facts and figures, it’s no brainer that our nation is rapidly turning into an aged society. So, depopulation and economic hardship is coming harshly, in the status quo.

In this scenario, there is a need for a paradigm shift, from an anti-natalist to a pro-natalist population policy, aiding economic growth. Soon after the publications of complete census reports, there is a need to immediately formulate an economic growth enhancing population policy. The previous policies were haphazardly formulated with influence from international agencies, and Pilfs (Politicians I would like to forget) vested interest, without glancing the demographic future and economic reality. The historical anecdotes vividly refer that population has close links with our development pursuits and sovereignty, as rightly showcased by Mahesh Chandra Regmi, in his magnum opus ‘A study of Nepali Economic History’. Lastly this scribe wonders if the Maharaja’s of the 17th century acknowledged the then need to hike up population for the sake of prosperity and sovereignty, what’s stopping the snollygosters of our time to be pensive over this policy?