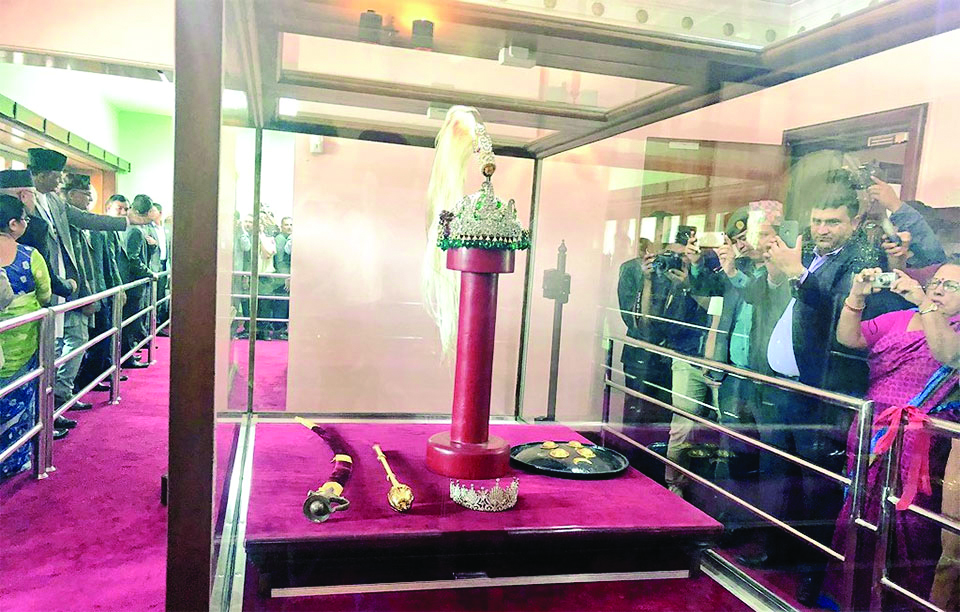 The government of Nepal has not given much priority to museum development and its protection. Existing museums in Nepal date back to the days of monarchy

Museum serves as a mirror for a country because it reflects the country’s political, economic, cultural and historical past. Museum, in a true sense, is a comprehensible book written for the posterity to see. Worldwide, people started to realize the importance of museums after the World War II when the countries broke free from colonial rule and became more aware about their cultural past. A country is a home to hundreds of languages and cultures and civilizations. This is true to Nepal where over 120 languages are spoken and over 100 ethnic communities live.  All of them are eager to learn about the origin and present status of their language and culture.  History books do not help the commoners in this. Museum does.

It is the responsibility of the state to protect language and culture of people. The need of doing this is all the more pressing in the poor and conflict-ravaged countries. This is why museums need to be set up. Museums strengthen unity, identity and national security.

Museums can act as a peace center to build peace in the conflict-ridden countries. In most international conflicts and wars, religious, cultural, historical centers and museums are targeted first.  The museums are flattened to rubbles and the antiques get plundered. Present day Iraq, Afghanistan, Syria and Libya offer glaring examples of such devastation.  The museums devastated during the World War I and II are beyond the count. And the United Nations has not been able to protect them. If the current generations cannot protect the museums, temples, churches and public places built strenuously by the past generation our art and cultural identity will surely get lost.

International Committee of Museums (ICOM) in Paris has been organizing conferences and conducting researches and case studies on museums and history. Such initiatives need to be broadened. Another equally important aspect that we cannot afford to overlook is that the poor countries with difficult geographical terrains, sparsely populated areas, tall mountains and snowcapped Himalayas, flood prone plains and inclement climatic zones have their own assets endowed by nature. Nepal is the example of this.  Founding museums in those places to represent and conserve their languages, cultures, costumes and practices would be a worthwhile initiative.

The communities there would surely join hands to found such museums. The museums in those places would certainly contribute to enhance local economy and pacify the flaring fire of identity conflict. During the decade-long conflict, Nepal witnessed over 17,000 deaths and destruction of several infrastructures.  Many people in the rebellion were demanding racial and religious identity. Twelve years after the end of conflict and Maoists coming to the mainstream politics, many ethnic communities are still raising identity issues. If we could build museums that reflect their culture and identity, they would feel recognized.

Museums are the entities of pride and glory of any country. Advanced countries have founded museums to represent their progress and achievement. But poor countries, where food, shelter and clothing are the immediate needs, cannot found big museums and if they do, they are concentrated in city areas, where people from far-flung villages cannot come to visit. Thus small museums should be established in their respective areas. The communities will take care of these museums themselves.

Why cannot developed countries lend assistance for this purpose? Why cannot we start the “Museum for Museum” campaign? International museums can expand their branches in developing countries too. But for this to happen, rich countries should be guided by idea of benevolence.

It must be said that the government of Nepal has not given much priority to museum development and its protection. Maoist conflict changed Nepal’s political paradigm but it also ruined our culture, heritage and history. Whatever museums remain in Nepal, date back to the days of monarchy.

The government should direct the local governments to establish one museum each in their respective communities. Department of Archeology is the supreme authority to manage museums in Nepal. It does not have to be. Archeology and museum are two different things. Nepal needs to set up a separate Museum Directorate under Ministry of Culture, Tourism and Civil Aviation for the development of museums.

The author, Brigadier General (Retired) of Nepal Army, is the Chairman of Nepal Museum Association and Executive Member of International Council of Museums, Asia Pacific Region

We have no dearth of tragic events, but they have not yet formed the basis for famous works of art Read More...