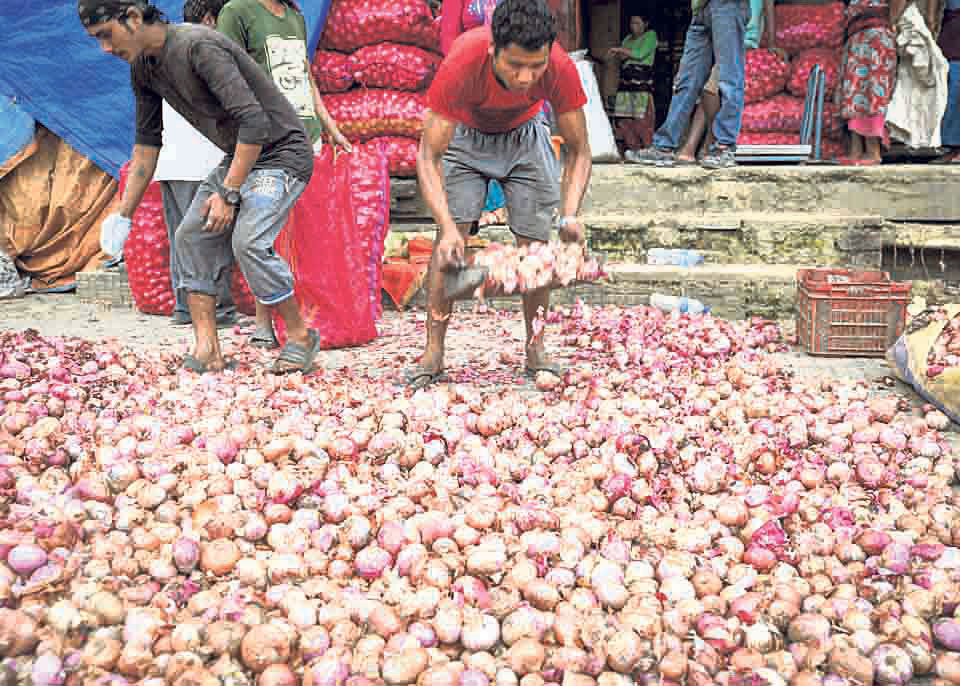 Nepal has suitable climate and other resources required to produce onion. Nepal can even export onion. Why are we not able to do that?

Onion is an important vegetable crop in Nepal and it can be grown in all districts. Physiologically, it is a long-day plant and is normally planted in October/November and harvested in May/June. Per capita consumption of onion in Nepal is 7.7 kg, which is far below the world average of 10.8 kg. Even then the domestic production is not sufficient to meet the demand of the country resulting in unavoidable import. Nepal is importing large quantity of dry onion bulbs every year mainly from India. Billions of rupees are flowing out of the country in onion import. There is always price hike when the Indian government bans export of onions to Nepal. Nepal had faced such situations several times in the past. The problem has reappeared this year as well. The only way to address this challenge is to increase onion production. Nepal has suitable climate and other resources required to produce onion. If youth farmers are trained to use modern farm techniques to boost productivity, Nepal can even export onion. But why are we not able to do that?

Constraints and challenges
It is because there are many constraints: high cost of cultivation, labor shortage, unavailability of suitable cultivars and seed, and weak research and extension support. Similarly, the storage of onion bulbs for long duration in ordinary conditions poses a problem due to high humidity and high temperature from June to September. Large portion of bulbs are lost due to sprouting, rotting and shrinkage. Total storage losses of onion in about four months period (June to September) can be up to 45 percent without curing of bulbs and about 32 percent even after curing.

How we failed
The government had started onion mission program from the FY 2064/65 BS with a noble objective of substituting onion import through increased production. The mission targeted to cover an additional 18,000 hectares under onion cultivation with the expected production of 271,634 tons. The program was implemented in 10 districts: Siraha, Saptari, Sarlahi, Bara, Rupandehi, Dhanusha, Dang, Parsa, Banke and Bardiya. The mission period was of five years and the government spent about Rs 155 million on it.

But the project failed to meet the target. The mission was able to produce only about 22,593 tons additionally. The findings of the internal review report (2012) of Department of Agriculture pointed to 1) weak research support,  2) weak coordination among key stakeholders,  3) unavailability of desired cultivars and their seeds, 4) lack of strong commitment from the government and 5) political unrest as the reason behind failure. Thus we need to do a lot to increase onion production.

Measures to take
First, the policy makers and implementing agencies should learn lessons from the past mistakes. They need to seriously consider the recommendations of the review report of Department of Agriculture while preparing new programs.

Nepal can produce even surplus amounts of onion for export. The diverse climatic conditions found in different parts of the country provide comparative advantages for off-season onion production. Exploiting agro-climatic diversity can help a lot. For example, in high mountains, onion bulbs are produced in Bhadra (August-Sept) as a normal season crop which is off-season for mid hills and Tarai. The second option is to produce onion bulbs by planting sets during June-July. The sets are produced by sowing seeds in normal season. They are of the thumbnail size.

Thus off–season onion production technique is an effective tool to meet the demand of onion in lean season. The severe scarcity of onion bulbs in the Nepali markets is seen from August to March. Through this approach farmers will also increase their income. However, very few varieties are available for the offseason onion production in Nepal. In fact, ‘agri found dark red’ is the only variety in use so far. So research work on varietal selection for off-season production and scaling-up programs are needed.

Research needs to focus on other aspects such as crop management practices for off-season production, reducing cost of production and marketing as well as developing suitable post-harvest technologies for value addition. Assurance of quality seed and regular monitoring and evaluation of seed production program is equally important.

No agriculture program can become successful unless there is an effective mechanism to establish coordination among the government agencies in three levels. The same goes for onion production. Ministry of Agriculture and Livestock Development should consider this and take necessary actions.

Onion production, particularly off-season production, requires the services of the experts. Programs of this nature can only be effectively implemented when they are led by the relevant experts. Nepal’s onion mission failed largely due to absence of horticulturist in program implementation. This type of weakness should not be repeated while implementing similar program again.

The problems associated with onion bulb production need to be addressed by coordinated and participatory research. Seed production of suitable varieties should be started as soon as possible so that quality seeds can be made available in time. Research programs should also be focused on off-season production and development of storage facilities.

Producers should also be aware of the production planning which includes issues such as what to produce, when to produce, how much to produce and where to sell the products. Finally, each onion producer should be provided with production package including farm inputs such as improved onion seed, fertilizer and technology with full agronomic practices.

KATHMANDU, Jan 18: According to the Kalimati Fruits and Vegetable Market Development Board, the price of onion has decreased by... Read More...