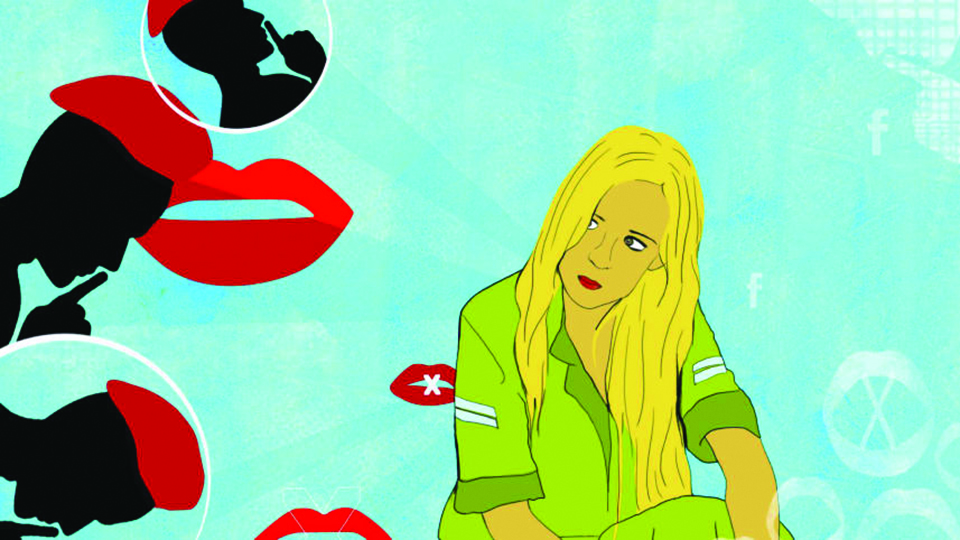 The author is a development communicator
news@myrepublica.com

There is still a silence around talking about sexual harassment including eve teasing, violation of personal space, prolonged staring among others

While #MeToo has become the most visible women’s social media movement of this century with millions of women sharing stories of sexual assault and abuse, in Nepal it seems the conversation is yet to start.

Based on Nepal Demographic and Health Survey 2016, minimum of half a million women (between the age group of 15-49) have experienced sexual violence in their lifetime. Considering women of any age (not just 15-49 year olds) can experience sexual violence and many cases go unreported, it can be assumed that the actual number is much higher.

Talking about sexual harassment is still a taboo in a patriarchal society like ours, however, it is slowly being recognised as a problem stemming from the low status and discrimination of women at all levels. Although the number of cases of rape or attempt to rape has increased over the years, there is still a silence around talking about or standing up against sexual harassment including eve teasing, violation of personal space, unwanted and prolonged staring etc.

Furthermore, legal efforts to combat violence against women are focussed on the extreme cases such as rape, while advocacy campaigns for women’s rights have concentrated on issues of gender equality, rather than on sexual harassment.

Recent studies indicate that there has been a steady growth of women’s participation in Nepal’s labour market which suggests that the problem of sexual harassment in the workplace is also increasing. However, there is limited social recognition and legal remedies for the issue. The norms, values and societal perceptions governed by patriarchy create a power imbalance between men and women and thus contribute to the low status of women and girls in our society. This unequal power relation upholds many practises which encourage women to tolerate discrimination and exploitation rather than speaking out. Commonly heard expression such ‘men will be men’ shows the acceptance of violence against women in our society.

Sexual harassment is a violation of the privacy and dignity of an individual. It causes emotional stress, humiliation, fatigue, anger, depression, anxiety, helplessness, low self esteem and physical illness. In case of workplace harassment, the victim may lose their job or miss out on employment opportunities and career advancement and it can also cause inefficiency in work performance, decreased productivity and absenteeism. All these limiting factors affect the participation of women at all levels in the workforce. But this subject is still not openly discussed in Nepal.

We recently took to the streets of Kathmandu and asked both men and women from various professional backgrounds how they ensure that they are not sexually harassed at workplaces or on their way to and from workplaces. We wanted to see if there exists a difference in perception, attitudes and experiences of men and women when it comes to sexual harassment. Around 30 people took part in the short interview which consisted of only one question: “What do you do to make sure you are not sexually harassed at work or on your way to and from work?”

The men said that they do not take any measures, it was not something they had thought about and some of them even seemed confused as to why they were being asked such question. Women on the other hand, spoke of many different approaches they took including being careful about what they wear, not travelling late at night or early morning, not being alone in a room with a man and marking out personal space, which they hoped would lower risk of harassment.

The responses received from this quick survey indicated that women and girls took it upon themselves to be responsible to prevent harassment, while men rarely thought about it. There weren’t any voices supporting the fact that it is the duty of men to not harass women and the expectation of most women was that they would be harassed in some way at some point during their day and this was something that they thought about and modified their behaviour daily to try and avoid. These results make us question what kind of society we live in if women expect to be harassed and men not harassing women is seen as aberration?

Let’s talk about it

We need more research and debate to truly understand impacts of sexual harassment on women. According to the National Demographic and Health Survey 2016, the proportion of women who were employed decreased from 83 percent in 2006 to 77 percent in 2011 and again to 68 percent in 2016. Women see the risks and restrictions of working on a daily basis, and this limits their mobility and restricts them from participating fully in the labor market. Those women who work face harassment and discrimination, which further discourages them from pursuing promotion opportunities.

With women making up more than half the population of Nepal, they could be a major push factor for the country’s overall economic development. However, issues such as sexual harassment are limiting women’s ability to contribute economically. The best way to combat this issue is to prevent it from happening. We need to discuss issues relating to violence, workplace harassment in particular, openly. We need to take a strong stance against structural problems that disregard consent, objectification of women and acceptance of violence. There is also a need for greater public sanctions of the practices and social structures that perpetuate sexual harassment.

Violation of respect, dignity and personal freedom of a person by another individual, should not be tolerated or overlooked any more. It is time to break the silence and start discussion. Together lets all stand up against violence which limits women and girls from reaching their potential.