Oli must go, but what’s the alternative? 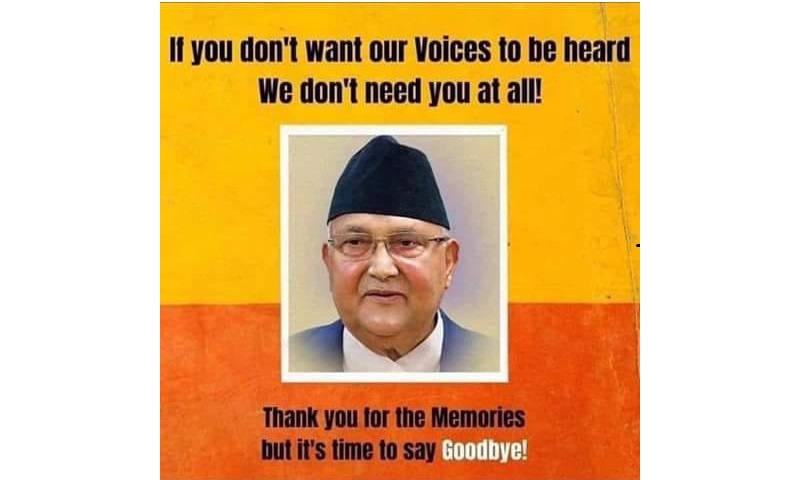 After weeks of anger and frustration, a group of young people took to the streets of Baluwatar to demand accountability from this government. The COVID-19 response from this government has been dismal: testing rates are low, RDTs reign over PCR tests, quarantines are poorly managed – hotbeds for disease-- and there seems to be no real strategy to address the impending economic fallout and the long-term management of returning migrant workers. Nepali Congress MP Gagan Thapa rightly repeated what was being said all over social media the last few weeks yesterday in parliament: Where did the 10 billion rupees spent on COVID-19 response go? Are the border quarantines fast becoming ‘concentration camps’? A series of failures have emerged as a result of what seems to be a reactive approach to governance.

Despite the lockdown, which has brought livelihoods to a grinding halt, cases are rising and the government made almost no efforts to use the time to prepare for what most people predicted as inevitable. And now Nepal finds itself in an economic crisis that was intentionally brought on to thwart a health crisis, the latter of which seems to be unfolding despite the former.  That is the trigger for the spillover on the street.

Young people feel the responsibility to be the voice for those who have none in this time of crisis: the returning migrants at the border, the people walking days on end to get home, those using carts to take their loved ones to hospitals, those committing suicide as a result of the lockdown, those being beaten up by their family members at home, new and expectant mothers deprived of basic medical care and those unable to pay rent, and of course, those contracting the virus and unable to get tested and cared for. The protest on Tuesday was a plea for the government to listen.

Going from the various posts on Facebook groups, social media and the placards I saw, the root of Tuesday’s protest seems to lie in the understanding among the urban youth that until PCR testing is ramped up and quarantines better managed, we are going to continue to face serious problems of coronavirus infection. However, it was also the understanding of the same group that the lockdown has been ‘meaningless’, that the government pressure for tax payment is unjust considering the economic situation all Nepalis have been forced into and that, all in all, the government is incompetent to deal with today’s needs.

Contrary to NCP youth and student propaganda, this was not organized by a particular political party or elite class. It was the Kathmandu-based youth, from districts across the country, backgrounds and professions, that came together to demand a more accountable government. Yes, some slogans were in English, and the protesters were seen ‘clean and civil’. But that is the new face of this country’s urban population. That is why it is tragic that some young leaders and student activists within the NCP are working hard to undermine these youth efforts on social media, as that leaves us with even less hope regarding the quality of leadership that is forthcoming within this party. Had the NC been in government, it is needless to say venomous attacks from some NC student leaders would have been no different.

The second half of Tuesday’s protest naturally became heated and the demands for the government leadership to resign surfaced. There seems to be consensus that this leadership is no good, a strain of thought that has been around for quite some time. I remember standing in front of the Rastra Bank gate in 2012 eight years ago demanding the same—the Home Minister must resign, the PM must resign. Asking the same questions: Where is the justice? Where is the accountability? Where is the money? A newer generation has emerged and is beginning to ask the same questions. A group of people are also raising their voice over the brutal killings of a youth based on caste discrimination in west-Rukum, demanding accountability and asking similar questions. These groups must be inextricably linked. However, what is potent is that no alternative seems to have gained any traction. No one seems to doubt that KP Oli must go, but what good will that do if he is to be replaced by Prachanda, Madhav Nepal or Sher Bahadur Deuba?

It will not be enough to demand resignation, an alternative clout, both within the traditional parties and outside of the parliament needs to be ready to take reigns. The values of this generation need to be reflected in politics, values driven by compassion and equality, not money and power. For one, the youngsters out there in Baluwatar today ought to encourage the participation and leadership of young parties, and challenge the older parties to make a way for the young and capable within their parties.

On the inside, so long as the younger ones in the NCP and NC themselves do not join hands with the voices of those in Baluwatar, there is little likelihood for success. The MPs and ministers seeking to take a stand, resign even if need be, not simply cry and complain over the helplessness of their situation. In particular, the young leaders within NCP and NC ought to take note: Your turn will never come unless you join hands with your compatriots on the streets and demand that your leaders step down and make a way for the new ones.

“Too many politicians and leaders but no statesman” is a statement often used by pundits to explain bad political situations.... Read More...

Nepal a step closer towards its goal, says PM Oli