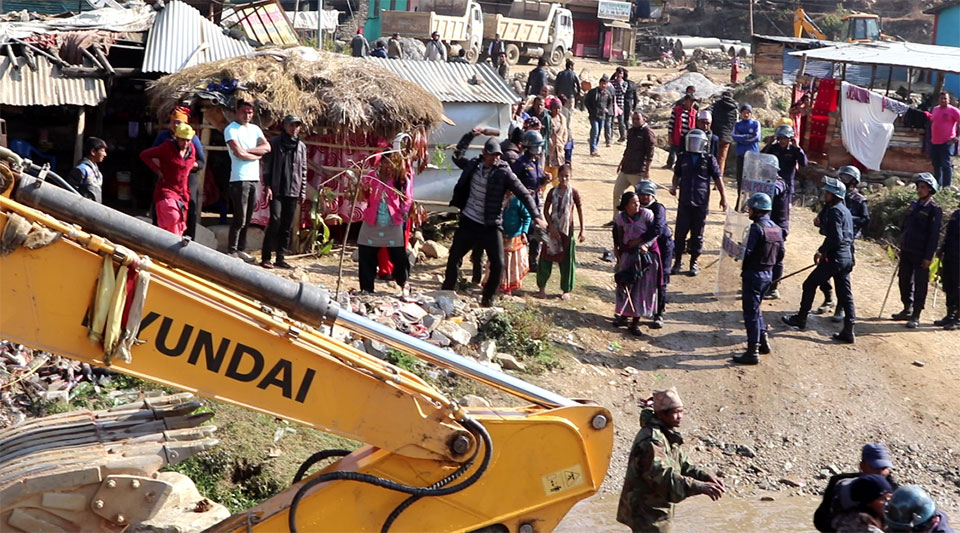 Locals clash with police after their houses were demolished in the course of road expansion in Chaurjahari of Rukum on Thursday.

RUKUM, Dec 29: Two police personnel and eight others were injured in a clash in Chaurjahari Municipality of Rukum (West) on Thursday evening.

Venting their ire against the municipality for damaging their houses and property, locals had obstructed the construction work of Melaunauli road at Chaurjahari-7. According to the locals, the construction work being carried out under the observation of the representatives of the local unit will displace them and make them homeless.

As the dispute got more serious, locals vandalized the bulldozer used for the construction work. Later, police reached there to control the locals but the situation became worse.  Locals have accused the police of unnecessarily using force and baton-charging them.

Tilak Bhandari, a local of Chaurjahari, said that the dispute arose because the road is being constructed without ensuring that it doesn’t harm the property of the people. He says the farms and fields of the locals have been encroached upon for the construction work.

Meanwhile, Nepali Congress (NC), Rukum, has accused the police of misusing power and misbehaving with the locals. “The constitution has guaranteed right to private property,” said Prem Prakash Oli, chairperson of NC’s district chapter, adding, “There is another road just 40 meters away from the area.  So, it is not right to forcefully construct the road by damaging the property of locals just to fulfill someone’s vested interests.”
Political meddling has delayed many road projects in the district.

Scores injured in clash between police and locals in Jumla

JUMLA, April 25: Score of people have been injured during a clash between the locals and the police at Bayalkatiya-9,... Read More...

KATHMANDU, Jan 20: Police on Friday fired 11 rounds of rubber bullets to take the situation under control that went... Read More...