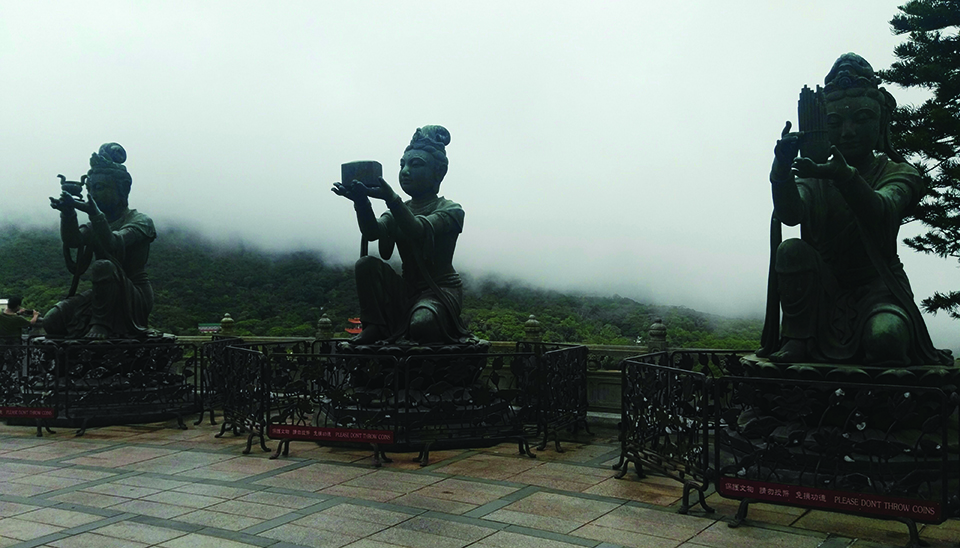 Life of Nepalis in Hong Kong revolves around work, which is unstable and unpredictable in the ‘contract culture’ of the globalizing economy

The Nepal Airlines Corporation seems to be doing brisk business on its Hong Kong sector. Its management, however, seems to be stuck in the past. The national flag carrier was conceived as a transporter of tourists to and from Nepal. That’s hardly true anymore as Nepali travelers prefer the airline for its familiarity and price despite its irregularity of schedule.

On a certain day in the second week of August, most passengers were Nepalis. However, whosoever manages the in-flight catering had forgotten that many traditional Hindus turn vegetarian in the month of Shrawan. The airline had the ready excuse that food preferences have to be mentioned at the time of booking the ticket. But try explaining that to an octogenarian flying for the first time to a foreign destination. It’s extremely unlikely that the national airline will somehow lose tones of money if it tried to be culturally sensitive and adapted its menu to suit the season. Something as simple as the provision of complementary packets of biscuit can help earn some badly needed goodwill.

Once a bridgehead of the British Empire in the South China Sea, Hong Kong was a trading as well as military post strategically located between China, Japan, Korea and Malaya. The city lost much of its mystery after suzerainty over the territory reverted back to China in 1997 and Beijing began to rule by proxy. The Chinese have so far kept their side of the bargain and allowed the commercial metropolis to maintain certain level of autonomy under ‘one country, two systems’ pledge made during handover negotiations with the British.

Limits to the freedom of Hong Kong are set by the Chinese and nobody knows when the power that be in Beijing will begin to have an itch for ‘one country, one system’ framework. Even if events unfold normally, possession of the territory will be free of ‘one country, two system’ arrangement in about three decades. Fear of 2047 when the Chinese will be free to do as they wish has begun to haunt many Hong Kongers.

Service industry is the mainstay of Hong Kong’s economy. It continues to be a transportation hub and banking is as active as it was when apparatchiks of communist countries and brasses of military ruled states in East and South East Asia found it convenient to park their ill-gotten wealth somewhere safe. Perhaps the Chinese want to maintain the reputation of the city in their own interest: It attracts capital with little or no strings attached.

Unlike Macau, another anomalous Chinese possession where the main business is pleasure, even tourism in Hong Kong is often based on business. People come to make or break a deal and then spend their evening to socialize. Having once been a British colony, the city has adopted and then adapted pub culture that fits the hot and humid climate of the place. Executives on duty spend their free time by taking the ancient tram to the Peak, ride the cable car to Big Buddha or climb the stairway to calmness with Thousand Buddha statues watching every step the seeker takes. Clear water bays and Disneyland are there to keep vacationers delighted.

The main attraction of the city, however, is the hustle and bustle of Hong Kong Central where executives in suits compete for footpath space with tourists in sneakers as billions worth of deals are sealed on daily basis in the skyscrapers of some of the most expensive pieces of real estate in the world. Slightly more otherworldly than Dubai, more homogeneous than Singapore, much cleaner than Mumbai, more organized than Bangkok and less frantic than Tokyo, Hong Kong still appears to be a quintessential Asian city. With British laws and Chinese order coexisting in harmony, residents still have faith in their government even when their hopes for its future appear to have diminished to a considerable degree.

It’s a city that over 30,000 Nepalis call their home. Some have acquired its full citizenship. Most have what they call the ‘ID’, which entitles them to reside and vote in elections. The ID holders remain Nepali citizens and carry the Nepali passport. The system of work visa for Nepalis is no longer in practice, but some economic migrants reportedly are still stuck in that category. But irrespective of their legal status, what binds most Nepalis together is their will to survive no matter what its emotional or physical costs.

Life of Nepalis in Hong Kong revolves around work, which is instable and unpredictable in the ‘contract culture’ of the globalizing economy. After they have downed some beer or something stronger, male of the species among Nepali Hong Kongers—NHKs for short—joke that 3Ws of their life are intrinsically unpredictable: Weather and Work. The third ‘W’ is then understood by everyone concerned.

Since almost all NHKs have direct or indirect Gurkha connection, most of them come from Janjati stock of hills and mountains of Nepal. Janjati, like nationality, is a political artifact and encompasses huge diversities within it. The British recruited Gurkhas mainly from highlands of Gandak and Koshi. Gurkhas from Gandak region have served the British with distinction since the formation of the Nasiri Battalion raised in 1815 by the East India Company. Those from the sources of Koshi came to the game only when the Gorkhali conquest of the eastern hills and mountains was consolidated but have served as Gurkhas equally illustriously.

Perhaps due to their closer association with the House of Gorkha, Gurungs and Magars try a little harder to conform to mainstream Gorkhali values. In comparison, Rais and Limbus have remained outsiders in the Kathmandu Court. Despite being together in security forces of Nepal, India and Britain and serving in harsh environs of Brunei, Singapore and Saudi Arabia for a long time, indigenous people of Gandak and Koshi are still differently similar. After several generations of intermingling, marital relations have begun to strengthen martial bonds. But politics of these two broad communities confounds outsiders no end.

Sharp noses of Jhapalis were first to detect the smoldering smell of resentment among Janjatis of Koshi belt. The Marxists and Leninists used Rais, Limbus, Sunuwars and other ethnicities for political purposes between 1970s and 1990s and then dumped them at the first opportunity. Maoists learnt the lesson from their predecessors and used the same trick to mobilize and then leave Magars and Tharus midstream. Exceptions apart, community leaders of Gurungs have somehow maintained their equanimity in political contestations and aligned with the winner. The strategy has served them well everywhere.

The NHKs aren’t free from political configurations back home. The Janjati solidarity brings everyone together but resentment against the ethnocentric regime in Kathmandu is stronger among indigenous people of Koshi than Gandak ones. The Clause 291 of the contested constitution, which sets the eligibility of a person for official appointments, seems to have brought the soft and hard critics of the ethnocentric regime of Singh Durbar together as it appears to be aimed expressly to disqualify NHKs and people with British identity cards that still hold a Nepali passport.

It is easy to hold a grudge against one’s own government, but expressing it in constructive ways on a foreign soil is extremely difficult. Most governments in host countries expect that ethnic minorities make attempts to integrate with the local community. Long-distance nationalism of minorities can have unpredictable consequences in international relations. The NHKs often attempt to express their irritation in relatively harmless ways.

Once again due to Gurkha antecedents, most NHKs even today are Janjatis. In jest of course, but some Janjati activists categorize themselves as Byahites, Lyayites and Bhyayites. Like Byahite progenies of the so-called ‘A-Class’ Ranas of yore that were born in formal wedlock, bona fide dependents of Gurkhas consider themselves superior. Lyayites can imply anything from formally adopted families to informally constructed consorts using legal loopholes of divorces and re-marriages. Bhyayites are those that acquire Hong Kong IDs through perfectly legal but procedurally dubious ways. Once on the treadmill of making a living, they become more or less one.

The NHKs have been demanding for decades that their government depute someone of their own in the Hong Kong Consulate. But that’s a sinecure that Khas-Arya rulers have always bestowed upon one of their own. The alienation is so extreme that the influential Janjati Mahasangh of Hong Kong has been officially boycotting their government’s consul in the city. It’s step that serves little practical purpose, but it’s enough to proclaim the insensitivity of the government towards even minor concerns of marginalized population.

Yog Prasad Upadhyay’s My Life &Time: An Autobiography came out on February 26, his 94th birthday. Upadhyay is a person... Read More...

As per the existing Narcotic Drugs (Control) Act 1976, production, sale, and consumption of marijuana is banned in Nepal. Marijuana... Read More...

The other global power shift

CAMBRIDGE – Since 2017, America’s National Security Strategy has focused on great power competition, and today much of Washington is... Read More...