Avijit Thapa is an online Correspondent at Republica Online.

Cross-Cultural Communications at the workplace

The other side of you

Life: A game of Adversities

Putting Yourself in his Shoes: AHMED DULLA!!!

It has been a while since Dulla Shoes launched its product in Nepal. From 2012 till date,  Ahmed Dulla, Founder of Dulla Shoes has been through a roller coaster ride on his maiden entrepreneurial Venture.

Ahmed Dulla was born on 26th August 1987 in Kathmandu. He takes no pride in calling himself a “Spoilt Brat” recalling his childhood. His lack of interest in education was quite prominent. Academics were a bunch of pain and sorrow. “At a point, even my family gave up on my prospects as an average student”, Dulla recalls.

His parents decided to send him to a boarding school. He got admitted in class two at a school in Kalimpong, India. He then somehow managed to usher himself to complete his secondary level education. It was no rocket science for Ahmed in taking Humanities (at the higher secondary level) as an escape-route, having calculations and theories being a pertinent issue in Science and Management Streams. Thus, Humanities was the easiest way out. He then traveled to Bangalore, India to complete his higher secondary schooling.

Dulla vividly remembers that ‘Million Dollar Question’ which changed his life- “What can Humanities students do in Life?”

Having seen his friends so visible about their careers as doctors and engineers, Dulla was conscious about time ticking away. After having asked Google that desperately submissive question, he received quite overwhelming suggestions from the search engine. A course then immediately drew his attention- Footwear Technology. The structure of the course was exactly what Dulla aspired for. 80% practical and the remaining bit were theory. He was just happy with the fact that he had found that ‘soul mate’ in a course where he didn’t have to bother reading bulky books and hectic theories.

Dulla got enrolled for a Diploma in Footwear technology at FDDI, Noida, India. The classes were scheduled from 9:00 AM to 17:00 PM.  He was surprised at how the course covered the basics of making a shoe, right from the sole to its design. This immediately helped him strike a chord with the subject. He never felt that enthusiastic before. Every day after 5 PM he would revise his daily classes and wait for the next morning.  Slowly that spoilt brat was turning out to be the exact opposite- a Patient and Enthusiast Gentleman. This interest never fell sort. Dulla was now quite clear about his Profile.

Having completed his Diploma, Ahmed wanted hands-on experience in all that he learned. He sought for an internship program in Mumbai. This tedious phase made him consider the option of running his own company back home. In 2012, with a limited budget of NPR 2, 00,000/- (A loan from his Father) he began “Dulla Shoes”. He then gradually came across a series of problems. The first being his Target Market. Dulla had apparently targeted the youth crowd, majorly students. He initiated his venture with products targeted only to the female sects of society. He perceived that the young girls were more fashionable and they would definitely comply with the product. But then came the major issue….Price…gradually Ahmed realized that the product was literally unaffordable to that target market.

He had to recheck his strategies over again. Bingo!!!! He hit the bull’s eye this time around. There was a slight shift in the target customers. Now, Mr. Dulla targeted the working class, Nepali women… doctors engineers and the corporates. It clicked. There onwards Dulla Shoes had a safe takeoff….

After making their presence in the Kathmandu market, Ahmed was swarmed by requests to start his product line for the males too… thanks to the valentine’s day and birthdays where the current customers wanted to gift a Dulla product to their loved ones( Males).

The customer is the KING (or Queen):

The Brand Dulla grew so fast in Nepal that today Ahmed has requests and orders to ship them his product to Europe, Australia, USA, and Canada. “This is all possible because I prioritize my customers first. Anything for them” he adds.”.

Dulla was sharing an incident the other week. It so happened that a pair of shoes had to be sent to the UK. The person who was supposed to be taking them had already boarded his flight. Luckily, Dulla’s other customer was an employee at the airport. So he called the latter and somehow managed to get the shoes into the flight at the death moment!!! Now that sounded like a Bollywood movie climax….but I call it the “Dulla Effect”.

This indeed has been a journey of struggle, determination and unexpected surprises. A man determined to provide a quality product in a market where customers are more focused on the price rather, Dulla stood his ground. He didn’t crumble down to the pressure of decreasing the process. And he is quite satisfied with the decisions.

Having started with products targeting the ladies only, Dulla has come through a lot of changes. Shoes for men, wallets, purses, and bags… the list is quite long. Dulla says he is always welcoming new ideas with open arms. “I have no ‘Five-Year’ plans as such,” He says. “I am taking it as it comes. Looking at the growing demand, I had to open up stores at various locations. I then went for diversifying my products. But the root is the same: Quality Leather “He states.

With quite some companies entering the footwear market in Nepal, Dulla is comfortable and has that sense of security. “It is tough as it gets going, but I have a vivid vision. I am placed at a quite comfortable position.” He smiles. Confidence says it all. This company is definitely here to stay. Dulla Shoes has definitely upgraded the ‘Quality’ sense/vision in its customers.  People complaining against prices being too hyped are now quite comfortable buying occasional and seasonal Dulla products for themselves or to gift someone. We wish him and his vision Good luck in Quali-fying the Nepalese Shoe market. 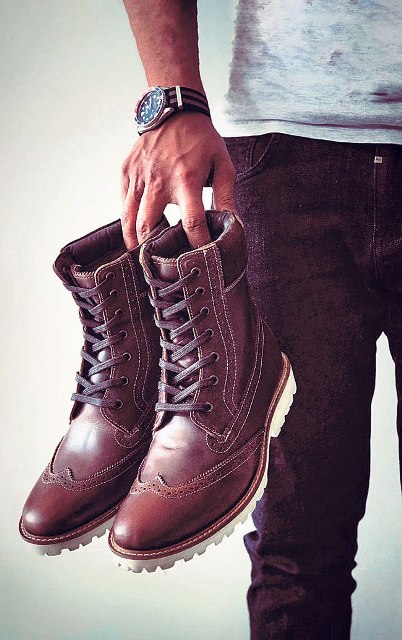