The reconstruction and preservation of Bhaktapur’s historical heritage sites is in full swing. So far, refurbishing of temples such as Siddhilakshmi, Gopinath, Harihar, Tribikram, Shanker Narayan and Kedarnath have already finished.

According to the stats provided by the Department of Archeology’s survey, the other heritage sites in the list are Khauma Prabeshdwaar, Bhimsen Mandir, Natyeshwori Mandir, Lakshminarayan Mandir, and Kwaanchhe Pati.

Mohan Singh, the head of the Bhaktapur branch, Department of Archaelogy, stated, “Other than the two heritage sites enlisted by UNESCO as World Heritage Sites, local temples have been preserved so far.  The Suryabinayak Temple is also fully reconstructed now.”

A total of 148 sites were impacted by the massive earthquake of April, 2015. Out of those, 26 were completely affected, 56 sites were partially impacted whereas the remaining 66 sites were not badly hit by the quakes.  However, four years post the earthquake only 28 site’s reconstruction has completed.

Since the refurbishment and reconstruction of the heritage sites were decided to carry out in the traditional method, it (reconstruction) faced initial delays. The shortage of construction materials and expertise only prolonged the delay further.

The archaeological department’s Bhaktapur branch has already initiated rebuilding 29 different sites in and around Bhaktapur area. “The construction of the 29 heritage sites will carry out simultaneously. We look forward to completing the reconstruction of majority of these sites by the end of this fiscal year,” the department’s officials claimed. 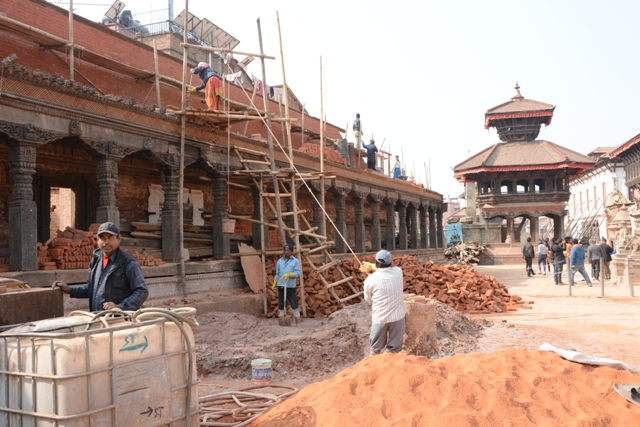