Boarding on a public bus and getting off is a–day-to-day routine for some of us. However, some of us feel troubled while commuting on a public bus. Usually, these buses are packed and you have to face difficulties while travelling, like — you can hardly breathe inside as the bus is packed, need to rush while getting in and out of the bus, getting dehydrated due to the traffic jam and being unable to buy anything, taunts from the conductors and getting a headache due to the smell of sweat.

Nevertheless, for daily bus users, even the slightest changes in the way buses run would give immense joy. And it might be hard to believe but on the route from Kamalbinayak, Bhaktapur to Bagbazar, Kathmandu, there is one such bus that has tried to make the commuters’ travel easier. Even in the absence of a conductor, this bus regulates in a smooth way. And Gagaram Khaiju is the bus driver who started his career as a bus driver in 2000. 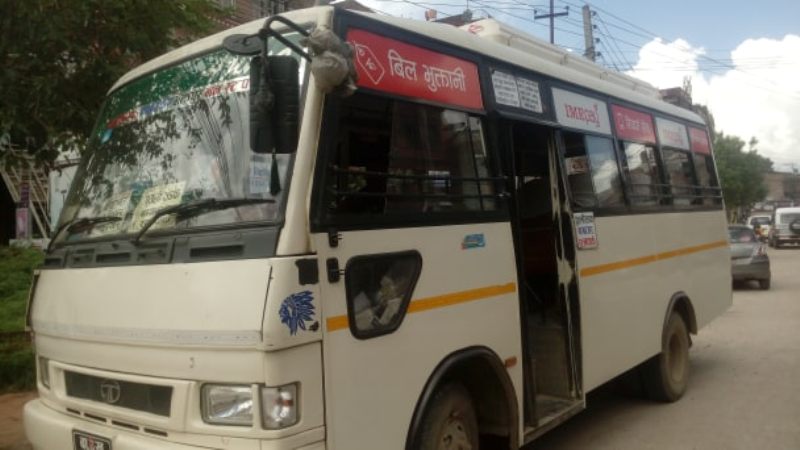 Though the bus does not belong to him, he has spent a sum of Rs 5,000 for the automatic door system and around Rs 2,000 to Rs 4,000 for other services. In the bus, you can get facilities of buying a mask in Rs 10 and instant noodles packet worth Rs 20. Then, you can get free tissue papers. And perfume, in case you are sweating and forgot your deodorant.

Meanwhile, behind the driver’s seat, there is a calendar to catch up with the dates. And the bus’s walls are covered with different pamphlets on awareness and morality. 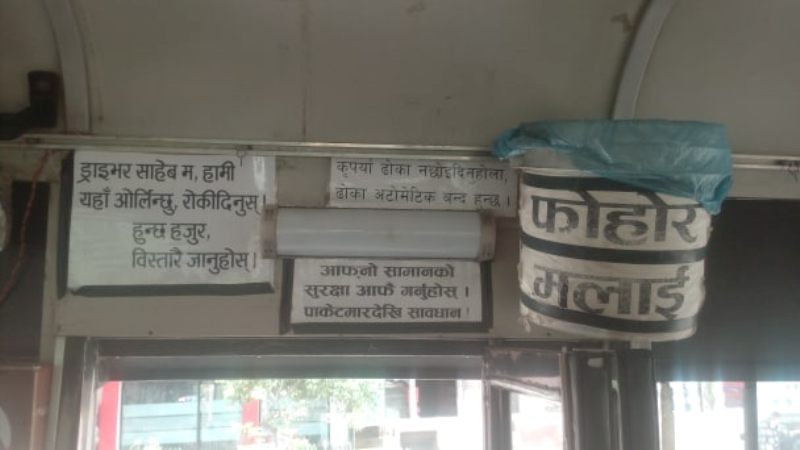 “I had a lot of trouble when I was a passenger myself. Although this bus doesn’t belong to me, I spend some money to have these facilities inside it. With these actions, I aimed to create awareness and let the government of metropolitan cities like Kathmandu and Bhaktapur, know that small changes can make things better,” expressed Khaiju who lives in ward no 2 Liwali, Bhaktapur with his family.

He added, “Despite having a family to feed and other responsibilities to look after, I feel happy that my effort has helped the public to travel with comfort.”