The ambassador who set a new norm 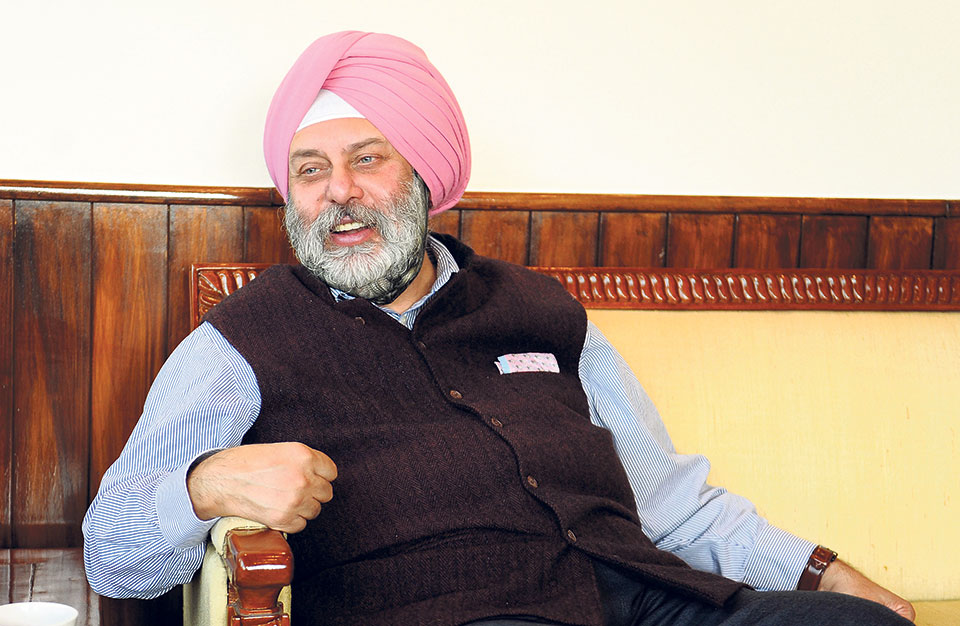 The way ambassador Puri dealt with Nepal was in sharp contrast to his predecessors who were accused of, even seen to be, trying to micro-manage affairs in Nepal

I first met Indian Ambassador to Nepal Manjeev Singh Puri, who is returing to New Delhi next week after serving his term in Nepal for around three years,  in May, 2017 in the Indian embassy.  The embassy was organizing a ‘familiarization tour to India’ and I was one among the participants.

May, 2017 was an unsettling time for Nepal. The first phase of local elections was being held on May 14 in some of the hill districts.  The second phase looked imminent but third phase was uncertain.  Madhes-based parties were threatening to boycott the polls and launch agitation for constitution amendment. While there was excitement about local polls in some parts of the country, whether the same would be the case in the rest of the country and whether Madhes-based parties would also participate in it was uncertain.

We were being served breakfast. A little while later, a tall, shining man in turban entered the hall and greeted us with smile. He asked us all to make most out of the trip and “see” India.   Some Madhesi friends were trying to raise Madhes issue. But he said time for Nepal is to focus on elections and then focus its energy on development.

Here is the Indian ambassador who thinks like me, I thought.

When I and Subhash Ghimire, editor-in-chief of this daily, met him for an interview on December 19, that impression solidified.

He was cheerful and welcoming. He was all praise for Nepal, Nepali leaders and Nepali people.   We asked him about Kalapani issue. He said it was not an intractable problem and two sides can resolve it through dialogues and mutual consultations.  We asked him about Nepal-China engagement and Nepal’s engagement with the rest of the world. He said he can comment about only India-Nepal relation and the rest of the issue is up to Nepal to decide. In his conversation with us development was the key word. He expressed the hope that Nepal will be able to achieve its aspirations of prosperity. It felt like we were talking to someone deeply concerned about Nepal’s future and development, not a diplomat from a neighboring country with which we have the relations of love and hate, friendship and worries and at times even disputes.

Standing out
Manjeev Singh Puri is different from his predecessors in some ways. When he assumed office in Kathmandu, Madhesi and Janajati parties were protesting. They had presented major realignment in federal boundaries and formation of one more province in Tarai as a precondition for participating in the elections. They were saying they would take extreme measures if elections were held without addressing their demands.

Those were the crucial times for Nepal. If the local elections could not be held, provincial and federal elections would be uncertain. If federal and provincial elections were uncertain, so would be constitution implementation process. Madhesi parties solicited his support for postponing the elections and even pressure the government of the day (led by Pushpa Kamal Dahal) to address their demands of constitution amendment. Instead, he asked them to take part in the second phase of local elections.   Madheshi leaders then softened their rhetoric.  Second phase of local polls was successfully held on June 28, paving the way for third phase in Province 2 on September 18. Then provincial and federal elections followed. Nepal’s journey to implementing the federalization process began.

Like some of his predecessors had done, he could have instigated Madhesi parties to boycott the polls. He did not. He appeared to facilitate Nepal’s election process.

It can be said that an ambassador in his/her personal capacity cannot take decisions independently. By the very nature of the job, he has to do what is suggested by the government of his country. But it could also be said that the country the ambassador represents also takes decisions based on the communication with the ambassador. Puri rightly identified that Nepal needed to complete the election process.

Only controversy that took place under his watch was in July, 2019 when the embassy sent a note verbale to the government of Nepal to lift the testing requirement after Indian trucks bringing vegetables and fruits were stuck at the border for days. From Nepal’s perspective it was a unilateral decision taken by India on the matter as sensitive as pesticide tests of vegetables, but from the Indian side, it can be said he was standing in favor of Indian business.

Save for this particular incident, his tenure was controversy-free. He did not make any comments that courted controversy. Maybe because Nepal has a stable government, maybe because India’s position on Nepal changed after 2015 but the way he dealt with Nepal affairs was in sharp contrast to his predecessors who were accused of, even seen to be, trying to micro-manage affairs in Nepal. This marks a departure from his predecessors.

Setting a new norm
Being the ambassador of India to Nepal can be both an easy and a difficult job. Indian ambassador in Nepal is regarded as a power centre—perhaps because there was a time in the 50s when Indian envoy would have an access to the cabinet meeting. There is a tendency among some parties to seek Indian mediation, or the mediation from the embassy, even in matters that are entirely internal. If the embassy intervenes, it earns a bad name. If it does not, even then it earns a bad name from some sections. Post-2015, one of the ‘grievances’ of Madhesi leaders has been that India did not help their cause. But under Puri, Indian embassy in Kathmandu carefully avoided being involved in interfering in Nepal’s internal matters. In this respect, Puri’s tenure could be an example for his successor.

Needless to say, Puri came to Kathmandu in a very critical time. The blockade of 2015 had seriously impacted Nepal-India ties. The need of the time was to repair the damage and restore the normal ties. Perhaps he could have done more than he did. We don’t know.  Kalapani border issue flared up once again (I hope he has communicated the message to the government of India and reminded how sensitive this issue is for Nepal and why India should address Nepal’s concern). Protests erupted across the country. Anti-India slogans were being chanted. Puri made no such remarks that could hurt Nepalis’ sentiment. He has been saying such issues should be resolved through bilateral negotiations, the position held by the government of Nepal and all political parties.

The wish he has expressed for Nepal is the wish that resonates with all Nepalis: “Political stability has come. Next round has got to be the economic development.” The precedent he has set for his successor is also meaningful: Do not act in a way that looks like Indian interference in Nepal’s internal affairs, maintain decorum, be friendly and humble and realize Nepal’s key concerns.

In other words, he has set a new norm for an Indian diplomat in Nepal, such a norm that deserves to be written about.

KATHMANDU, August 15: The 75th Independence Day of India was marked at the Embassy of India in Kathmandu on Sunday. Read More...

17 killed in fire at shoddy New Delhi hotel, 4 others hurt