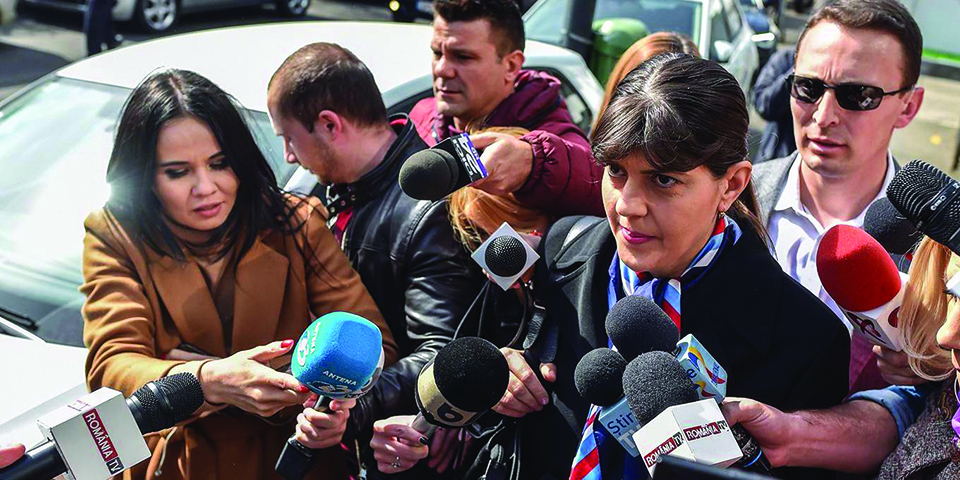 The EU was once regarded as a bastion of hope for those living under tyranny, despotism, and kleptocracy. It is time to reclaim that mantle

BRUSSELS – As the head of Romania’s National Anti-Corruption Directorate (DNA) between 2013 and 2018, Laura Codruța Kövesi presided over hundreds of high-profile convictions and became a darling of the international transparency movement. In a country struggling to build an honest justice system following its 2007 accession to the European Union, she stood out as a dogged advocate for the rule of law.

In July 2018, Kövesi was forced out of the DNA by Romania’s justice minister, Tudorel Toader, at the behest of Social Democratic Party (PSD) leader Liviu Dragnea, whom the DNA convicted in 2015 on charges of campaign fraud. She is now the European Parliament-endorsed candidate to lead the new European Public Prosecutor’s Office (EPPO), and yet Dragnea is doing everything he can to discredit her.

Though Dragnea is barred from holding office, his party leads Romania’s coalition government, and a PSD-run watchdog agency has indicted Kövesi on trumped-up corruption charges to prevent her from traveling outside Romania. Dragnea’s cronies claim that Kövesi has exceeded her authority, which is another way of saying that she has been too effective in pursuing corruption in the Romanian political class.

Kövesi’s ouster from the DNA outraged the Romanian public, and 100,000 signed a petition calling for her to be reinstated. Since her departure, the DNA appears to have ceased functioning, and Romania’s international standing has suffered for it. Despite Kövesi’s best efforts, Romania already ranked among the most corrupt EU member states in Transparency International’s 2017 Corruption Perceptions Index (after Bulgaria and Hungary). And now, the situation is worsening. Spurning warnings from the Council of Europe’s Venice Commission, more than 180 Romanian lawmakers have backed legislation that would protect politicians from corruption charges.

Romania’s future as a prosperous liberal democracy now lies with its people. One hopes that the rule of law will be reinstated, and that the country will return to the path of reform. But that can happen only if Romanian citizens support those standing against corruption and nepotism.

The response from the rest of the EU, first and foremost, should be to join the European Parliament in supporting Kövesi’s candidacy to lead the EPPO, which will be launched by the end of 2020. As matters stand, the European Council, whose revolving presidency is currently held by Romania, has backed another candidate. Beyond that, the European Commission must do more than merely criticize the PSD-led government’s backsliding on the rule of law. Real pressure must be brought to bear on the Romanian authorities.

After the European Parliament elections later this month, a new Commission will be formed under the leadership of a new president. One of its top priorities should be to develop a binding pact committing all EU member states and institutions to protect democracy, the rule of law, and fundamental rights.

As the past few years have shown, the EU needs more credible and effective instruments for scrutinizing breaches of its core values and holding violators to account. All of the main EU party groupings have already committed to pursuing a new arrangement for enforcing the principles enshrined in the bloc’s founding treaties. Following the elections, European citizens must keep the pressure on their elected representatives to ensure that they follow through.

Moreover, the European Council and Parliament should adopt legislation allowing for the suspension of EU subsidies to member-state governments that flout the bloc’s rules and standards. Governments that systematically undermine the rule of law and the free press should not be benefiting from cohesion funds that are intended for precisely the opposite purpose.

This is a critical moment for the EU. Donald Trump’s presidency in the United States, the chaos of Brexit in the United Kingdom, and the rise of populism across Western democracies have provided political cover for unscrupulous politicians to undercut the principles of liberal democracy. But the bill for the fanciful promises made by Europe’s so-called illiberal democrats is now coming due.

Liberal democrats have an opportunity to reverse the damage populists have wrought, but they must act fast and assertively. Pro-Europeans are too often pigeonholed as proponents of the status quo. This must change. With politicians who disdain democratic principles and the rights of their citizens coming under increasing scrutiny, liberal democrats must make it known that they are offering effective new instruments for ensuring accountability. The EU’s new anti-corruption czar is just such an instrument, and Kövesi seems certain to make the EPPO a vigorous and dynamic champion of justice.

The EU was once regarded as a bastion of hope for those living under tyranny, despotism, and kleptocracy. It is time to reclaim that mantle. Kövesi’s courageous and highly effective career fighting corruption in Romania has shown what one person, empowered by law, can accomplish. The EU must embrace her and everything she stands for. The fight against corruption in Romania and elsewhere is a battle for Europe’s soul.

Expansion of financial access a must for economic development in Province-1: NRB study
27 minutes ago

EU, UNFPA announce to continue their collaboration to combat GBV in Nepal as their two-year project concludes
29 minutes ago