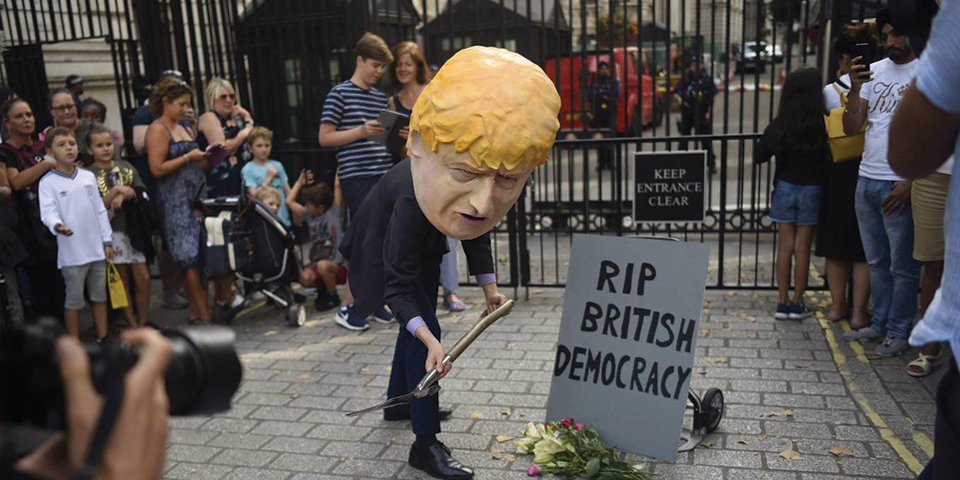 The battle for Britain’s soul has only just begun. But whether it will be fought fairly remains in doubt

BRUSSELS – The Brexit “Leave” campaign has been billed as an effort to “take back control” by restoring “sovereignty” to the United Kingdom’s Parliament. It is thus deeply ironic that one of the first moves of the Brexiteers upon coming to power has been to suspend Parliament and shut down debate over the UK’s impending withdrawal from the European Union on October 31.

Ignoring the will of Parliament, where a majority of MPs are opposed to a “no-deal” scenario, British Prime Minister Boris Johnson is now maneuvering to capture the votes of the Euroskeptic Brexit Party, so that he can deliver Brexit at all costs. To that end, he has sanctioned an all-out political war that threatens to undermine British parliamentary democracy for the long term.

Britain’s deepening political crisis is partly the result of Parliament’s failure to ratify the Brexit withdrawal agreement negotiated by Johnson’s predecessor, Theresa May, and the European Union. Britain’s lack of a codified constitution, combined with a level of political polarization now rivaling that of the United States, makes the potential outcomes of the current situation hard to foresee. Anyone who tells you how this will end is dissembling, because no one can possibly know. Britain is facing a permanent state of uncertainty, and that in itself is destabilizing for any country.

As the political fog thickens, and as the clock for negotiations ticks down, it is easy to lose sight of the endgame. Since the June 2016 Brexit referendum, under both May and Johnson, there has been a remarkable absence of serious debate in the UK about what the decision entails. The country’s leaders have shown a mystifying reluctance to grapple with the far-reaching geopolitical decisions that Brexit will require.

But make no mistake, leaving the EU will force Britain to confront far tougher decisions than anyone seems to have considered. Do the British people want to abandon European standards on food, medicine, animal welfare, and countless other regulatory issues in favor of an American regulatory model? Nobody knows, nor has there been any real debate about the costs and benefits of doing so.

US President Donald Trump has nicknamed himself “Tariff Man,” and imposed import duties on goods from US allies and adversaries alike. Are the British, who have long advocated free trade, ready to get into bed with the world’s leading protectionist? By courting Trump and pursuing a quick trade deal with the United States, Johnson’s government is simply assuming that the British people support a dramatic realignment from the EU’s regulatory sphere. Within the EU, Britain has a prominent seat at the table and a say in the rules that are made. By aligning more closely with the US, the country will be swallowing whatever Trump hands down.

Recent polling suggests that this is not what the UK public wants. When asked whom they would rather have as a close trading partner, 50 percent choose the EU, and a mere 21 percent opt for the US. Among young people, the results are even more striking, with 58 percent choosing the EU and just 14 percent preferring the US.

Trump claims to love the UK and “Britain Trump” (his ungrammatical moniker for Johnson), but that could easily change. After all, his opinion of foreign leaders and allies changes with the wind. Under a no-deal Brexit, Britain will find itself suddenly dependent on the kindness of America’s strange president, and facing existential challenges to the union of Scotland, Northern Ireland, Wales, and England.

But a no-deal scenario is not inevitable. The agreement May negotiated provides for a close future relationship between Britain and the EU. That arrangement, which Johnson himself voted for, is still awaiting ratification.

While there remains some scope for improving that deal to make it more prescriptive, the upshot is that it already offers a sound basis for concluding a close UK-EU association agreement in the future. Specifically, the withdrawal agreement provides for the creation of a joint committee comprising UK and EU representatives, which would then serve as a vehicle for future cooperation. In the maw of lies and disinformation that has defined the Brexit debate, the opportunities implied by this provision of the exit agreement have barely been discussed.

Sadly, that isn’t particularly surprising. The Brexit project has been incoherent from the start. The UK never lost “control” to begin with, and in a world dominated by the Sino-American superpower rivalry, the only way for medium-size European powers to protect their sovereignty is to form a united front. Johnson’s dishonesty about the country’s choices has been bad enough; but now he is trying to shut down democratic debate to achieve a political end. It is not too late for British politicians, even for Johnson himself, to stop playing games and actually explain the tradeoffs facing the country.

Only through honest, responsible leadership can Britain finally have a real debate about its place in the world. Whatever the outcome of the UK-EU negotiations, Brexit is just the beginning of a much longer process. The battle for Britain’s soul has only just begun. But whether it will be fought fairly remains in doubt.

Guy Verhofstadt, a former Belgian prime minister, is President of the Alliance of Liberals and
Democrats for Europe Group (ALDE) in the European Parliament
© 2019, Project Syndicate
www.project-syndicate.org