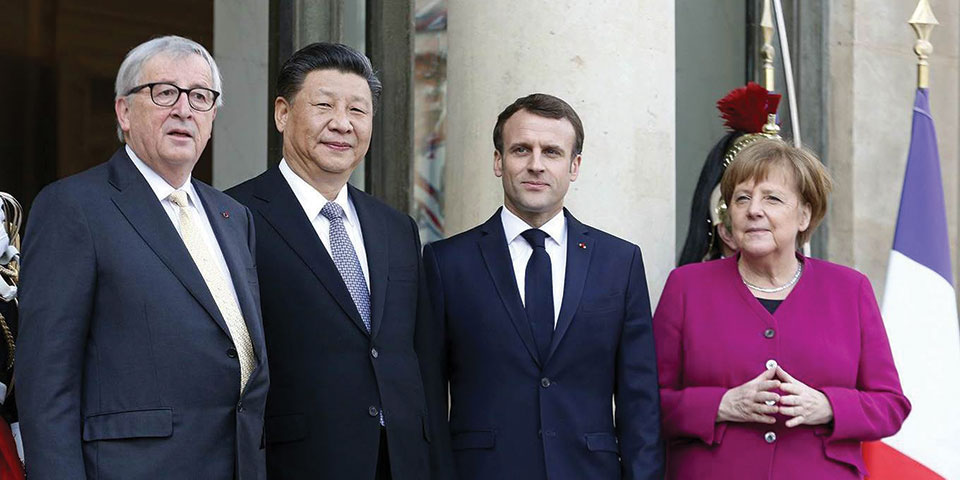 It is in Europe’s interest to strengthen the rules-based international order, not least by working with China to open up its economy

BRUSSELS – When seeking investment capital and seemingly lucrative commercial deals, EU member-state governments do not always consider shared European interests. This has especially been the case with respect to China. Yet member states that pursue a relationship with China unilaterally endanger both themselves and the rest of Europe.

True, attempts to define a common EU position toward China have so far been limited. Distracted by the endless Brexit saga and the threats posed by Big Tech, EU leaders have found scant time to discuss many other important issues. Still, in anticipation of an upcoming EU-China summit on April 9, EU leaders did explore common approaches to China at a meeting this month in Brussels, where they highlighted the risks of the Italian government’s decision to endorse Chinese President Xi Jinping’s “Belt and Road Initiative” (BRI).

That warning went unheeded. The very next day, Italy’s populist coalition government welcomed Xi in Rome and signed a Memorandum of Understanding with China, effectively breaking ranks with the rest of the EU. Sadly, Italy’s decision to participate in the BRI unilaterally will not just undermine the EU’s collective influence vis-à-vis China, but also will result in a worse deal for the Italian people.

Italy is not the first EU member state to sign on to China’s flagship infrastructure investment program; but it is the largest European economy and the first G7 country to do so. There can be little doubt that the Italian government’s move represents a coup for Xi and a setback for Europe. The BRI, after all, is not a charitable initiative developed for the betterment of humankind. It is a foreign-policy program explicitly designed to expand China’s economic and geostrategic influence globally. As the US National Security Council recently warned, the Italian government is on course to legitimize China’s “predatory approach to investment” without yielding any benefits for “the Italian people.”

The timing of Xi’s March 22-24 visit was no coincidence. Before the recent extension of the Brexit deadline, the UK was set to leave the EU on March 29. Between that and the upcoming European Parliament elections in May, the EU leadership has been fully distracted. There could be no better time for Xi to ply vulnerable European governments with promises of Chinese investment (which is to say, highly conditional lending).

Fortunately, and in stark contrast to the Italian government’s naiveté, French President Emmanuel Macron included German Chancellor Angela Merkel and EU Commission President Jean-Claude Juncker in his own meeting with Xi. Like other forward-thinking European leaders, he recognizes that in a world dominated by superpowers like China, Russia, and the United States, Europe will flourish only if its member states stand united.

Still, without a clear EU-level strategy, Europe will remain vulnerable to the global giants’ divide-and-conquer tactics, and Europeans will be deprived of a collective voice with which to defend their interests. Like Russia, which has succeeded in turning individual member states against each other with the Nord Stream 2 gas pipeline, China will engage bilaterally with as many European countries as it can. In any such negotiation, it will always have the upper hand.

One possible solution, suggested by EU Commissioner Günther Oettinger, is to give the European Commission a veto over any Chinese investments in the EU. This idea is worth exploring, because unilateral decisions by individual EU states can have far-reaching security and economic implications for the rest of Europe. Moreover, the possibility of national governments going their own way unnecessarily frustrates the EU’s own efforts to forge a closer relationship with China.

A strong EU-China relationship could have profound benefits for all involved. It is in Europe’s interest to strengthen the rules-based international order, not least by working with China to open up its economy, improve its human-rights record, and eliminate unfair trade practices. If there is one thing EU leaders can agree on, it is that cooperation with China must prevail over confrontation.

At the upcoming EU-China summit, progress toward an EU-China investment agreement by 2020 would be a positive sign. Such an accord could open up more economic sectors in China to European firms by eliminating barriers to market access and reducing discrimination against foreign direct investors. But, equally important, Europe needs a common approach to protecting its critical infrastructure, particularly when it comes to 5G hardware (of which Huawei is one of the main suppliers).

The EU has been too slow to wake up to the challenges posed by an increasingly ambitious China. But if we stick together, we can still build a Sino-European partnership that will serve all of our interests well into the future.

Guy Verhofstadt, a former Belgian prime minister, is President of the Alliance of Liberals and Democrats for Europe Group (ALDE) in the European Parliament
© 2019, Project Syndicate
www.project-syndicate.org

US Ambassador Berry returns home; Dean Thompson sworn in as new US Ambassador to Nepal
2 hours ago
Car goes missing after falling into Trishuli
7 hours ago

Body of missing Sherpa found in Manaslu
6 minutes ago