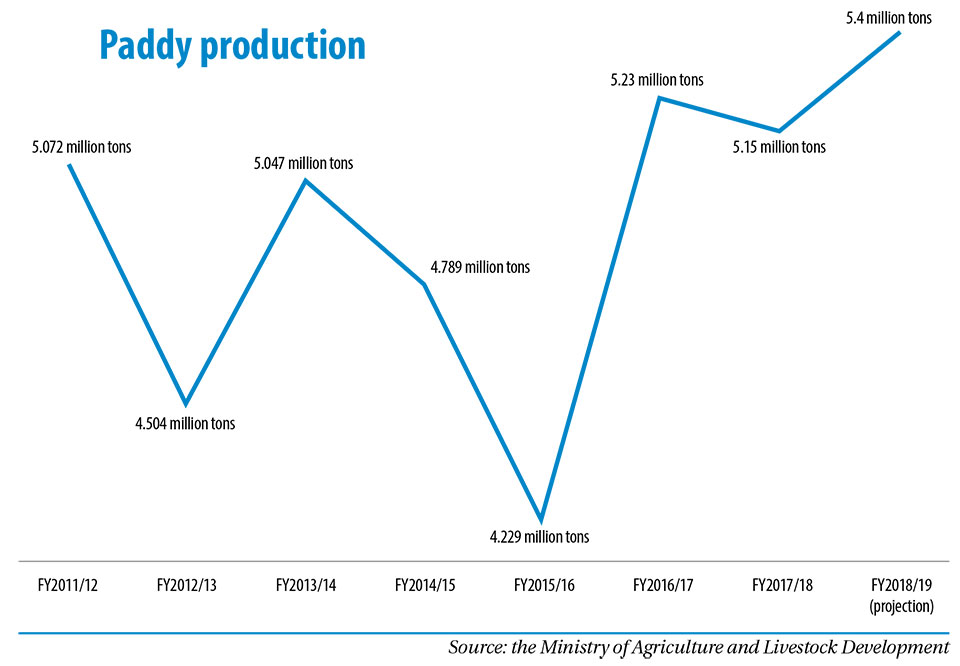 KATHMANDU, Dec 19: Paddy production is projected to grow by 4.8 percent to 5.4 million tons this year.
The Ministry of Agriculture and Livestock Development had projected paddy production to grow to this level in 2017. However, only 5.15 million tons of was produced in the year due to late monsoon and floods in Tarai districts.

Officials of the ministry are hopeful of achieving the target this year.

According to the ministry, plantation figures have remained satisfactory this year. “Paddy production is expected to increase this year on account of favorable climate, timely monsoon and availability of fertilizers and other inputs,” an official of the agriculture ministry told Republica.

Data compiled by the agriculture ministry shows that paddy plantation has been done in 1.4 million hectares of land -- 7.6 percent more than 2017. Farmers had planted paddy in 1.3 million hectares last year.

“Not only favorable climate and easy availability of fertilizers, but several projects of zone/super zone is expected to contribute to growth in paddy production this year,” said Tej Bahadur Subedi, the spokesperson for the ministry.

The ministry has said that bumper harvest is expected this year also because of Nepal-IRRI Collaborative Five-Year Work Plan (2018-2023) along with several projects aimed at increasing paddy production.

Earlier, the ministry had projected paddy production to grow to 5.5 million tons in 2018.

The ministry is hopeful that rise in paddy production will bring down the country’s rice imports this year, Subedi added.

In its work progress report of the first four months of FY2018/19, the ministry had suggested taking needful measures to control illegal trade of rice between Nepal and India. However, the ministry’s secretary has been saying that it is difficult to stop rice imports as the demand for thin and refined rice in Nepal is growing with each passing year.