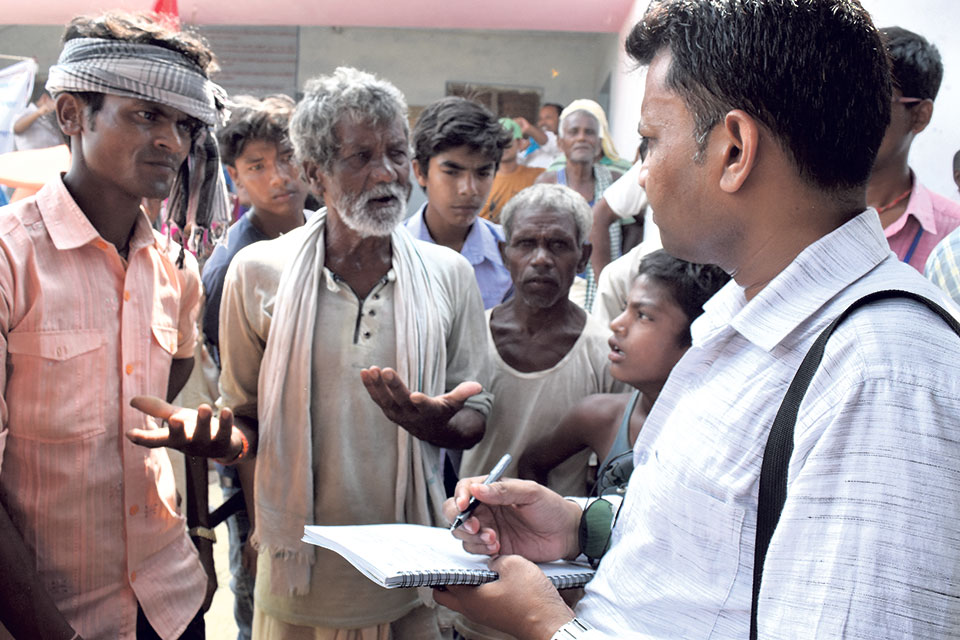 SIRAHA, June 25: As the monsoon advances, Pashupati Mukhiya recalls the heavy flooding of last year. A local of Kalyanpur-2 of west Siraha, he bitterly remembered the heavy losses he had to bear after floods in Kamala, Lohajara and Ghuri rivers inundated his village and washed away cattle, crops and destroyed properties.

“We had to spend two days in the nearby school following the inundation,” said Pashupati. “Just recalling the horror of flood makes me think of migrating elsewhere,” he added. However, he cannot afford to migrate as his daily earnings from menial labor is barely enough to provide daily bread for his family.

“We do not have the capability to purchase land in safe place. As of now, we have been living in the flood-ravaged house after minor repair.”

Another local, Murbal Mukhiya, 50, has the same plight. According to him, the settlement was safe from floods about two decades ago. “But floods and inundation have been regularly troubling us since the past few years.”

Around 200 houses were inundated in the settlement during last year's floods. Some of the victims received relief from the Red Cross Society and District Disaster Relief Committee. The victims received few kilograms of rice and some packets of salts. However, a large number of victims are still deprived from any relief.

Despite the yearly floods, authorities have not taken concrete measures to counter it. There has not been any initiative to construct embankment to prevent flooding in the settlement. Stakeholders are only concerned about distributing beaten rice in the aftermath of such big disasters.

“We have to live with the fear of floods during every monsoon. The government is not concerned about taking preventive measures. Constructing embankments and preventing Chure exploitation would help a lot,” said Rajendra Prasad Mandal, another local. “Nobody is concerned about preventing floods in this village,” he added bitterly.
Chief District Officer Rudra Prasad Pandit said the District Disaster Relief Committee is always at standby to respond to any disaster. According to him, a special task force consisting teams from various security bodies, locals and other organizations are prepared to be mobilized.

“Furthermore, we are also running awareness campaigns about flood risk and preventive measures in settlements around Kamala River,” added the CDO.

KATHMANDU, Dec 19: Paddy production is projected to grow by 4.8 percent to 5.4 million tons this year. The Ministry... Read More...

KATHMANDU, Nov 13: The government needs to spend Rs 73 billion for reconstruction and restoration of livelihoods in areas of central... Read More...