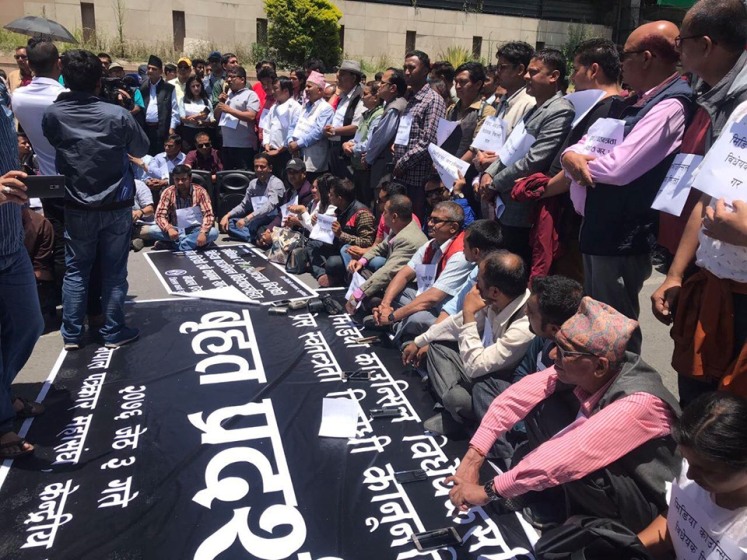 KATHMANDU, August 12: Media freedom was what Nepali journalists and civil society activists fought for decades in Nepal until democracy was restored in the country in 1990. The Nepali media fraternity celebrated the abolition of the Panchayat system, which put harsh restrictions on civil liberties including press freedom for 30 long years. The reason: the new constitution promulgated after the success of the people's movement in 1990 guaranteed press freedom, paving the way for the establishment of a number of professional media houses at the initiative of the private sector.

Little over 30 years down the line, the issue of media freedom has once again been in the spotlight in Nepal. This is not because the government has amended the constitutional arrangement that guarantees media freedom but because of a number of factors including the proliferation of digital media outlets including social media platforms that have contributed to the rapid erosion of media credibility.

The proliferation of digital media platforms including social media as a result of increased access to the internet among people has made things much easier in terms of transmitting information. This has helped the people stay connected with the people living across the world.

As social media platforms have also transformed an ordinary person into a ‘media content generator’, they have proved to be a double-edged sword in terms of the credibility of media in countries like Nepal where media literacy is still not high. “The digital platforms including social media have made it easy to spread disinformation and misinformation. As media literacy is not high in Nepal, people tend to believe what is transmitted through the digital platforms including social media as the content of the mainstream media. They start questioning the credibility of the media in general once the news they see or read on social media platforms are proved wrong,” says Babita Basnet, a media rights activist and editor of Ghatna Ra Bichar — a Kathmandu-based vernacular weekly.

Except for a small percentage of ‘media literate’ people, most others are found relying on the information that is widely shared on social media. "It is seen that the majority of people are unable to distinguish whether the news appeared in a mainstream daily or social media platforms like Facebook. This has contributed to exacerbating the situation of misinformation and disinformation in Nepal,” says Basnet.

The mainstream media follows a certain editorial process of news collection and verifies the news collected to ensure accuracy, balance and credibility through a rigorous gatekeeping process. But with the rise of social media platforms and the ability of even ordinary people with no experience of journalism to start an online news portal, such editorial processes are not strictly followed.

The mainstream media follows a certain editorial process of news collection and verifies the news collected to ensure accuracy, balance and credibility through a rigorous gatekeeping process. But with the rise of social media platforms and the ability of even ordinary people with no experience of journalism to start an online news portal, such editorial processes are not strictly followed. According to the Department of Information and Broadcast under the Ministry of Communication and Information Technology, there are a total of 3,181 online news portals registered with it by the end of the fiscal year 2021/2022 i.e. mid-July.

The flip side of such a situation is that people tend to make ‘uninformed’ opinions about the media as a whole and increasingly question the credibility of the mainstream media. “Social media platforms have already become an important challenge. Even a section of news portals are posing the same challenge. They are grossly misused to spread disinformation. These have raised questions on the overall credibility of media among the people,” adds Basnet.

The media is one of the hardest hit sectors by COVID-19 in Nepal. As a consequence, media houses were forced to either lay off their employees and downsize their operation or suspend some of their publications. The pandemic also made media houses unable to inject additional investment to enhance the skills of journalists to tackle the challenges posed by disinformation and fake news.

The lack of investment to hone skills of journalists to tackle these newly-emerged challenges has a direct bearing on the credibility of media. While the mainstream media has failed to counter disinformation or fake news, it is, at times, falling prey to disinformation and misinformation. “When fake news is circulated by the mainstream media, the same content is picked up by social media. This has only made things worse," argues renowned fact checker Deepak Adhikari, who formerly headed South Asia Check.

Another disturbing trend that has been observed in Nepal is that social media including Facebook and TikTok have become the main source of information to the common people of Nepal in recent years. As the country has a huge number of social media users, the spread of misinformation and disinformation has been a major challenge

Another disturbing trend that has been observed in Nepal is that social media including Facebook and TikTok have become the main source of information to the common people of Nepal in recent years. As the country has a huge number of social media users, the spread of misinformation and disinformation has been a major challenge. "TikTok, for instance, was originally meant for entertainment purposes. But as its subscriber base has increased significantly, this social media app has emerged as the primary source of information to many in Nepal," adds Adhikari.

A private YouTube Channel or Facebook page or a Twitter account that serves 'spicy' contents may have more readers than mainstream media that follows strict editorial guidelines before disseminating any news or information. Things only get worse when people believe more in the news disseminated by social media than the mainstream media. "This poses a challenge for mainstream media to restore their lost credibility. This is not possible until media houses are ready to invest in their human resources," adds Adhikari.

Press freedom is always under threat in the absence of public support. The challenges of press freedom can be overcome only when the general public is aware of the importance of press freedom and extends support to the cause of press freedom when needed. But when media credibility is under question, the rulers with autocratic ambitions often take this as an excuse to curb media freedom.

“When there is no media credibility, there is no public support to safeguard media freedom. This creates a hostile attitude of people in general toward the media and journalists. They even support the idea of formulating draconian media laws. The rulers tend to seize such an opportunity to muzzle the press. Nepal is no exception to this," argues media freedom activist Tara Nath Dahal, who also heads Freedom Forum.

In a disturbing development, we can see trolls against journalists in social media when they are harassed or physically assaulted. There is even online trolling to support such actions, thereby encouraging the government authorities concerned to criminalize the media related laws.

In a disturbing development, we can see trolls against journalists in social media when they are harassed or physically assaulted. There is even online trolling to support such actions, thereby encouraging the government authorities concerned to criminalize the media related laws.

In all democratic countries that honor press freedom, the media is governed or regulated by civil laws. In Nepal as well, Nepal Press Council-- an autonomous body with the representation of experienced media persons and lawyers in its leadership -- has been established to regulate the media and enforce the code of conduct for journalists and media houses.

But in recent years, the Press Council has been rendered almost defunct and laws meant to regulate the media are being increasingly criminalized in Nepal. This trend has increased significantly in recent years as evident in the arrests of a number of journalists as per the Electronic Transaction Act (ETA), a law originally meant to tackle cases related to electronic business transactions. “Although there is a global campaign to decriminalize media related laws, it is just the opposite thing that is happening in Nepal," laments Freedom Forum Chairman Dahal.

As a matter of fact, each successive government in Nepal in the past few years has been trying to introduce online media regulation or broadcast media regulations with an aim to curb their freedom. Ironically, there seems to be a larger public support to introduce such measures.

Such a situation is helping the government to criminalize media related laws. The laws meant to regulate the media are being increasingly criminalized. This trend has increased significantly in Nepal in recent years.

Some of the media related legislations such as the Information Technology Bill, Media Council Bill, Mass Communication Policy, Social Media Directives, Public Service Broadcasting Bill that the erstwhile KP Oli-led government tried to introduce with an aim to curtail media freedom. Taking their cue from the central government, the provincial governments are introducing similarly controversial media related bills despite protest from the media fraternity.

As the new government led by Sher Bahadur Deuba has not taken any initiative to repeal those controversial bills even after a year of rising to power in July last year, there is always a ‘Damocles' Sword’ hanging over the media. “Any future government may come up with draconian laws in the name of regulating the media. Such measures are likely to severely curb media freedom in Nepal," says Dahal, adding that all stakeholders concerned, including the media and civil society, need to be vigilant against such a possibility.

The worst is yet to come

A section of media rights activists believe that disinformation and fake news have yet to become a serious issue in Nepal. And what is seen in Nepal these days is just the beginning. “Of course, we are facing the danger. I may be wrong, but my understanding is that thus far there has not been too much organized production of fake news," argues senior journalist and rights activist Kanak Mani Dixit.

Nevertheless, Nepal already has witnessed semi-organized efforts to spread disinformation and fake news. While there are instances of prejudiced news coverage, there are also organized efforts to disseminate disinformation and fake news, the most recent example being that of the Millennium Challenge Corporation (MCC) Agreement. Fake documents were produced to discredit certain journalists, media houses and civil society leaders as the country was sharply polarized over the MCC issue a few months ago.

27 monkeys drown in pond
21 minutes ago