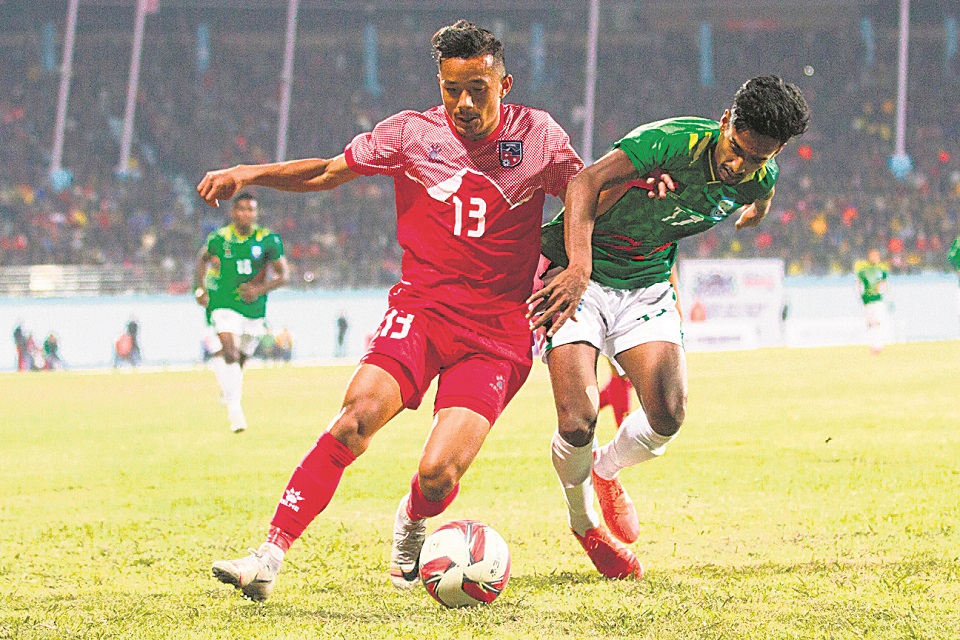 Nepal’s Tej Tamang (left) in action against Bangladesh during the final group match of the men’s football competition of the 13th South Asian Games at the Dasharath Stadium in Tripureshwar, Kathmandu on Sunday. Photo: NSC

In the final group match played at Dasharath Stadium in Tripureshwar, Bal hit a powerful strike past Bangladeshi keeper Anisur Rahman after getting a brilliant pass from captain Sujal Shrestha inside the box.

Nepal will now take on Bhutan in the final on Tuesday as the away team is still rubbing the wounds from a 4-0 thrashing it got from the SAG host on December 3.

Meanwhile, Nepal fancies a chance to repeat its heroics of 2016 when it defeated the host India to win the SAG gold. Also, the host will have a chance to equal Pakistan’s record of winning the gold four times if it defeats Bhutan.

After the goal, Bangladesh looked attacking, but the players found it difficult to create space and get through balls past Nepal’s center backs Ananta Tamang and Bikram Lama.

Nepal was mainly looking to threaten the Bangladeshi backline through crosses, but the contact was not good enough and the ball was cleared by the tall defenders on several occasions.

Nepal got a chance in the 26th minute as Suman Aryal threaded a brilliant through ball to Shrestha, but his shot was not accurate enough to threaten Rahman’s post.

The first-half ended with Nepal protecting its slim lead with good performance from the defense.  Bangladesh went into an attacking mode early on in the second-half, more so with the pressure that it had to get a win to go through to the final. But, there was no real penetration in the attacking third and the players were looking for opening via set pieces. Nepal was failing to get out of its defensive areas being subdued in the final third.

Bal had a chance to score a brace as he dribbled past two players, but his shot from the edge of the box in the 56th minute went narrowly wide, much to the frustration of the Nepali fans.

Bangladesh quickly built a solid attack as Bishwanath Ghosh crossed the ball, but it went over the bar in the 61st minute, while substitute Mohammad Ibrahim controlled the ball dribbling the ball to the left, but his shot went wide again a minute later.

Bal was again in the thick of things as he hit a freekick- but a header from Shrestha went narrowly over the bar in the 64th minute.

Nepal’s second-half performance started to show signs of exhaustion and impatience as the midfield and the forward could not link well losing the ball a lot of times.

Abhishek Rijal, who scored the equalizer in a 2-1 win over the Maldives, hit a shot after Rejin Subba and keeper Rahman went for the ball in the 69th minute. But the shot went over the bar.

Forward Shrestha played a tactical role as he kept dropping down to support the two-man midfield of Tej Tamang and Mikchen Tamang to create the chances. But, Subba kept on missing them.

KATHMANDU, Dec 7: Maldives has made a 1-0 lead against Nepal in the ongoing match of men's football at the... Read More...