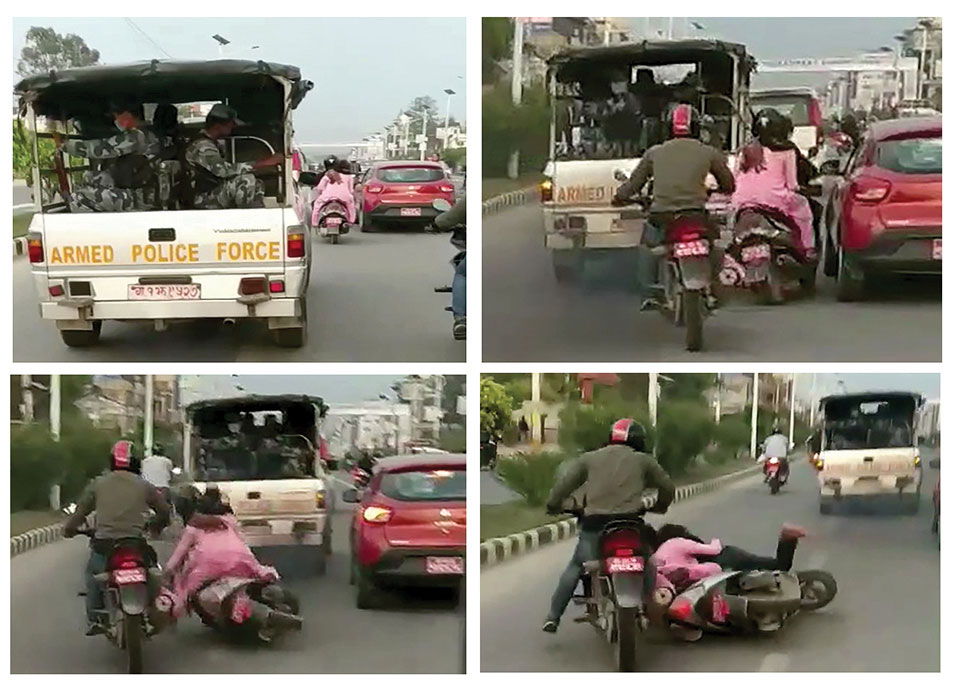 If Nepal is a country with rule of law, it should apply to everyone

Humanity and power have an inverse relationship.  If that sounds like too strong an opinion, let us see two related examples. First, the Armed Police Force’s vehicle escorting Lokendra Bahadur Chand brushed a scooter riding female in the street. The police vehicle did not stop to check if the scooter rider was alright. The police force issued a statement saying it would investigate the incident, only after a mass of uproar in the media. Second, in a similar case from a few years ago, a police vehicle escorting Madhav Kumar Nepal drove on the wrong side of the street and killed a two-years old girl. The killer driver was fined Rs 1,000 for reckless driving. The police force washed its hands off the case.

Alright, so the Nepal Police cannot be trusted to uphold the rule of law. But, what did our ex-prime ministers, who were being escorted, do in those cases? We have no idea what Lokendra Bahadur Chand has done. We know what Madhav Nepal did. He felt sorry enough to send over Rs 2, 00,000 to the family of the child. However, Bamdev Gautam, the Home Minister at that time, blamed the parents for letting the child go into the street. He did not blame the police for driving on the wrong side of the street. Apparently, when you escort an ex-prime minister, rules of the road don’t apply.

Someone once said, and I paraphrase here, “If you do not stick to your values when they are being tested, then your values are not values, they are hobbies.” If Nepal is a country with rule of law, it should apply to everyone. It should apply to the commoner, the police, and the politicians. It should apply in all circumstances, not selectively. Bamdev Gautam’s action was a disgrace, unbecoming of his position at the time. Bamdev Gautam, Madhav Nepal, and Lokendra Bahadur Chand could have used their power to ensure proper justice was carried out in the cases.

Do you lose your humanity after gaining a position of power? Nepal Police’s official motto is Truth, Service and Security. It has strayed away from that motto so many times that the motto has lost its meaning. Police officers have acted above the law in numerous instances. Forget about the top brass in Nepal Police, even a low-level policeman cannot be touched by the rule of law in this country. Justice is especially difficult to come by if police officers are involved as perpetrators or abettors. Ask Nirmala Panta’s parents.

Looking Westward
There is a healthy contingent of Nepalis who like to make social media posts showing foreign leaders not engaging in escorting practices and not halting traffic. Most often, it is the photo of the Dutch Prime Minister who rides a cycle to work by himself, sans visible escorting. There is the Japanese Prime Minister whose escorting crew follows the rules of the road, and does not halt traffic. The Japanese practice even became a plotline in the Hollywood movie, London Has Fallen.

However, what this social media contingent misses is the inhumanity displayed in other ways. Scandinavia has long been seen as the place where liberal democracy has flourished. However, many Dutch, Swedish, and Danish political leaders have capitalized on hate, and have developed hate-filled extreme right-wing politics in recent times. Japanese politicians would rather see their country’s population decline than admit foreign immigrants. Ingrained xenophobia does not allow them to see foreigners as equals. Japanese governments only recently started recognizing Japanese minorities. The United Nations has reported that hiding behind those deep bows in the Japanese population is xenophobia, which refuses to see the non-Japanese as equal human beings. The result is that 40 percent of foreigners looking to rent apartments are turned down for being non-Japanese, according to the Justice Ministry’s own survey.

The province of Quebec in Canada is trying to enact a law banning religious display of faith among public servants. That is, a Hindu worker can no longer have a tika on his forehead when in office, a Sikh cannot wear a turban, and a Muslim cannot wear a headscarf. The Quebec government says it wants its public workforce to look “secular.” Many Quebecers support this government decision. Of course, they do, because 90 percent of Quebec’s population is Christian. They don’t wear a turban, tika, or a headscarf. It is unclear if Quebec is also banning people from wearing a cross around their necks while at work.

They say all politics is local, and that we get the leaders we deserve. Do we deserve the people in power that we have? Did we put them in those positions of power because, deep within, that is the kind of people we are?

Nepal’s teams and athletes are still the underdogs like the Raptors and Warriors many years ago. But change is possible Read More...