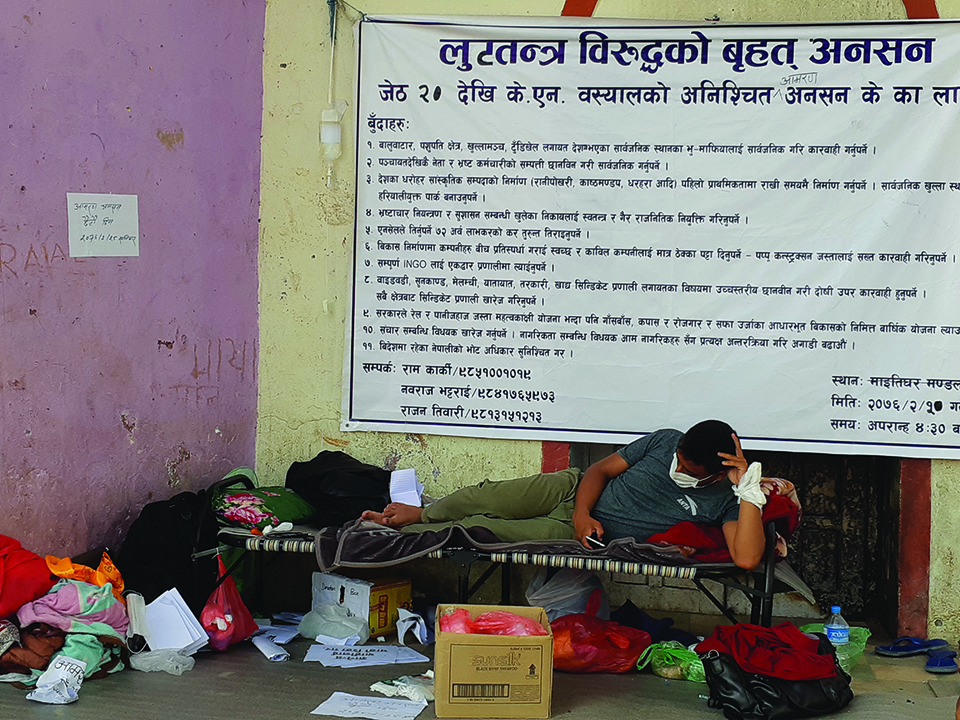 Earlier this month I stopped by Khula Manch, an open-air stage in central Kathmandu, to visit a lone protester staging a hunger strike against corruption. Under the rainbow colored stage, the lone protester lay in his cot, his wrist bandaged for an intravenous drip which hung on a stand in the corner. More than the protester himself, I was struck by the ambience of the place.

Khula Manch had once been the pride of central Kathmandu, the staging ground for so much of Nepal’s history where several calls to action were met with mass sacrifices of blood and sweat. That morning, Khula Manch bore no resemblance to its past greatness.

The large ground had been encroached upon by barricades of high corrugated sheets behind which lay stockpiles of stones and pebbles for a nearby construction. Heavy trucks plied in and out, bellowing smoke and kicking up dust. In one corner, China’s flag fluttered high above on a flagpole, marking the offices and camp (including a basketball court) of a Chinese aid agency constructing Durbar High School. The ground itself was muddy, unkept, smelling of piss and shit.

A block away was Rani Pokhari, the city pond that once carried the reflection of Kathmandu’s spiritual and material beauty. Like a woman that has been stripped of her clothes, Rani Pokhari lays there bare to the ground exhibiting her years of misuse and neglect.

If the protester was seeking a picture of despair and hopelessness as a backdrop for his hunger strike against corruption, he couldn’t have picked a more apt venue. But for all his attempts to draw the government’s attention, the lone protester was actually holding the mirror to us—ordinary Nepalis that notice but ignore the despair and hopelessness.

Khula Manch, where the lone protestor lay on his cot surrounded by filth and unkempt heritages much like the potholes in our neighborhood or the rubbish that accumulates nearby, is like the courtyard of our own homes. If the neglect of the courtyards within our own homes doesn’t give us reason to pause and introspect on our failure of citizenship, do we really have someone else to blame.

One reason that Nepal continues to struggle on its development despite a stable government and a new political order, is because ordinary citizens, you and I, particularly Nepal’s middle and upper class have abdicated their moral responsibility as citizens. We have defined and adopted a form of citizenship that allows us to justify our individual failures of responsibility as the fault of the system.

When faced with a choice of whether to give or receive a bribe, for instance, we choose to do so because we justify it as part of the system. In the process, we have created a complex system of corruption where we overlook individual responsibility and use the system to justify our private greed.

The lone protester had a list of 11 demands, which were enumerated on a large banner hung in the wall behind his cot. The demands were somewhat abstract: Investigate scandals such as the wide body, require government to prioritize and immediately complete reconstruction of national heritage sites. Even if the government wanted to respond, it is unclear what specifically they should do.

The demands drew largely from accumulated media reports and public perception. It reflected a sense of dissatisfaction. If the lone protester were an indicator of the mood of young people (the protester was young), the hunger strike described a state of discontent, a feeling of helplessness more than a call of action. Of course, we tell ourselves, such protests cannot work.

On day seven, the lone protester called it quits. (When I ask him later if he has ended his protest, he says no, only a temporary suspension.)

As the lone protester recovers, returns to his full-time job and hopefully a good meal along the way, we return to the comfort of what we knew all along. This protest was never going to work: the whole system is just too corrupt, politicians are corrupt; there is nothing that I can do except be a fool lying on a cot, hungry in the middle of filthy Khula Manch.

Corruption is pervasive across all layers of society. It has infected not just our systems but our homes, fraying the distinction between what is right and wrong. When corruption is this pervasive and so deeply entrenched, there is very little that institutional response, like setting up investigative agencies or institutions, can do to prevent it.

If there is an industry of influence peddlers and corruption brokers, there is also a counter industry of claimants with promises to clean up the system. Many of these are new political forces that advertise good governance, pledge to offer clean and honest leadership. Though their broad appeal currently remains limited, such forces are offering to tackle corruption through institutional mechanisms such as better policing, better oversight and stricter penalties.

Such political approaches to tackling corruption, however, continue to undermine the importance of individual responsibility and reinforces the invincibility of the system. Rather than being helpful, it perversely intensifies corruption. If the only way to tackle corruption is through access to power, then access to power becomes even more important.

To end corruption, we must reject the idea that access to power is important or critical to success. We must frame a new approach to tackling corruption, one that is built on a model of citizenship where individual responsibility matters. We must cobble a civilian response that rejects the false hope offered by political parties about the need to first come to power and then clean up everything.

Ending corruption must first starts with us individually cleaning our own courtyards. Commit not to engage in corruption and promise to report publicly when you see it. If Nepal Airline’s wide-body is such a national scandal, why are we still flying the airline? Why are agents still selling the airline’s tickets?

A few days after the protester had ended his hunger strike, I asked him why he had chosen to do this. He said that a hunger strike was a form of protest to attract attention from the government and public on the issue.

Perhaps, there is a better way.

Clean up Khula Manch, have a hearty meal there and show government the middle finger. Get on with our lives, have the will to succeed without power or influence, or at least have the courage to try. The power to end corruption lies not with the government but with us in the choices we make in our everyday lives.