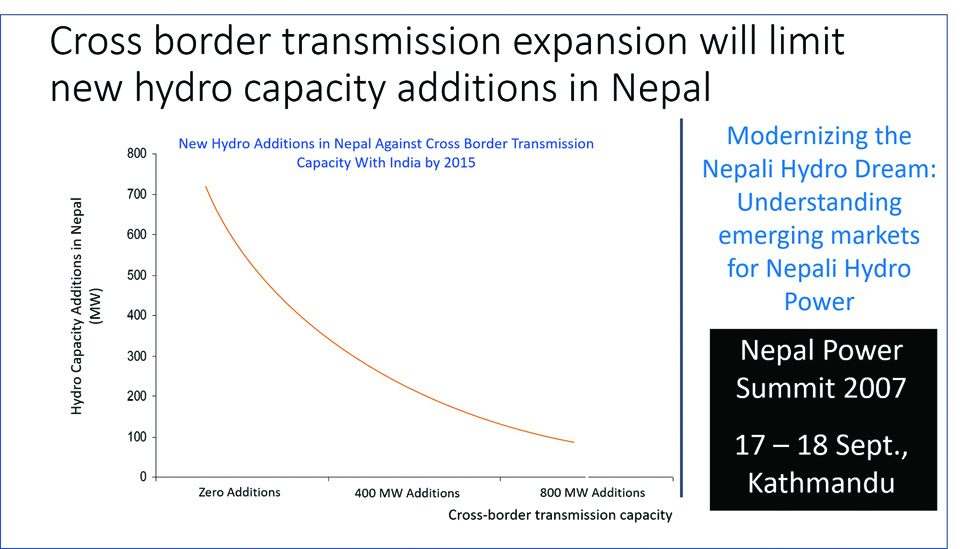 There was much euphoria after India and Nepal reached an agreement on the new 400 kV Butwal-Gorakhpur cross-border transmission line.

Government hailed it as a breakthrough, saying that it will lead to Nepali hydro power exports. The private sector body, Independent Power Producers’ Association, Nepal (IPPAN), went further stating that “10 to 12 such high-voltage cross-border transmission lines should be installed to export the country’s electricity during power surplus.”

These cross-border transmission lines between India and Nepal will not pave the way for Nepali hydro power export as imagined. Instead, these will limit the construction of new hydro plants in Nepal and make Nepal highly dependent on electricity from India.

I first offered a similar forecast at the Nepal Power Summit way back in 2007.

Based on modeling analysis I had conducted at the time, I predicted in 2007 that if Nepal were to add, say for example, 400 MW of cross-border transmission lines, then by 2015, approximately 300 MW of hydro plants that would otherwise have been built in Nepal would not be built (see illustration). As more cross border transmission lines interconnect the two power systems, I argued, fewer and fewer hydro plants will be built in Nepal.

My forecast was met with derision and I was publicly reprimanded at the conference for these views.

Like the recent euphoria, 2007 was a time of giddy optimism in Nepal’s energy sector. A Memorandum of Understanding (MoU) had just been signed with IL&FS, an Indian financial institution, for four cross border transmission lines. I had cast my analysis loosely around the Dhalkebar-Muzaffarpur transmission line, which was approximately 400 MW and was to be the first line to be built. Eleven years later, in February 2016, the Dhalkebar-Muzaffarpur line finally came into service.

History has validated my forecast. In the decade after 2007, Nepal has suffered its worst electricity crisis as construction of new plants were delayed or abandoned, supply fell short of demand and large amounts of Indian electricity were imported to fill the gap.

The Dhalkebar-Muzaffarpur line is a glaring example of how the India-Nepal cross-border transmission lines limit the growth of new hydro plants in Nepal. Yet, Nepal’s governments have chosen to ignore this evidence and returned to the same failed strategy of a decade ago.

The argument for the cross-border transmission lines has always been that it will enable export of hydropower from Nepal.

So, ask yourself, where are those exports? Now that the Dhalkebar-Muzaffarpur line is in place, why are there still no power exports from Nepal? Why hasn’t the surplus generation, that was to be exported, not materialized yet?

Many reasons will be offered: delays in building hydro plants, delays in construction of cross-border transmission lines, policy and regulatory uncertainty, investment climate and many more. Most importantly, we will be told to wait a few years for this plant and that plant to be completed, for this line and that line to be completed before we have enough generation surplus for exports.

Such reasons are merely explanations.

The underlying cause is that power production in Nepal will be displaced when Indian and Nepali power markets are interconnected. Indian power will almost always be cheaper than Nepali hydro. For Nepal, it will be cheaper to simply use power from India.

Power prices in Indian electricity markets are low. Indian power markets are still in distress with large excess generation capacity that is near stranded. The financial health of most distribution utilities remains weak. There is tremendous political and social pressure to keep prices low for consumers.

Far from being the gateway for exports, the Dhalkebar-Muzaffarpur line paralyzed additions of new plants in Nepal and enabled larger imports from India. It is these imports that helped to end load-shedding (forced demand curtailment).

But the Dhalkebar-Muzaffarpur line was also the primary reason for the load-shedding in the first place.

In 2007, the dynamics of Nepal power markets changed immediately once the MoU for the four cross border transmission lines was announced. Many Nepali hydro power plants that would have been constructed were delayed or entirely put off. Investors pulled out. Faced with the threat of cheaper electricity from India, it made no sense to build hydro plants in Nepal even for domestic consumption.

The load shedding that followed was the result of two factors. First, development of many new Nepali hydro plants was delayed or abandoned. This reduced supply. Second, Dhalkebar-Muzaffarpur line was delayed. This pushed back the arrival of Indian imports leaving a short-term gap between demand and supply—thus the load-shedding.

Had the Dhalkebar-Muzaffarpur line not been delayed, Nepal would not have endured such extensive load-shedding, but Nepali hydro plants that were displaced by the threat of cheaper Indian electricity imports would still not have been built.

Without the promise of cross-border transmission lines in 2007, Nepal would have fared better in the interim. Instead of an era of load-shedding, some 300-500 MW of new hydro plants would have been constructed between then and now.

Nepal is not ready for this competition. Our production costs are higher. Our power markets are not mature enough to handle the requirements of the Indian grid, such as the Unscheduled Interchange. Our hydro plants are still too small; our grid still too elementary to provide the economies of scale.

With cross-border transmission lines, domestic hydropower producers will not have space to grow.

Why jump into this competition and unnecessarily risk our potential on hydropower when we could still position for export while continuing to provide a secure environment for our domestic hydro producers?

The rejection of cross-border transmission lines doesn’t mean that Nepal cannot or should not try to export power to India.

Exports to India will not come from “surplus” electricity produced by small hydro plants and aggregated for sale to India. Exports to India can only come from large hydro that are designed, built and financed for selling power to India.

No country in the world has successfully exported hydropower by interconnecting power markets. Nepal will not be the first. Successful hydro exporting countries have all done it by building large hydro plants with dedicated transmission lines to the destination market.

KATHMANDU, Jan 5: The capacity of Dhalkebar substation--  the country's largest substation in Dhanusha-- has been increased. The Nepal Electricity... Read More...

KATHMANDU, Oct 16: The construction of the 400 kV Dhalkebar substation has reached the final stage, with the Nepal Electricity Authority... Read More...