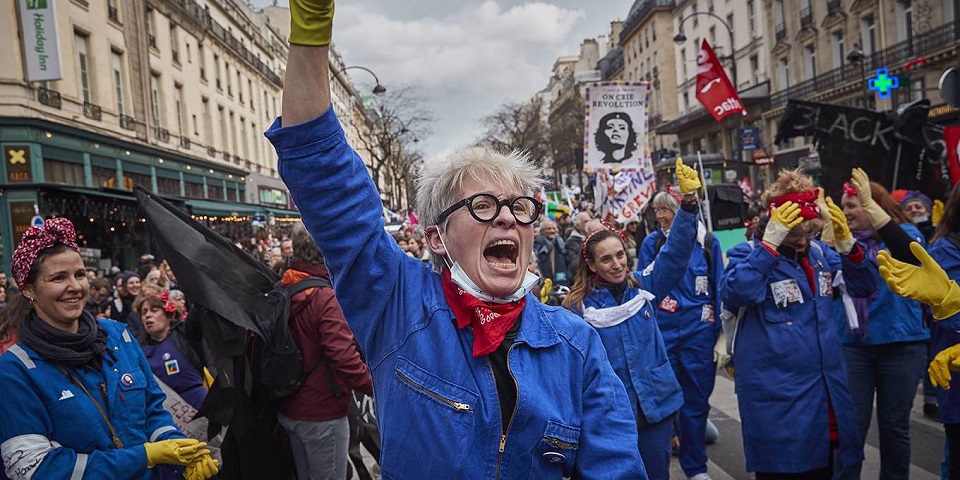 Barring a possible sudden second wave of COVID-19, many countries may now be past the peak of the pandemic in public-health terms. But the peak of social, economic, and political anger is most likely still to come.

PARIS – The small landlocked Himalayan kingdom of Bhutan, which lies between China and India, is not only a tourist mecca. The country has also long pioneered the concept of “gross national happiness” (GNH), which its architects regard as far more comprehensive and accurate than the conventional measure of an economy, gross national product, or GNP.

But with the COVID-19 pandemic triggering unemployment alarm bells almost everywhere, it may be time to consider establishing a third indicator: gross national anger, or GNA. Why should we not measure the stirrings of the human soul as we do the Earth’s entrails, using a Richter scale of emotions? Such an approach might help governments to act before popular anger boils over. As the nineteenth-century Italian statesman Camillo Cavour argued, “reforms made in time weaken the revolutionary spirit.”

The “Age of Anger”—the title of a 2017 book by the Indian essayist Pankaj Mishra—may well be upon us. Anger is no longer largely the preserve of the peoples of the Global South. It has become truly universal, as amply demonstrated in the United States by the large-scale protests that have erupted over the killing of George Floyd—an unarmed, subdued black man—by a police officer while three others kept appalled onlookers at bay. For the furious crowds gathering in all 50 states, the days of tolerating such abuses of power—and the systemic racism that encourages and facilitates them—are over.

Barring a possible sudden second wave of COVID-19, many countries may now be past the peak of the pandemic in public-health terms. But the peak of social, economic, and political anger is most likely still to come—and, in this sense, some countries, such as France, are more vulnerable than others.

The more that power is centralized and embodied in one person, the more fragile it is. In the United Kingdom, for example, the queen’s symbolic power is separated from the real power wielded by the prime minister. In France, by contrast, both types of power are vested in the president, who is both stronger and also more vulnerable as a result.

In addition, the more that popular mistrust of the state and its representatives feeds on previous negative perceptions, as in the case of France’s Yellow Vest movement, the more likely it is that fear and humiliation will result in anger.

In the era of COVID-19, the primary cause of anger is the sense of inequality regarding the risk of infection. True, almost everyone accepts the greater vulnerability of the elderly as a fact. But when people in positions of authority and relative safety tell those who are most at risk that the protection they demand is unnecessary, many suspect them of dishonesty as well as incompetence. Anger explodes.

The ongoing “quarrel of the masks” in France aptly illustrates this phenomenon. How dare white-collar workers, many of them protected by their ability to work from home, tell blue-collar workers on the frontlines of the crisis that their fears are exaggerated? Some wealthy and powerful people have also died from COVID-19, but that is not enough to create a sense of justice.

Asking citizens to spend more time at work in the current exceptional circumstances is not in itself shocking. During Asia’s severe economic and financial crisis in 1998, for example, citizens in countries such as South Korea worked much longer hours than before (just as France was embarking on a 35-hour workweek). But it is very difficult to ask people to make an extra effort when trust and equal, shared commitment are lacking.

Likewise, we cannot realistically expect collective responsibility if the sense of unequal destiny is too strong and that of solidarity too weak. This is even more the case when public anger precedes the pandemic.

Indeed, the second main cause of today’s anger is cumulative: annoyance, like fear, adds up, and today’s anger opens the scars of yesterday’s furies. It is all too easy for someone to lapse into rage when they are already filled with fear and humiliation.

Happiness, on the other hand, cannot always be explained. It is often the product of a natural disposition or a reflection of a personal attribute (although it is no doubt easier to be happy when you are rich and healthy).

Anger is not only explainable, but also seeks scapegoats. Like the coronavirus itself, it seeks to attach itself to something, and some political leaders are more vulnerable than others in this regard.

France and the UK again offer a particularly interesting comparison. A majority of British citizens may think that Prime Minister Boris Johnson has managed the country’s public-health crisis incompetently, but many continue to like him—and not only because of Johnson’s personal battle against the virus.

This may be profoundly unfair, but it is a fact. As French President Emmanuel Macron has learned the hard way, there is no objectivity when it comes to anger. (Indeed, Johnson’s own approval ratings have fallen recently, mainly because of his refusal to fire key adviser Dominic Cummings, who previously drove across England in what most voters regard as a breach of national lockdown rules.)

Although the fear that dominated the first stage of the COVID-19 crisis will persist as long as there is no vaccine, anger is now taking over. The only safeguards are tangible demonstrations of solidarity between citizens and countries—in part through taxes and wealth redistribution.

The first phase of the pandemic has been largely bad for populists, with countries where they are in power among the hardest hit by COVID-19. But if the current mounting anger is not successfully contained, then the second, economic phase may fuel their comeback.