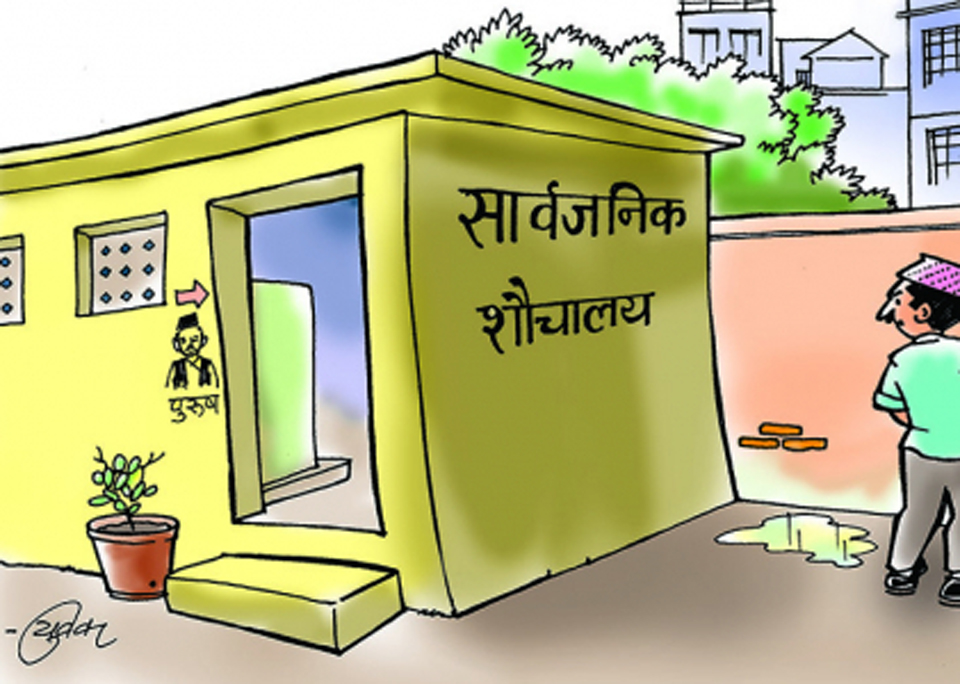 NEPALGUNJ, Dec 13: There are 24 houses in a row at Ghasiyaran Tole of Nepalgunj Sub-Metropolitan City. The settlement has got the name as most of people have the occupation of cutting grass and selling it for livelihood which is their traditional occupation. ‘Ghas’ means grass and’ Ghasiyaran’ refers to a person who cuts, collects and sells grass.

Most of the people at the settlement are poor and don’t have private toilets at their homes. However, they visit the public toilets allocating some amount of money which they earn from their traditional occupation.

As per the rule of the toilet, each household needs to pay Rs 150 a month. If any family splits, according to the rule made for the community toilet, it means another Rs. 150 to be paid. At the same time, they have to strive hard to make their ends meet.

The story of their plight doesn’t end here. If any person visits their homes as a guest and uses the toilet, the host family is forced to pay an additional amount the following month. A local Makhana Ghasiyaran says, “Guests come to ours at times to attend the social functions including weddings, as a result, our bills go higher next month.”

According to Makhana, they have to confront to complaints and restrictions if they fail to pay on a regular basis. Chhota Ghasiyar who heads the seven-member family laments, “ I was not able to pay the charge last month. Consequently, I have to manage Rs 300 by the end of this month at any cost.”

More than 100 members of 24 households of Ghasiyaran Tole use the paid-toilet. The toilet has capacity to host six persons at a time.

The Ghasiyarans who earn a meager sum by cutting grass are now plunging into severe economic crisis as they are compelled to spend their paltry income for toilet charge. At the same time, they have been hit hard by the shortage of grass following rapid urbanization in recent years.

Nepalgunj sub-metropolis informed that it has not been charging any fees for toilet use. However, the ward office has been collecting monthly charges from those households. The chairperson of ward 8 Surendra Gupta said, “We must collect fees from them as we have to maintain its sanitation and pay an employee.”

An Indian village's fight to take the 'poo to the loo'

INDIA, Oct 2: Indian farmer Kokila Damor always looked forward to visiting the city hospital, but only so that she... Read More...

KOHALPUR, May 10: One Indian national was killed in a motorbike accident that took place along Kohalpur road section  on... Read More...