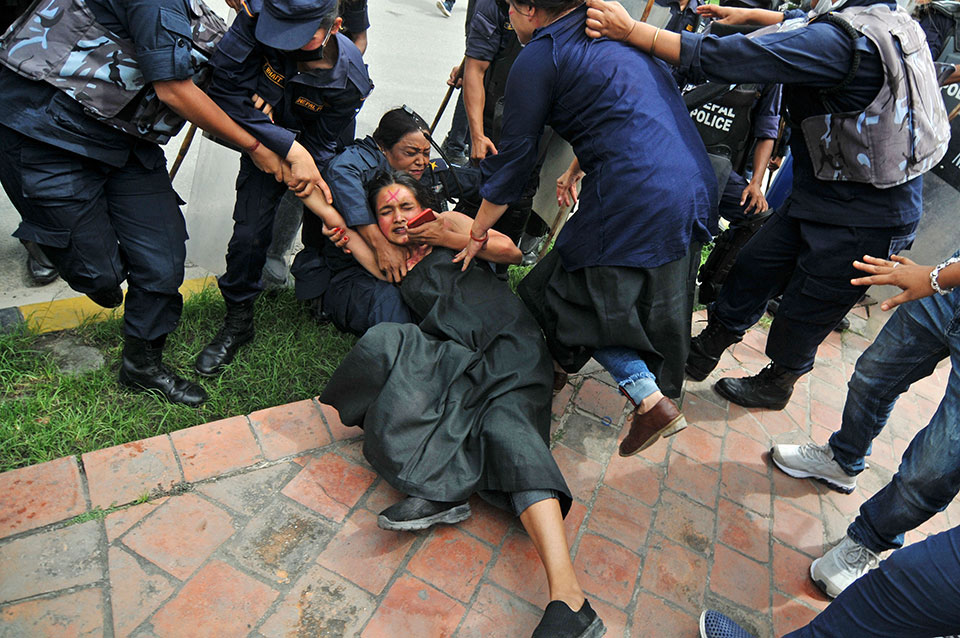 KATHMANDU, Aug 25: Exactly a week ago, women activists, who had put on petticoat were arrested by the police as they staged a demonstration against rape at Maitighar Mandala. The activists, led by Sabitri Subedi, wore a black petticoat, a color that symbolizes a protest.

Their bodies had slogans against rape and for justice. In front of vigilant police personnel, who were watching their protests from distance, the demonstrators called for tougher punishments, including the death penalty to rapists. Halfway into the protest, the police arrested the activists, including Subedi, the campaigner, Riya Bhandari and Sandhya Lama, a transgender woman for 'inappropriate clothing'.

The arrest has sprouted a chain of reactions and responses on the government's action. Although wrongly interpreted, following the arrests, users in social media scorned double standard of the government: the police or the government didn't intervene when models posed in bikinis,  but expressed reservations when women fought for their rights against social injustice wearing petticoats.

However, was the petticoat protest a 'petty' as reflected by the action of both the government and the security agency? DSP Mohan Thapa at the Metropolitan Police Range, Kathmandu said that their intervention was not toward the protest. It rather was against their form of protest. "We intervened because they were half-naked in public space," Thapa said as he expressed commitment of the police to strengthen security and tougher punishment to the culprits. SP Ramduatta Joshi, of Metropolitan Police Range, Kathmandu echoed the same. "We were not against the protest. We only had an objection to their dress attire," he said adding that the demands were right. "However, the way they protested was inappropriate against our societal norms."

While debatable, activists, as well as its supporters, see no harm in the attire. Sita Bohora, President of  Conflict Victim and  Single Women Development Center, an NGO working for single and conflict-affected women for their socio-economic development in Nepal, said that she supported the protest completely. "What was embarrassing was police intervention in a silent protest," she said.

A promising young leader from Bibeksheel Sajha Party, Ranju Darshana said that she respected the protesters and blamed the government's apathy to curb increasing violence against women. "Anyone criticizing the protesters for being vulgar is utterly wrong," she said as she urged them to divert their attention into more pressing issues of the country and escalating violence against women.

"First of all, when the police knew it was a women-led protest, female police personnel had to be there. The presence of male police in the protest is intolerable," she said.

Darshana called for tougher actions against culprits, including an end to political impunity, and justice for the victim and her family. 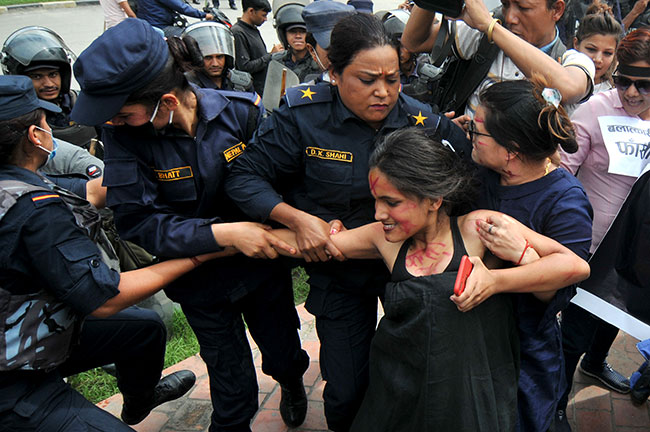 There were 105 cases of rape, including four gang rapes, across the country in the last three months. These cases and the numbers are deeply disturbing. Such incidents must make us ponder the direction of our society and our collective silence and the lack of willingness to act, to do something to stop this unimaginable crime.

While the numbers of rapes are increasing, it is obvious to have aggression towards the culprits that are not getting hold of effective punishments.

Menuka Thapa, president of Rakshya Nepal, an NGO working for the sexually exploited girls, women and their children since 2004, said that she was pleased to see youths becoming more aware and vocal about social injustices and crimes. "It was heartwarming to see youths come out from their homes and on to the streets to fight against injustice," Thapa said. "However, it was wrong of the police (all men) to come and intervene."