Tornado victims ‘to get new houses before new fiscal year’ 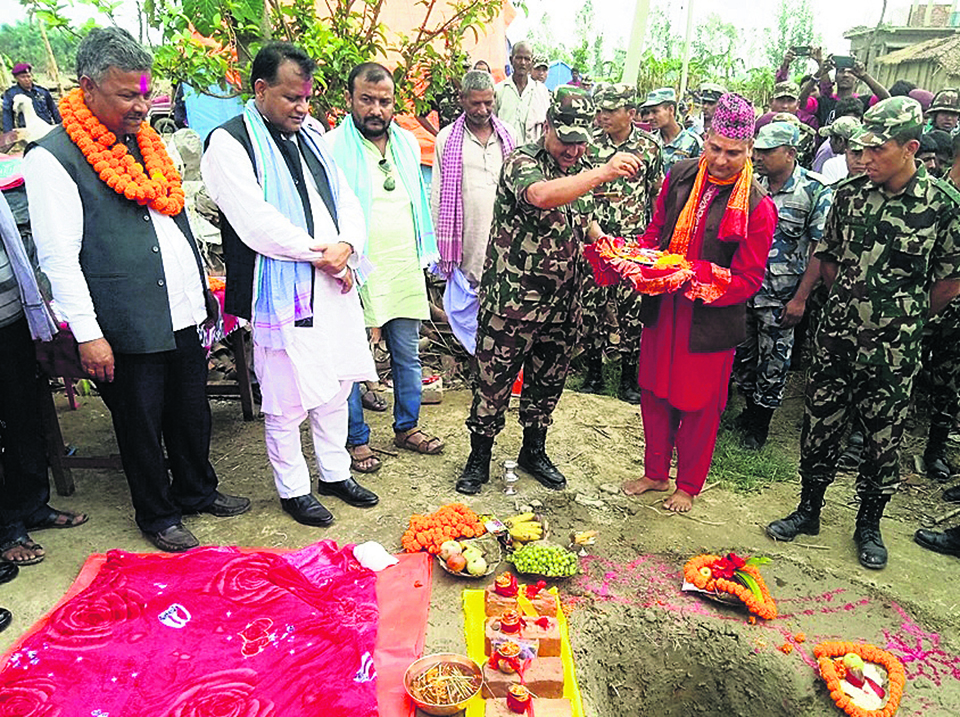 BARA May 5: The reconstruction of the houses damaged by the first-ever recorded tornado in Nepal that struck the southern parts of the country on March 31 began on Saturday.

After visiting the 10 affected areas of Bara, a deputy prime minister of the federal government, ministers and senior ministers of Province 2 on Saturday laid the foundation stone of the ‘People’s Housing Project’. The reconstruction will be carried out in three phases, according to Colonel Paras Bikram Shah, commander of the Chandan Battalion of Nepal Army which is leading the construction works.

In the first phase, 482 households will be rebuilt within a month. As per the plan, all houses will be rebuilt before the beginning of the next fiscal year, says Shah. As informed by   Nepal Army Engineer Mahendra Sijapati Thapa, each of the new houses of the tornado victims will have two rooms, a veranda and a bathroom.

A budget of Rs 545,000 will be spent on the construction of each house. The devastating tornado had affected various villages of eight local units of Bara. A total of 1,362 households were completely damaged by the unprecedented disaster.

However, the victims lament managing a large family will be a challenge in the house to be provided by the government. Jokhu Baitha of Kalaiya Sub-Metropolitan City-13 says it is impossible for his 12-member family to live in the two-room house. Earlier, they used to live in a bamboo house, which had four rooms.

He further added that 35 households in Pachrauta Municipality and 272 houses in various villages of Parwanipur Rural Municipality will be rebuilt under this program. On Saturday, Deputy Prime Minister and Minister for Defense Ishwar Pokharel laid the foundation stone in Purainiya of Feta, Deputy Prime Minister and Minister for Health and Population Upendra Yadav in Chainpur of Parwanipur, and Home Minister Ram Bahadur Thapa in Khutwa of Prasauni.

Similarly, other dignitaries such as Chief Minister Raut laid the foundation stone in Phulwariya and Devtal of Kalaiya and Minister for Infrastructure and Transport Raghubir Mahaseth among others laid the foundation stones in Hardiya of Subarna, according to Nepal Army. Speaking at a program, Defense Minister Pokharel stated that the government handed over the construction work to the army to make sure that the victims get their new homes before the beginning of the next fiscal year.

Meanwhile, Chief Minister Raut appreciated the government led by Prime Minister KP Sharma Oli for “understanding the problem of the victims and handing over the construction work to the army.” Speaking at the program, Lieutenant General Gaurav Tondon said the responsibility given to the army by the government is a challenge as well as an opportunity.

Govt’ll build Budhigandaki on its own: Energy minister

KATHMANDU, May 9: Minister for Energy, Water Resources and Irrigation Barsha Man Pun has said that the government will build the... Read More...

Media houses to be prodded to provide minimum wages to journalists: Minister Basnet

KATHMANDU, August 27: Minister for Information and Communications Mohan Bahadur Basnet has said that the media houses would be prodded... Read More...