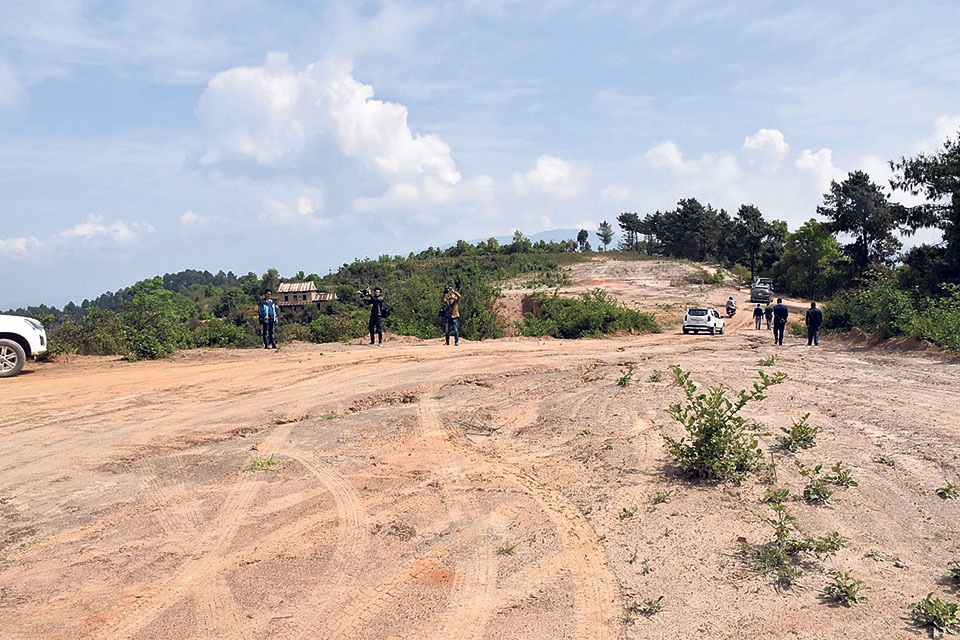 Nagidanda, which is located between Panauti and Banepa, is one of the sites surveyed on Tuesday. Photo: Madhusudan Guragain/Republica

BANEPA, May 2: Ministry of Culture, Tourism and Civil Aviation is planning to build an alternative airport in Kavrepalanchok district in order to reduce traffic congestion at Tribhuvan International Airport (TIA).

As the increasing number of flights is causing flight delays and even cancellations, the ministry felt that building a new airport is the only alternative to deal with the situation, Minister for Culture, Tourism and Civil Aviation, Rabindra Adhikari, said after making field visits to proposed sites of Kavre on Tuesday.

Officials of Civil Aviation Authority of Nepal (CAAN) and a group of experts visited three sits in Panauti, Banepa and Dhulikhel municipalities of Kavre on Tuesday.
The team visited Nagidanda of Panauti, Thulichaur near Devithan of Dhulkhel and Thulichaur Chisapani of Patlekhet on Tuesday. Prior to this, preliminary study has also been conducted in Bhakundebesi and Pachkhal.

“We will select the best site among them for alternative airport,” Minister Adhikari told Republica. He also directed CAAN to form a group of experts for survey of all these sites and submit report to the ministry within 15 days.
"After receiving the report, we will allocate budget for the project in the coming fiscal year,” he added.

Similarly, Sanjeev Gautam, director general of CAAN, said that his office was studying the feasibility of building a short take-off and landing (STOL) aircraft under the Domestic Aircraft Divert Plan. “We are building the airport at Kavre targeting domestic flights, mountain flights and helicopter flights,” Gautam said. “Traffic congestion at TIA will come down by around 20 percent if the project materializes.”

According to CAAN officials, the alternative airport will have a 1,200-meter runway and the capacity to park up to 30 aircraft.

An aviation expert also said that Nagidanda looks more visible compared to three sites visited on Tuesday. “Nagi Danda is the most suitable of the three sites as it has road access from three sides. It is also connected to the Araniko Highway," the expert said, adding: “As the Araniko Highway is being upgraded into a six-lane road in the near future, there won't be traffic congestion. Air passengers can drive to the airport easily.”

Nagidanda lies only three kilometers away from Araniko Highway. According to CAAN, 65 hectares of land will be needed to build the airport.

“Private sector is always with the government to build the alternative airport in Kavre. Not only foreigners, we are also suffering for traffic congestion at TIA,” Sur Krishna Baidhya, central member of Federation of Nepalese Chambers of Commerce and Industry (FNCCI), said. “The private sector is ready to contribute in the project if the government brings a policy of ensuring participation of private sector in such infrastructure work.”

TIA is handling 319 domestic flights and around 100 international flights every day, according to CAAN.

May 3: Ministry of Culture, Tourism and Civil Aviation has formed a six-member team of experts to conduct technical study... Read More...

KAVRE, Aug 13: Names of trekkers, mountaineers and support staff, who lost their lives during trekking and mountaineering activities in... Read More...

KATHMANDU, Aug 5: The Nepal Association of Tour and Travel Agents (NATTA) has urged the government to operate the Tribhuvan International... Read More...