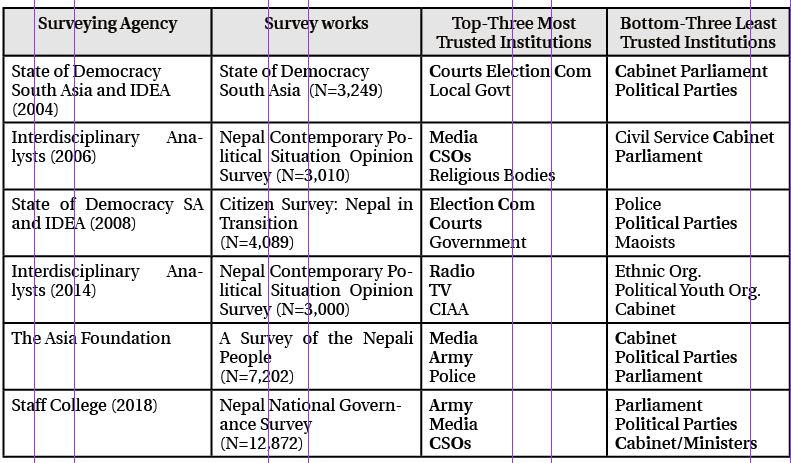 Political parties, parliamentarians and government ministers feature as the most distrustful institutions in almost all surveys

From the very start, I have been arguing that the government’s two-thirds majority claim is nothing more than political match fixing, that the two-headed communist unification is a sham and that Prime Minister K P Sharma Oli serving for a full five-year term is elusive. It will be a New Year greeting if his administration manages to remain intact in 2019.

There is already a widespread disbelief, discontent and disenchantment with the government’s lacklustre performance. The government is as fragile as the PM’s health and as volatile as Prachanda’s speech. The catch phrase “prosperous Nepal, happy Nepali” has been reduced to an exercise in verbosity.

Could anyone substitute PM Oli? I will say no.  We have come to ‘there is no alternative’ (TINA) situation.

Recently, The Guardian, a British newspaper, carried a special report on the rise of populist politics almost all over the world. The report pointed out, among others, the decay and deterioration in institutional trust as a factor behind the rise of populism. Modern liberal democracies are based on a complex web of trust relations and when there is a breakdown in trust relations, the entire public and political life become a sham. When institutional inertia sets in it becomes too difficult to bring changes in the system. One example of how institutional lethargy has set in our system is the heinous rape and murder case of a teenage girl Nirmala Panta. We have come to a point; where public distrust police investigation. I suppose the same goes with the investigations into gold smuggling, money laundering and procurement of aircrafts by Nepal Airlines.

There is a complete loss of credibility with state machineries. The social trust or the social capital that is so much required for development is gradually evaporating. We need to understand why and how this institutional decay, the sloth and apathy has seeped into our system.

The table alongside presents a summary of findings extracted from various surveys organized by different institutions, at different periods, on public trust among the public institutions in Nepal. For the sake of simple comparison and presentation, only the names of the three institutions, ranked at the top and the bottom of the list, are presented. The table also includes the names of the surveying agency, the survey work, the year in which the survey was published and the sample size (N) of the respondents.

We can derive one and only message from the survey results: If reforms are to be introduced in Nepal, the sector requiring the greatest attention is the political sector. In the absence of political reforms, we will continue to slide down. Without political reform, no government will take us out of this vicious cycle of institutional decay and social distrust. However, we are into a paradox. The reforms come from same breed of politicians who are listed as the most distrusting agents of the society.