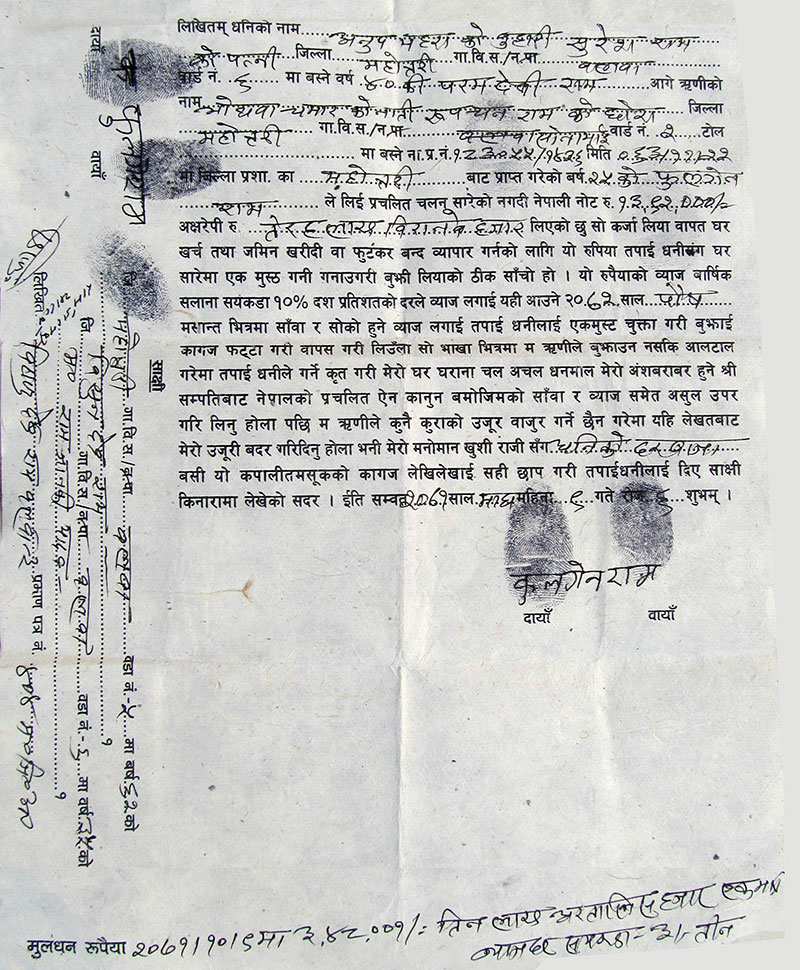 As a Judicial Officer posted in the Southern plains of Nepal, I take this as an opportunity to serve the people, who are litigants before the court, of my district where I was born and brought up. I strongly believe that an educated youth should take the side of rationality, not political parties. Here, in this article, I will share some of the untold areas of the litigations which were and are acting as slow poison for Madhesh and Madheshi community members.

In Madhesh, it’s a norm that everyone will not only grow and survive but also leave opportunists scot-free to earn out of proportion. This is true in case of the “Madheshi messiahs” and NGO activists too. Terai courts are flooded with litigations for no good reason but the Madheshi parties at the helm rarely launch any awareness program or mechanism for alternate dispute resolution.

In a democracy, political parties in power do have the people’s mandate to rule in accordance with the constitutional spirit. The tendency to invoke court jurisdictions with ulterior motives is neither good for society nor does it supplement the social fabric. That’s why, on and off the bench, judges and court officials have persistently spoken against the flood of litigation and frequent recourse to courts; as more cases result in more disputes in society and more disputes ship more frustration and anger. Let me share a popular money-lending practice of Terai which is emerging as a bane, not boon, for underprivileged people.

In Madhesh, it’s a popular practice of taking loans from the moneylenders at the time of need. In fact, borrowing and lending is not an illegal tender but the truth and fairness ought to be the two attributes that need to be upheld in the entire money-lending business.

The lenders first inquire about the borrower’s status and loan security. To put it simply, the moneylenders don’t love to lend money to a person who has no assets that could be auctioned by the court at the instance of non-payment of loan.

I find the district courts of Terai as good platforms for money lenders to realize their loans from defaulting parties. On a daily basis, Terai courts register a plethora of cases of non-payment of loan as mentioned in the deed of loan (Tamasuk). The plaintiffs, the loan providers, file plaints with the intent to realize the principal amount with interest.

What annoys me is that there is no one to ask the money lenders, who appear as plaintiffs, about their source of income. In Terai, there is a practice of claiming thrice in case of non-payment of loan or default. Let me explain this situation with an example.

If Mr Ram Avatar, who is a moneylender, provides loan to Mr Harinath with a sum of Rs 500,000, then Mr Ram Avatar will prepare a loan deed of Rs 1500,000 in which Mr Harinath will agree, on record, to pay Rs 1500,000 with interest at the rate of 10 per cent annually within a stipulated period which is prescribed in the deed. This has become a reality in Terai.

The high voltage drama starts in case of any default or breach of agreement or say in case of non-payment of the loan on time. The moneylenders find the benches of courts as perfect forums for realizing their claims. As the law recognizes documents, which have evidentiary value, the courts pass judgments in favour of the moneylenders who have produced the original copy of the loan deed. So, the money lending business has become an easy means of earning out of proportion.

A judge recording statements in money lending cases (or cases relating to loan deeds) does not inquire about the source of income of the loan provider. In courts, there is an established practice of not asking a money provider to prove if there was any banking transaction done by him on the date on which he provided the sum to the borrower. So, in loan cases, the source of income remains outside the purview of judicial determination.

Though the National Civil Procedure Code obliges the lenders and borrowers to register their Tamasuk at local bodies, the prevailing laws don’t empower the officers of the local bodies to obligate the lenders to reveal the source of income. In Dhanusha District Court, of the total cases filed in a year, loan cases have a share of more than 70 per cent.

On the other hand, there has been a norm in Terai to file a suit of divorce at the instance of any miscommunication or disputes in marriage. These days, the rate of divorce is growing in Terai. At times, I see a disgruntled bride pulling a groom from bedroom to courtroom for a heavy sum of alimony. This is something that needs to be prevented for the cause of society.

Terai courts are also filled with litigations of land encroachment. The act of encroachment is not done by someone who is unknown but by their neighbors and blood relatives itself. Over and above all this, the family members, who had the experience of sharing the same kitchen, file cases against their own coparceners for claiming their share of property. It’s a common practice in Terai that brothers become parties to a case after their marriage for claiming their part of ancestral (joint) properties. I feel one side approaches the court for justice, while the other for satisfying their ego. Some say, it’s “Mochh  ke ladai” (the fight for pride/ego).

At this pretext, I believe, though we have the most comprehensive constitution, we lack comprehensive legislation to deal with the bizarre loan deeds.  Money lending has emerged as a profitable business in Terai. There is no law on record that obliges money lenders to justify their source of income. If the borrower has taken a loan of Rs 1,000,000 he will be asked to agree on a loan deed of Rs 30,00,000; there is a mutual understanding that if the borrower reimburses the loan on time, he has to pay Rs 1,000,000/- with interest but in case of any default, he has to face legal consequences and the law will recognize the things stated in writing, i.e., the loan of Rs 30,00,000.

It’s high time we enacted a law to protect the interests of borrowers and curb the illegal or oppressive policies and procedures of the lenders. In fact, it’s shameful for a rule of law country to scot-free a bunch of people engaged in turning their black money into white money in broad daylight. Poor people are becoming poorer and the rich becoming richer and that too in a legally protected manner. Isn’t it a shameful business? Time to think!

Undoubtedly, Madhesh and the Madheshi society cannot embark on a path of progress unless the mindsets change for the better. For that to happen, political will is a must. In Terai, if there is something which is profitable then its none other than ‘Madhesh politics’. People who are affiliated with regional politics here have been successful in holding vital government offices and political appointments. And, society has got nothing in return. The messiahs have made their fortune, not Madhesh.

As the courts in Terai are flooded with litigations, the need of the hour is to constitute separate benches for dealing with family disputes or cases of civil nature. Like in India, we should have family courts, civil courts or session courts to deal with criminal cases. The government could launch different legal aid programs, like “Meet the Judges” or legal camp, to raise awareness in society. After all, judicial pills cannot cure all ills.

(The author, formerly a Lecturer of Law at Kathmandu University School of Law, is a Judicial Officer at Dhanusha District Court, Janakpurdham.