Five years after the constitution, where do we stand? 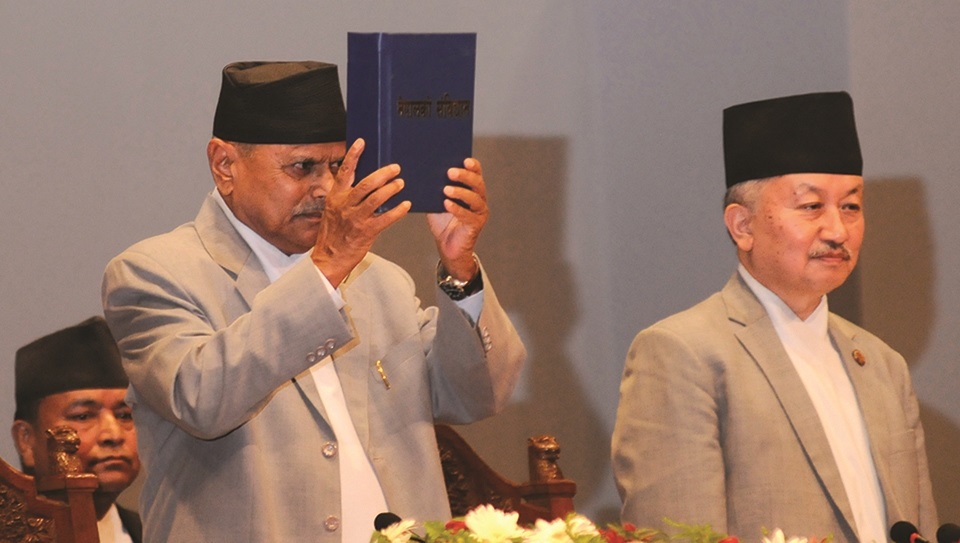 We must not be swayed by the narrative of the campaigners who first launched protests against the constitution, imposed embargo in collusion with foreign power against their own motherland who now have secured vital public offices.

The federal democratic republican constitution of Nepal is turning five this Asoj 3 (September 19). The document, in principle, addresses the needs and aspirations of the citizens who are united together for the purpose of resisting external intervention, upholding rule of law and preservation of sovereignty and integrity.

A constitution is a matter of pride for every country and the people living there. The ratification of the constitution is a sign that the country has geared up for consolidating the agendas of different political movements in the state. With this spirit, the preamble of our constitution declares Nepal a sovereign state committed to protecting and promoting the constitutional ethos.

Besides, the charter hosts a plethora of provisions to drive the state to achieve the desired goals of social welfare. It enshrines a bundle of fundamental rights that guarantees every citizen the right to a dignified life.

From non-deprivation of right to equality and right to lead a dignified life, right to life and liberty has been fundamentally transformed by the magical wand of progressive fundamental rights. Rights of citizens form part of and pervade the constitution.

The progressive provisions like right to clean and healthy environment, right to housing, or employment or right to inclusive proportional representation for mainstreaming the weaker sections of society or one-third representation of women in political spectrum are the good deal of arrangements to foster constitutional morality and cast responsibility on an individual to be faithful towards constitutional values and uphold them with utmost integrity, without any compromise. These provisions make our constitution an organic living document.

This is something we need to remember as we celebrate the constitution day this year (which falls on Asoj 3 (September 19).

While adopting best international practices and robust fundamental rights regime, Nepal’s national charter strikes new paths, new approaches and patterns in several directions. It makes a bold departure in many respects from established constitutional norms and devises a fair corpus of provisions for nurturing cooperative federalism. For instance, in the area of crisis management and vulnerability reduction, the fundamental document assigns responsibility on all tiers of government to control and abate the disaster risks. In this respect, disaster risk management is a shared responsibility of all three spheres of the government—federal, provincial and local. This is at least much more progressive than the constitutional provision of India where the federal government (by virtue of residuary powers) has a complete say in matters relating to crisis preparedness and disaster management. Although India is more prone to disaster and pandemics, disaster management law does not figure in the scheme of constitution. In this way, crisis management is entirely a central issue in India. The same is not true in our case. Our constitution aims to unite every institution and section of society in a bond of trust to respond to the pandemic. It aims to achieve twin objectives of promoting cooperative federalism in the time of urgencies and reducing rigidity at federal level.

We only have to repeal Infectious Disease Act (1964), which has become outdated now, and need to replace it with a new federal law.

Thus it would be just to argue that our constitution, by and large, seeks to promote federal principles, social welfare and rule of law. It stands as the first national constitutional charter in South Asia to include explicit mandate of one-third representation of women in legislative apparatus. Also, it’s the foremost fundamental document in Asia—and only the third in world along with South Africa and Ecuador—to expressly guarantee the rights of transgender people. The provision of right to equality clearly states that no discrimination shall be made along the lines of sex, or sexual orientation as well. Also, it has been provisioned that citizen with disability and economically poor conditions shall have the right to free higher education. These constitutional moralities make our constitution one of the most progressive documents in the world.

The constitution safeguards federalism and sovereignty. It unites citizens in an enduring sense of duty to uphold the constitutional norms. This is one of the crucial things every Nepali should understand while cherishing the Constitution Day.

Nepal’s anti-constitution brigade will go on blaming the constitution for infinity, for all ills facing the country. But if there has been any lesson to learn in nearly three years of exercise of federalism in Nepal, it has been this: Nearly all the leaders—from the local to provincial to federal levels—have eyes on state money. They want to use it, misuse it and misappropriate it for the sake of serving their personal or party interests.   They seem to be thinking all the time how to fleece the people, how to make money for themselves and their relatives, in other words, how to destroy this country.

There is no need to be disappointed with a handful number of conflicting provisions and imperfections. And we must not be swayed by the narrative of the campaigners who first launched protests against the constitution, imposed, or supported, the embargo in collusion with foreign power against their own motherland, and in return, who have secured vital public offices in the federal set up or are bargaining for power and money—the sacrifice of over 100 martyrs be damned.

Fellow Madheshis, think of all those who asked you to jump into the protest, who promised you bounties of millions of rupees if you were killed, or who said they would keep fighting for employment and development of Madhesh. These popular figures are holding the top public posts today, embezzling the money allocated for the development of Madhesh.

It now seems like all the deaths and destructions and hate against Nepal and Nepalis was only for the opportunists to rise to power. We in Madhesh have a lot to reflect. People in the hill have a lot to think how their fate and the fate of Madheshis are tied together.

We, “the people of Nepal,” need to rise as one people and realise that it’s our solemn duty to defend the constitution, while at the same time also raising the voice to correct the shortcomings there are. The need of the hour is to consolidate the democratic credentials, instil constitutional morality and frustrate anti-constitutional practices.

The author, formerly a lecturer of Law at Kathmandu University School of Law, is Judicial Officer with Birgunj High Court

Home Minister Bal Krishna Khand has said that the government presented the Citizenship Bill in parliament as per the spirit... Read More...

Intraparty Democracy at Stake in Nepal

This escalating ideological crisis within the political parties, lack of vision and clear action plan, disregard to the democratic norms... Read More...