Sorry tale of young Chepang moms who have babies every year 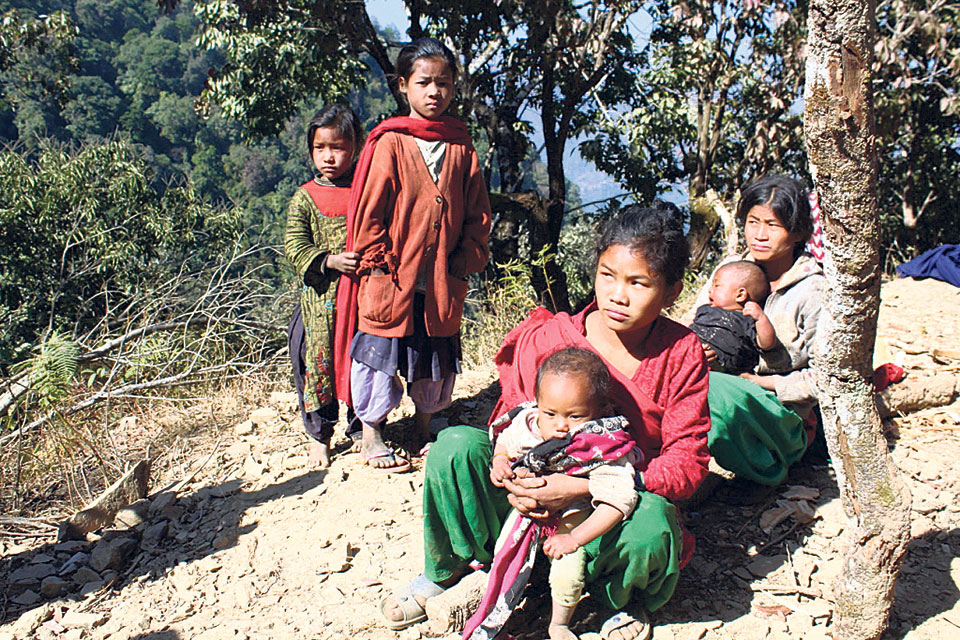 DHADING, Jan 26: Samjhana Chepang is just 20. This local girl of Brushbang area of Benighat Rorang Rural Municipality in Dhading already has three kids. Her first child - a daughter - was born when she was 17. The following year, she delivered a baby boy and again she gave birth to a girl who is just seven months old now.

Samjhana had eloped with Mangalsen Chepang at the age of 16. Having three kids one after another right after marriage is nothing new in this community.

“This is what happens here, with everyone. Other girls of my age also have kids,” says Samjhana. “We collect food from the jungle. Sometimes, we have nothing to eat. During such times, it is very hard to calm the babies,” she added.

Food has always been a matter of constant struggle for the Chepangs. In the past, jungles were dense and their habitat was more resourceful. Over the years, food collection from the jungles has been a challenge due to haphazard urbanization.

According to the couple, crops they grow in the fields last for around three months and they have to depend on the jungles for the rest of the year.
“I go to pick Yarsa in its season. Sometimes, we even work for wage,” said Mangalsen, whose is the same as his wife's. “But that is rare. We are not educated people and our opportunities are limited,” he added.

On one hand, the living standard of this community has not improved while on the other hand the practice of early marriage and motherhood is still prevalent. Normally, they do not arrange marriages. Girls simply elope with someone they like.

“I eloped with him. All girls do the same. They elope with their lovers,” Samjhana says rather shyly.

And when the 'lovers' finally settle down, real problem begins to surface in their life. Basically, girls suffer in terms of health. They get pregnant and deliver babies just from the year of marriage. Giving birth to baby every year is normal for almost all Chepang girls.

“This is quite natural for us,” says Samjhana, sounding very causal.

Her lower abdomen and backbone ache. She feels dizzy and fragile most of the time. Lack of food and care has taken toll on her health. Children are not healthy either. The young mother has least knowledge about health tips. She has simply no idea about the need to go to health post during pregnancy and post-delivery, she said.

“All my three children were born at home. I could breastfeed them till they were six months old. Then they were fed sisnu (nettle leaves),” she said.

One of the reasons why Chepangs do no visit health post is also because the posts are not nearby.

Ishwori Maya Chepang, Shamjhana's neighbor, laments the remoteness of their village. It takes nine hours of walk for here to reach the highway, she said.

“We cannot go far away from here. Our life is never going to change,” she said. “Even new-born baby does not get any care as we all are very poor,” Ishwori Maya added.

According to her, there isn't any woman from the Chepang community who has delivered a baby in health post. Neither do the babies ever get vaccinated, nor do they get medicine.
“We never go to health posts. All our babies are born at home, nothing has really changed for us,” she said.
Health complications are rampant among those women. As they do not use any contraceptives, conception and delivery of babies have resulted in health complications. Many Chepang girls even experience miscarriage. This further affects their health.
“Some women die during delivery process. If not, they generally have more than six children while they reach middle age,” Ishwori Maya narrated.

Thuli Kanchhi is one of such women. She is 38. She has six daughters and a son. According to her, it is important to have one baby after another because 'many of them die'. “All do not survive as they grow up. So, we need to give birth to many babies,” she defended. “We must accept whatever god gives us,” she added.

While she was saying so, just behind her was standing 20-year-old Ful Maya. She has two kids. She had married at the age of 14. “Some of my kids did not survive,” she informed.
Finding robust, healthy Chepang women in the village is a difficult job. Children are equally malnourished.

As per the 2011 census, the number of Chepangs across the country is 68,699. Among those, around 18,000 are in Dhading. Even though the lawful age of marriage in Nepal is 20 for both men and women, Chepang girls and boys are found to tie the knot as early as at the age of 13.

I was taken aback when during a recent conversation she casually mentioned how unsafe America had become to travel. ... Read More...