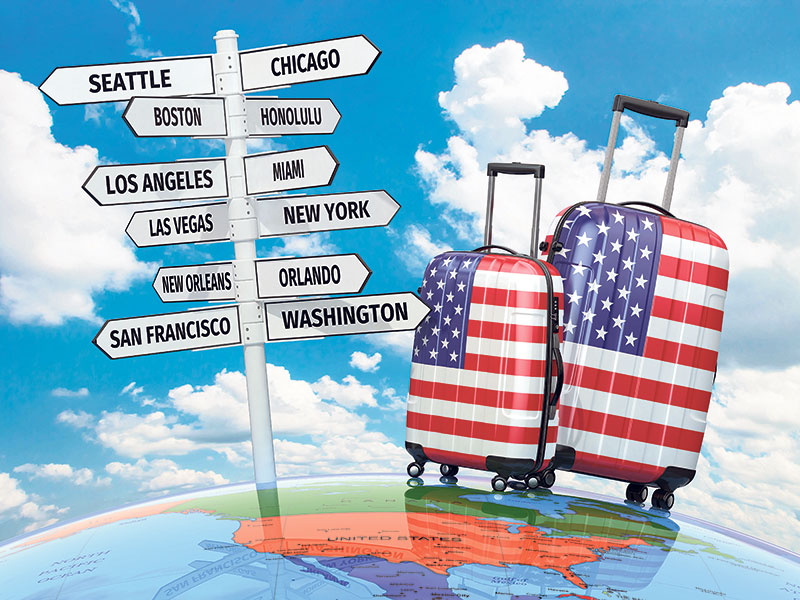 I was taken aback when during a recent conversation she casually mentioned how unsafe America had become to travel.

With my sister permanently settled in the US, my mom goes to visit her at her Ohio home every once a while. Together, they have now travelled through the length and breadth of America: from New York to San Diego, from Columbus to Dallas. Mom is now confident she can travel in America all by herself, without her daughter in perpetual tow. It would, in fact, not be a stretch to call the ‘land of the free’ her second home. She fondly looks foI was taken aback when during a recent conversation she casually mentioned how unsafe America had become to travel. rward to spending time with her two grandchildren back in the US during her rather lonely days back in Nepal.

So I was taken aback when during a recent conversation she casually mentioned how unsafe America had become to travel. One should be careful these days, as “all you get to read in the news is how someone or the other is getting shot in America.” Coming from my mother, who has next to no interests in US politics, it was a measure of how the global perception of America is gradually changing due to the recent spate of gun-related violence, the growing divisions between the blacks and whites and the stellar rise of a nativist xenophobe as one of the two main contenders for the White House.

The country of nearly 320 million people has nearly as many guns. Every day, 30 people are shot and killed in the mainland US; half of them are between 18 and 35. Compared to an average Indian, someone living in the US is 38 times more likely to be killed by a gun. With a poisoned political climate, the ascendency of ethnic politics and vehement resistance to even minimal gun oversight, things are likely to get worse before they improve in America. No wonder my mom is getting the jitters.

The Americans, coincidentally, have made it a lot easier for Nepalis to obtain student and travel visas. One of my cousins who runs a consultancy that handles the paperwork of would-be Nepali migrants to various western countries says that while before only a tenth of the people who sought his services to go to the US were given a visa, these days more than half of his applicants were getting travel permits. The American embassy has also significantly cut down on number of documents that need to be presented during the visa interview.

It is not clear why the Americans have decided to relax their visa rules. Perhaps they are well aware of the rapid erosion of the US soft power as a result of the recent race riots and increasing gun-related deaths. Perhaps it’s a part of their ‘pivot’ to Asia and the Indian subcontinent in particular. Perhaps it’s a case of more immigrants bringing more money to spend in the US.

Whatever the case, in the coming days, and especially with the rise of one Donald John Trump, the US could have a big image problem abroad. The American authorities will increasingly struggle to convince skeptics like my mom that their country is completely safe. For even if Trump loses the November election, he has shown other would-be Republican aspirants for the White House how it pays to stir people’s basest instincts, to accentuate the difference between the ‘real Americans’ and the ‘scroungers’ on American soil, and to try to somehow paint immigration, legal or otherwise, as the root of all evil in America.

Up until now America continues to be among the dream destinations for Nepalis students. According to the United States Education Foundation (USEF)-Nepal, of the more than 670,000 foreign students in the US right now, over 11,500 are Nepalis. Last year alone, over 3,600 Nepali students obtained the ‘No Objection’ letters from the Ministry of Education to go study in the US.

Many of these students stay back in America after getting their degrees. They then invite their immediate family back in Nepal to come and stay with them. Though there has been no systematic study on the number of ethnic Nepalis in the US—staying there as students, as winners of DV lottery or as American citizens—unofficial estimates put the number at anywhere between 300,000 to 500,000.

But with the never-ending stream of reports of violence emerging from the US, the parents who are thinking of sending their children there can no longer be assured about the safety of their wards—or even about their own safety while travelling there.

I personally am a great fan of the liberal values championed by America’s founding fathers, of its world-class academic institutions, its traditional warmth for immigrants of all backgrounds and regions, and its vibrant media landscape. In fact, modern-day America has a lot going for it, making it still the only superpower in the post-Cold War world. Not a bad tourist destination either.

But perhaps I and my mom won’t be the only ones factoring in the growing violence in America the next time we apply for a visa to the Trump-land.I was taken aback when during a recent conversation she casually mentioned how unsafe America had become to travel.

Sorry tale of young Chepang moms who have babies every year

Food has always been a matter of constant struggle for the Chepangs. In the past, jungles were dense and their... Read More...

8 essential tips for people who love travelling in monsoons

Travelling during monsoons is fun (especially treading through the lush, green hills or paths in misty climate) but it can... Read More...

Together, they were successful in coordinating their moves, and impersonating trees and buses, which is not something one can do... Read More...