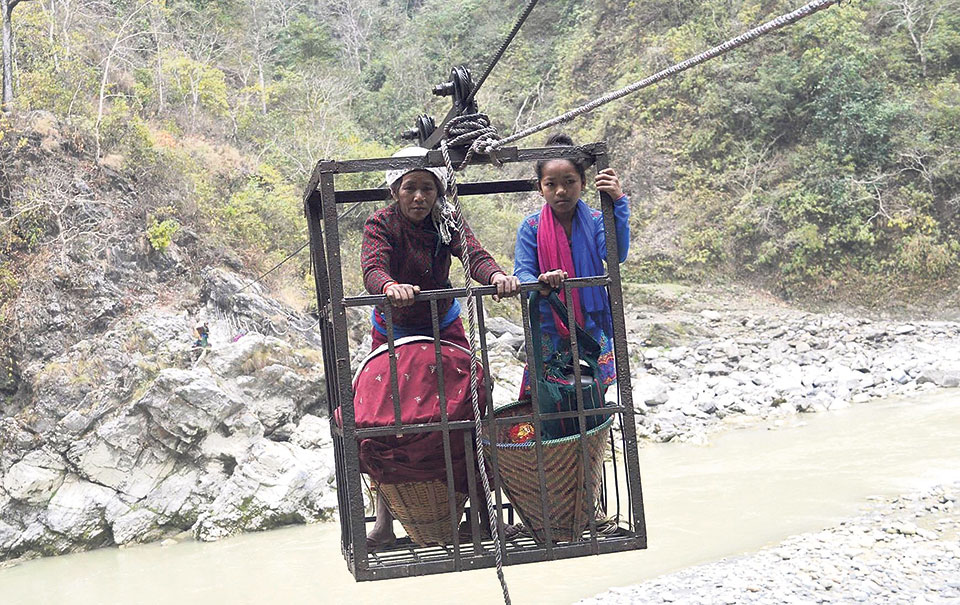 A large number of locals of Rishing and Devghat Rural Municipalities still use tuins to cross the river. The district's four of the seven tuins have been replaced with suspension bridges.

A large number of locals of Rishing and Devghat Rural Municipalities still use tuins to cross the river. The district's four of the seven tuins have been replaced with suspension bridges.

As pulling the rope of the pulley alone is an arduous task, Tikamaya along with her neighbors Krishnamaya, Kulimaya and Sommaya Ale visit Damauli together. "We often visit Damauli in group as it is easier for us to pull the rope together," said Krishnamaya, adding, "The fear of falling into the river keeps haunting us until we get across the river."

As many as 150 families of Setang raise money on yearly basis for repairing the tuin. According to Kulimaya, money is collected on the basis of the income of the family. The locals of Tallo Setang, Bhalbon and Banjha of Rishing Rural Municipality-1 rely on the tuin. They have time and again urged the government to replace it with a suspension bridge.

Similarly, the locals of Khahare and Saranghat still use another tuin to connect to other places. The District Coordination Committee, Tanahun said it is planning to replace both the tuins with suspension bridges. Sub engineer Suresh Adhikari informed that a bridge is to be constructed in Khahare at the cost of Rs 7 million and a similar bridge will be built at Saranghat at the cost of Rs 9 million, according to Adhikari. "These bridges will be constructed within July," claimed Adhikari.

TANAHUN, May 8: Approximately 84 households of two villages, Byas Municipality-14 and Bandipur Rural Municipality-6, are forced to live in... Read More...

With the years, the way we enjoy our travels tends to change. Prabesh Poudel says he has noticed that too.... Read More...

Nepalgunj airport to be developed as hub airport: Minister Bhattarai
7 hours ago