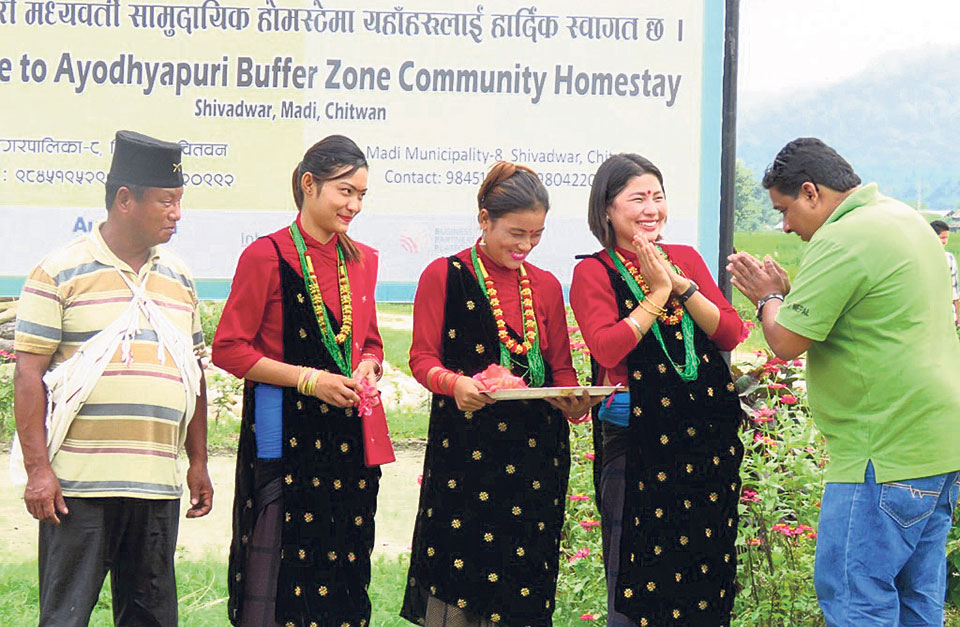 Representatives of a homestay service in Shivadwar, Madi Municipality, Chitwan welcome a guest in this file photo. Photo: Sabita Shrestha/Republica

CHITWAN, Jan 17: A lot of villages in Madi district are still deprived of electricity. However, not all of them live in dark. Thanks to solar light installed in dozens of these villages, people’s life, and work have been made very much easier. Because of it some of the houses have also been able to operate home-stay services.

“Homestay has a lot to do with our economy here. Many households are providing this service,” said Mohan Bahadur Pun Magar, chairperson of Homestay Operation Committee, Madi. “But this would not be possible if we didn’t have solar lights. Solar power has done wonders here.”

According to Magar, in the last three years, over 10,000 tourists enjoyed Madi’s homestay service. At Shivadwar of Madi Municipality - 8, every family of the Magar community has allocated two rooms for homestay and all of them are powered by solar energy.

“In Shivadwar, you will hardly find any family which has not been operating homestay service. It has become a major income source for the Magar community,” he said.

Magar population is dominating in Shivdwar. Their original culture, cuisines and the mesmerizing location where their settlement is, easily attract tourists.

“It is not a small thing for us that we received so many tourists in a short time. Promoting the facility is sure to bring even more tourists,” said Magar.

When the community started the service, it had its own fears. Since they lived near jungles, they thought that guests would not feel safe and secure living in their homes. “That was why we were quite nervous. We had lengthy discussions among ourselves over the initiative’s results,” Magar said.

The preparation to start the service was costly. Tourists would definitely demand quality service though they would not compromise with originality in terms of culture, food, and lifestyle of the locals.

“So, it was tough for us to decide whether we should invest or not. If you are bringing home guests, you need to have at least a minimum level of arrangements. And on top of all the things, we had power problems,” Magar explained.

It has been just eight months the villages were connected to power. But homestay service in here is already booming. “The reason is, we relied on solar power when we didn’t have access to electricity.”

Madi these days receives both domestic and international tourists. And the number is growing every day. And because of the lights, locals do not have to worry about power shortages.

“We are presently connected to power grids. But I don’t think it would be sufficient in absence of solar power. In rural zones, solar lights are actually better options,” Magar stated.

Thil Bahadur Pun Magar, a homestay operator who has been earning ‘pretty good money’ through homestay service, agreed. Had it not been for this business, he would ‘have to fly overseas for employment long ago.’

“Power is mandatory if you want to run a business like a homestay. And in a country like Nepal, this business can actually boom in rural areas than in towns. But we don’t have power everywhere. Amid this, I would say that local governments should take initiatives to promote alternative energy and offer respite to locals,” said Thil Bahadur.

Along with solar power, Magar said that biogas is another asset that Madi locals are using. People have gotten rid of the smoky oven by replacing it with biogas in the last few years.

“This biogas and solar power have changed people’s life. If the government gives more subsidies on such programs, power won’t be a big issue even in remote areas,” said Magar. “Not just us humans, our cattle also rely on solar power here.”

Most of the families in Madi are dependent on agriculture. Some of them are operating irrigation facilities too through solar power. “And this has greatly helped increase our crop productions,” Magar said.

Though homestay service, a family makes Rs 30,000 monthly on an average, according to Magar. “We don’t have to spend much on buying food grains as we are also involved in farming. Living in villages is not expensive as it is in cities and towns. So much of what we earn through homestay is saved,” he said.