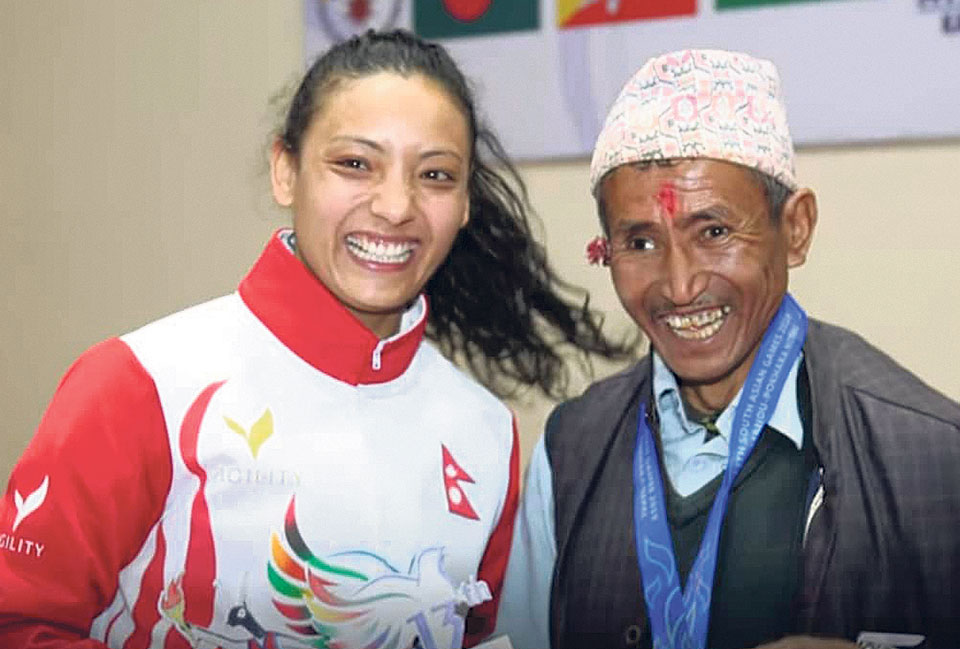 Joy of gold medalists momentary amid poor economic prospects
KATHMANDU, Dec 5: The glittering lights and huge fanfare at Dasharath Stadium during the opening of the 13th South Asian Games on Sunday captivated many, including Sunita Maharjan, 26, but only for some time.

On Tuesday she won a gold medal for Nepal, defeating Pakistan’s Wolsoom in Senior Women’s Karate under 68 kg Kumite. And the joy of victory also remained only for some time. “I felt on cloud nine, and no wonder. But at the same time I knew that daily reality was fairly grim. The thrill of a win is just momentary for people like us,” she told Republica.

Maharjan, who is a police constable outside the sports arena, has seen hard times. Her mother, ‘a naïve housewife’ and her father, a peasant who also worked as a gardener, would make her feel very humble and dreaming of changing their lot some day. “As a child I would work in the fields with them. I have seen them work very hard. I always wished to see them live a better life,” she said. They would try to hide their struggles from their children to keep them happy. “I just wanted to see them better off and feeling great.”

But today, she feels that her dream is not getting anywhere. As a police constable she earns a meager salary. And her passion for karate, which got her into sports, ‘is simply not going to open any great opportunities ahead’.

“Today we played and won, tomorrow we’ll be forgotten,” she said.

According to Maharjan, who got married two years ago, until and unless there is a good future for sports persons and steps are taken to that end, taking pride in sporadic victories in the field will make little sense.

Bir Bahadur Mahara, who is from the far west, feels the same way. He says his elation over the gold medal he won after defeating Pakistani Mohammad Fahim in taekwondo is not going to last for long. Back home in Kanchanpur, his parents struggle to make ends meet. His brother is away in India, working.

At school, he used to take up sports, especially taekwondo. “Fate made him a policeman, and playing for the nation”. He even won a gold medal. But he does not feel assured of the honor that he feels is his due. “It’s great to make the country proud. Everyone shares your happiness when we defeat someone from another country. But after the victory celebrations, nobody thinks anymore about those who won it,” he said.

The potential of sports persons is killed off in mid-career for lack of encouragement. In case of injuries and likely financial contingencies, the state does not show any largesse. Mahara has seen many such instances. And that makes him lose heart. “To win gold you need to put up with punches to your nose, your face,” he said jokingly. “I can take punches, but in case of severe injury, there is no support from the state. You may spend your entire life punching for your country, but there is no guarantee of a comfortable old age,” he added.

According to Bishnu Katuwal, a head constable in the police who plays badminton and won a bronze this SAG, playing for the country is a great opportunity. But it comes with a huge cost. He finds badminton an expensive game, with its rackets and shuttlecocks and diet and dress to match. “If you want to practice all out you need to have at least the minimum things. You can’t afford it,” he said. “I don’t think our country is so poor it has to leave us feeling this way. Greater budget allocation for sports and proper management could bring a real smile to the face of sports persons and that of the nation,” he remarked.

This fiscal year, Rs 1.96 billion was allocated for sports. Earlier, it was Rs 2.4 billion. This is a negligible sliver of the total national budget.