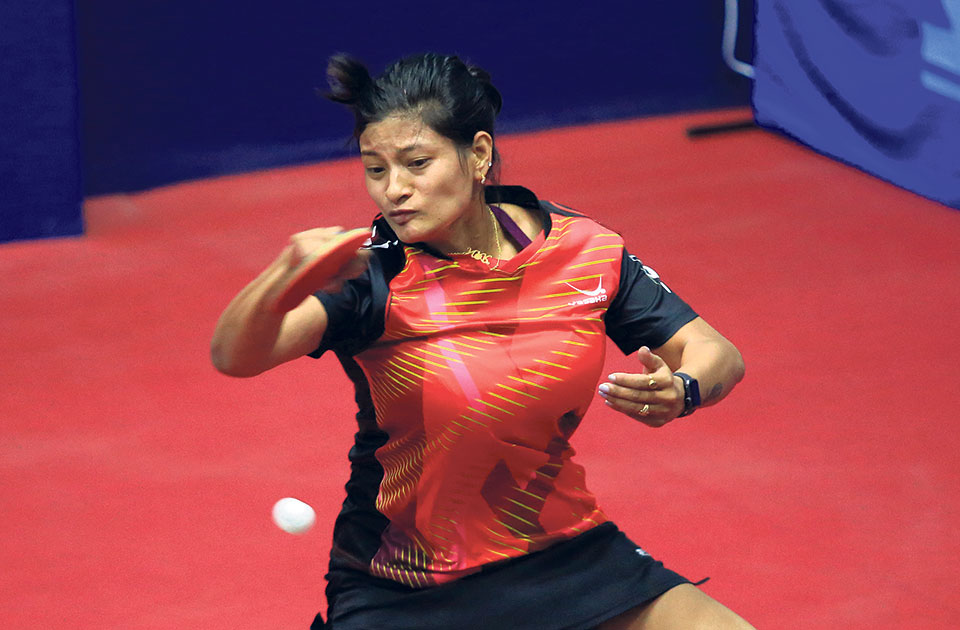 KATHMANDU, Dec 3: Both men and women Nepali teams have advanced into the semifinals of lawn tennis at the 13th South Asian Games (SAG) in Satdobato on Monday.

In the quarterfinal match of women’s team event at the Lawn Tennis Court, Nepal defeated Bangladesh in straight sets of 3-0 to reach the semifinals.

Likewise, in men’s singles, Nepal’s Pranab Khanal saw off Mohammed Almagir in straight sets of 6-0, 6-1, while Samrakshyak Bajracharya reached the semifinals as Shree Amol Ray got injured after the game was tied on 1-1 with the score of 2-6 in the first set and 6-2 in the second.

In men’s doubles, the pair of Nepal’s Nabin Paija and Pradeep Khadka won on straight sets 3-0 to reach the last four. Nepal will face India, who reached the semifinals after getting a bye.

In men’s doubles, the pair of Bhutan’s Nidrup Gyachhen and Pema Norbu overcame Mansoor 4-6, 6-4, 4-6 (3). Bhutan will now take on Pakistan in the semifinals.

In men’s doubles, Muhammad Abid and Mujamil Murtaza sent Pakistan into the last four with wins over Suren Balachandran and Nilabira Chaturya Danidu 6-3, 6-3.

Table Tennis
Nepal has registered a win in the first match of the men’s team event in table tennis on Sunday.

At the Table Tennis Hall in Lainchaur, Nepal beat Sri Lanka 3-1 to claim its first win of the competition and now will take on the Maldives on Tuesday in the second match.  The Nepali team consisted of Santoo Shrestha, Purushottam Bajracharya and Shiv Sundar Gothe.

In the other match played on the same day, India registered wins against Pakistan and Bangladesh. India won both the games on straight sets of 3-0. With the wins, India has already advanced into the semifinals.

In its first match played earlier on the day, Sri Lanka easily saw off the Maldives 3-0.

In women’s team event, Nepal faced a 3-0 loss against Sri Lanka and now will have to beat Bangladesh on Tuesday to have any chance of going through to the semis.

In the other matches, India beat both the Maldives and Pakistan on straight sets of 3-0, while Sri Lanka overcame Bangladesh 3-1. India has reached the last four in the category as well.

32 tourists rescued from Manaslu
5 hours ago

14 days' isolation required even after discharge from hospital: Chinese doctors
3 hours ago

Defying lockdown, people flock to streets, shops in Bhaktapur (with photos)
5 hours ago

NA plane returns from China with medical equipment
8 hours ago