Nepal is hosting the event after 20 years. The last time the regional Games was held in Nepal was in 1999.

President Bidya Devi Bhandari will inaugurate the mega sporting event, which has returned home after 20 years, amid a special function at the Dasharath Stadium.

The last time the regional Games was held in Nepal was 1999. The SAG, also known as the Olympics of the south Asian countries had come to existence from Nepal in 1984, where only five sports viz football, boxing, athletics, weightlifting and swimming were included. Nepal had won four gold medals (two in boxing, one in football and one in athletics), 12 silvers and eight bronze to finish fourth.

In 1999, the SAG returned home for the second time as the eighth edition where Nepal won record 31 gold medals, 10 silvers and 24 bronzes in 12 sports disciplines to finish second in medal tally.

The regional games is finally starting at home today defying hundreds of challenges primarily the infrastructure delay which saw the multi-sports even postponed for two times this year.

National Sports Council (NSC) in a press release on Sunday said the preparation for the Games has been completed.

“It gives us immense pleasure that the Government of Nepal, Youth and Sports Ministry along with the NSC has completed all the preparations to host the 13th SAG in Nepal from December 1-10,” the sports governing body stated.

“Nepal, as a nation, is proud to welcome all the delegates and athletes from all the participating countries. We are very certain that the Games will bind all the citizens of the SAARC nations with one single reason, which is sports.”

About 5,000 delegates and athletes for the seven SAARC member countries will participate in over 28 sports disciplines (including beach volleyball and 3×3 basketball) for, which will be held in 29 sports venues in three cities. They will be competing for 324 golds, 324 silvers and 487 bronzes.

This is also the first time the country is hosting the Games across three cities: Kathmandu, Pokhara and Janakpur.

Pokhara will host women’s football and cricket, archery, badminton, handball, triathlon, beach volleyball and weightlifting while Janakpur will host wrestling. The rest of the events will be held in Kathmandu.

Although the Games is officially starting today, the volleyball started from Wednesday.

“Presentations representing Nepali arts, culture and identity will be performed in the opening ceremony,” Thapa said.

He added that the opening ceremony will start with the lighting of Olympic torch, oath taking and welcome speech from special guest and the official inauguration of President Bhandari.

According to the event committee, 4,500 Armed Police Force personnel, 1,500 Nepal Army personnel, 1,300 Nepal police, 3,000 students and 4,300 professional Jhaki artists will perform at the stadium. Artists Ananda Karki, Kunti Moktan, Indira Joshi and Satya Raj Acharya will sing the SAARC song during the inauguration. The song is composed by Mukunda Sharma while Prakash Gurung has given the music.

“We have decided to select Adhikari as the national flag bearer based on his sports experience, international medals and his participation in the Olympics,” said the NOC in a press release on Saturday. 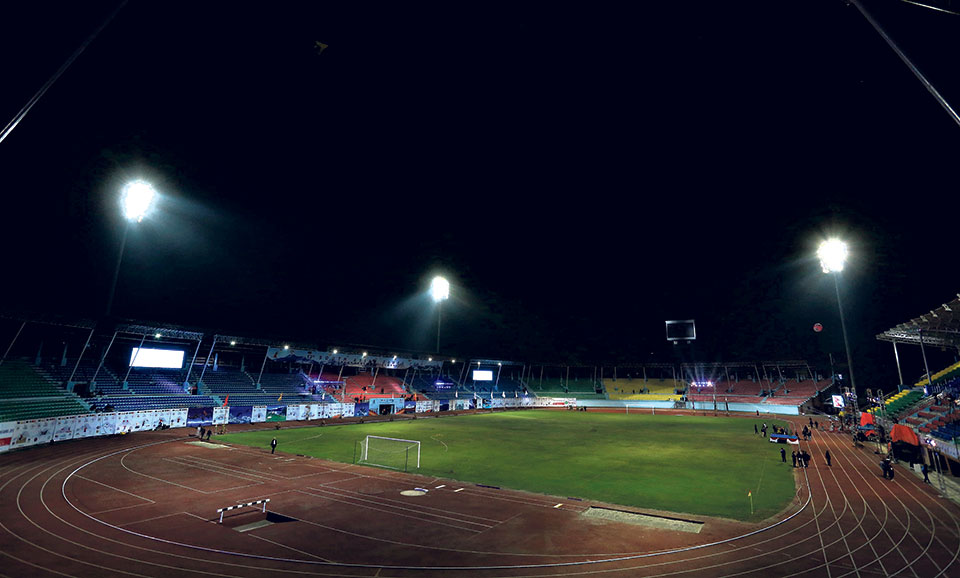 A night view of the Dasharath Stadium on the eve of the opening ceremony of the 13th South Asian Games. Photo: Dipesh Shrestha/Republica

KATHMANDU, Dec 5: The glittering lights and huge fanfare at Dasharath Stadium during the opening of the 13th South Asian... Read More...

Availability of animal carcasses attracting vultures to Tanahun
51 minutes ago