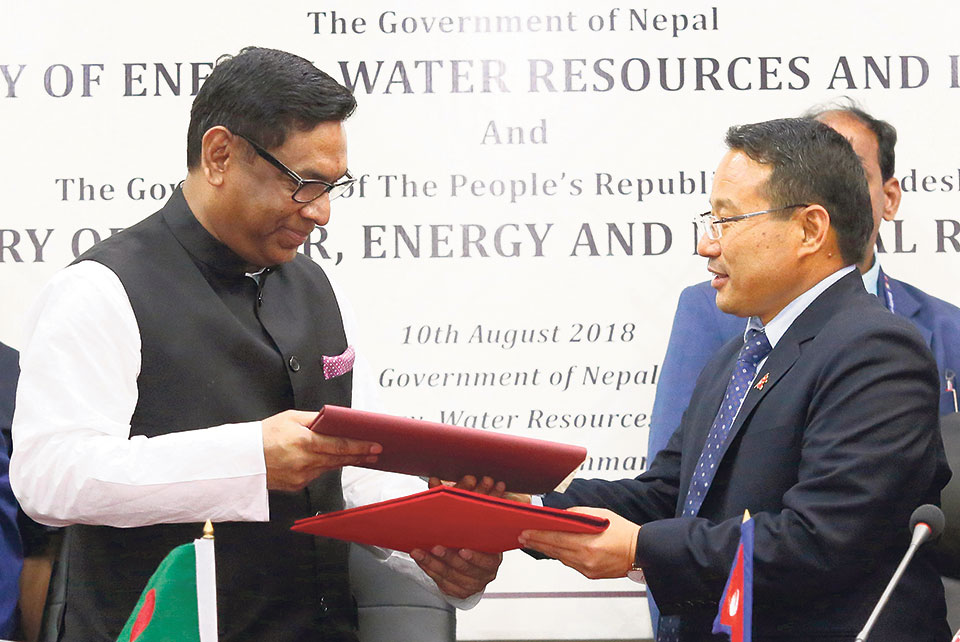 ‘Physical connectivity and commercial modality must for energy trade’

KATHMANDU, Aug 11: Nepal and Bangladesh inked a bilateral agreement on cooperation in electricity development, in Kathmandu Friday. This paves the way for opening the market in Bangladesh for Nepal’s hydroelectricity as well as bringing in Bangladeshi investment in this sector. Bangladesh, for its part, will meet its energy needs in the face of depleting natural gas, for sustaining its high rate of economic growth.

Under the bilateral agreement, both countries will work on electricity generation, energy efficiency, renewable energy and on building grid connectivity, according to a press statement issued by the Ministry of Energy, Water Resources and Irrigation. The agreement was signed by Minister Barshaman Pun and Bangladesh State Minister for Power, Energy and Mineral Resources Nasrul Hamid.

Under the agreement, entrepreneurs of both countries are to be encouraged to invest in electricity and harness the hydro potential of the region through bilateral, regional and sub-regional cooperation.

To implement the cooperation, two bilateral mechanisms will function jointly. A Joint Taskforce co-chaired by the joint secretaries of each ministry will coordinate matters. A Joint Director Committee will review the progress made by the taskforce. Both the mechanisms will meet every year in Dhaka and Kathmandu  by turns.

This agreement is viewed as a further development in energy cooperation among SAARC countries as envisioned by the SAARC Energy Framework signed in 2014.

Addressing an interaction on energy cooperation organized in Kathmandu on Friday evening, Minister Pun said, “The cooperation we have entered into will not only serve as an important platform to strengthen our cooperation in power sector but also as a stepping stone in our continuous effort in realizing the aspiration to achieve energy security through regional/sub regional cooperation.”

Bangladesh Minister Nasrul said that they wanted to import Nepal’s electricity for using more renewables. Both  countries have also spoken of initiatives for trilateral energy cooperation with India .

Bangladesh has announced a policy of  10 percent renewable energy  in its grid by 2021 from the current 3 percent. As its natural gas, which contributes about half  its total energy supply, is depleting, Bangladesh has started  installations of coal fired power plants .

Meanwhile, experts say that if the cooperation is to materialize,  grid connectivity as well as financial modality are key. “Bangladesh is desperately looking for energy to sustain its economic growth but supplying Nepal’s electricity to Bangladesh requires both physical grid connectivity and also financial modality for commercial terms of trading,” said Bishal Thapa, managing director of Saral Urja Nepal, an energy service company that is into renewables.

Bangladesh has to produce 40,000 MW of electricity by 2030 and 60,000 MW by 2041 to become a middle-income country, according to statistics of the Bangladesh government. According to a media report, if Bangladesh is to increase its GDP by 1 percent it will have to increase electricity generation by 1.5 percent.

Currently, 80 percent of Bangladesh’s 160 million people have access to electricity—up from 47 percent in 2009.

KATHMANDU, July 10: The Federation of Nepali National Transport Entrepreneurs on Friday put forth various preconditions for the resumption of... Read More...

KATHMANDU, July 10: The generation and supply of about 500 megawatt of electricity has been hampered due to the incessant... Read More...

BHAIRAHAWA, July 10: The construction of Gautam Buddha International Airport has been affected as technicians and equipment required for the... Read More...