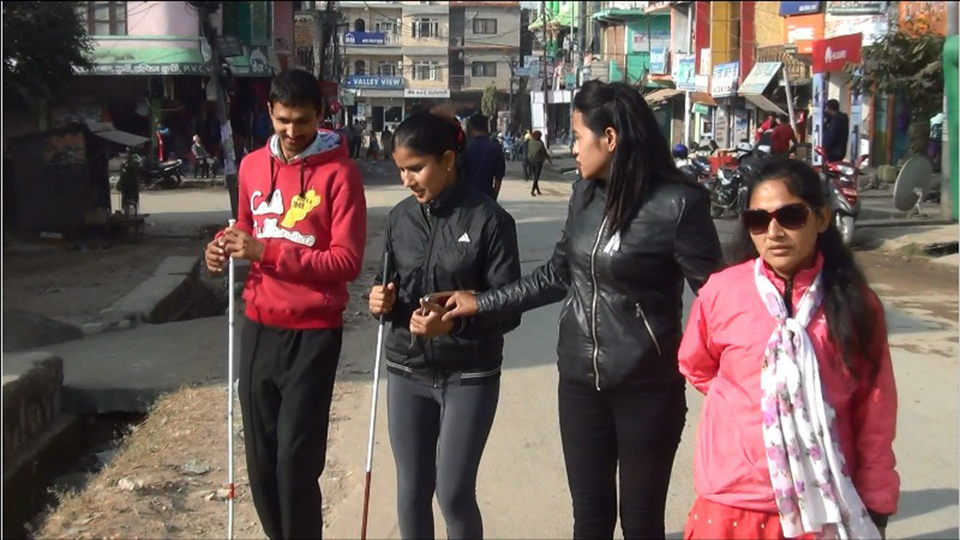 A group of visually-impaired voters on their way to polling station during the recently concluded local level elections in Surkhet. Nagendra Upadhaya /Republica

KATHMANDU, Dec 7: In the recently concluded local level elections, Laxman Subedi, chairperson of the Kaski Association of the Blind could not exercise his voting right the way he wanted.   He had reached the polling center along with his reliable friend but the election officers didn't allow his friend to accompany him to the booth.

Subedi says that many disabled people had to struggle a lot to cast their votes. "Though the infrastructures of some polling centers were easily accessible they still are not suitable for the visually impaired and deaf voters," he said. He opined that not even a voter's own family members could be trusted when it comes to voting because all family members do not necessarily have same political ideologies. "This is why disabled voters should be allowed to go with the person of their choice," he said.

Fanindra Poudel, advisor to Srijanshil Apanga Samaj, an organization working for the welfare of the disabled, claims that none of the polling centers in the rural parts of the district is disable-friendly. "Only the voting booths based in cities and market areas are accessible but the rest is extremely difficult especially for the disabled and elderly people," Poudel said.

According to the Women and Disabled Office, Kaski, as many as 3609 people had received disable identity cards by mid-July. Even though the disabled voters lament that they had to suffer a lot during voting, election officers claim that such voters were given special priority.

Lalu Sharma, an assistant election officer deployed at the polling center of Navajyoti Basic School, Mohariya of Lekhnath Municipality informed that voting booths are placed on the ground floor for the ease of disabled, elderly people, ill and pregnant women.

Similarly, in Surkhet too visually impaired are unhappy with the voting procedure even though they love to exercise their voting rights. They have urged for electronic voting facilities so that they can be confident that their votes are given to the candidate of their choice.

They claim that presently their votes do not remain confidential as friends, relatives or others accompany them to polling booths. Bhim Acharya of Birendranagar said that such voter's ballot paper is seen by the person who assists them in casting votes. He further added that despite that, such voters cannot be confident to say that their vote was casted to the candidate of their choice.

“In the local level election, I had voted. But, after returning from the booth, I did not feel that I actually voted. My nephew assisted me in voting and I am not sure if she gave my vote to the party I had told her to,” said Acharya. “Maybe the same thing will happen this time too. We cannot vote in the real sense unless there is electrical voting. The government should avail them for voters like us, at least,” he added.

Menaka Acharya of the same locality also shared similar concerns. She also feels that her vote does not remain confidential and is not confident to say that the person who assisted her to cast vote did actually vote for the candidate of her choice.

“It is a serious matter for us. We are citizen of this country like other people but when it comes to exercising crucial rights like the voting right, we have to compromise,” she lamented. “If we could vote secretly like others do, we would feel that we are equal citizen, too. Electronics voting system can help us in getting that right but it is regrettable that the government is not serious about it,” she added.

Yet another voter from the same area Samjhana Baduwal echoes the same thing. According to her, differently-abled people would definitely like to vote for the candidate who is sensitive towards everyone's issue including theirs. However, due to the dependency on others while voting, they are not sure if their vote went to the right candidate.

“Dependency on others for voting is very sad.  It makes us feel pathetic. But, there is no alternative unless the government provides us such facilities. There are types and severity of disability and the state must ensure that every voter get all the facilities required to exercise their voting rights properly,” Baduwal stressed.

According to a provision for the disabled people, any person who accompanies and assists a disabled person to cast votes is required to keep the vote confidential. In the event the confidentiality is breached, the person can face fine up to Rs 15,000. However, the provision remains barely implemented. As per the data of the District Blind Association, Surkhet, there are 1581 blind people in the district. Out of this, around 500 are on Thursday's election voter list.

Nagendra Upadhaya from Surkhet and Santosh Subedi from Pokhara contributed to this report.

KATHMANDU, Dec 3: With the completion of all logistical and administrative preparations, poll officers are heading toward their assigned election constituencies... Read More...