Food supplies for Dolpa remain stuck at Rasuwagadhi for a month 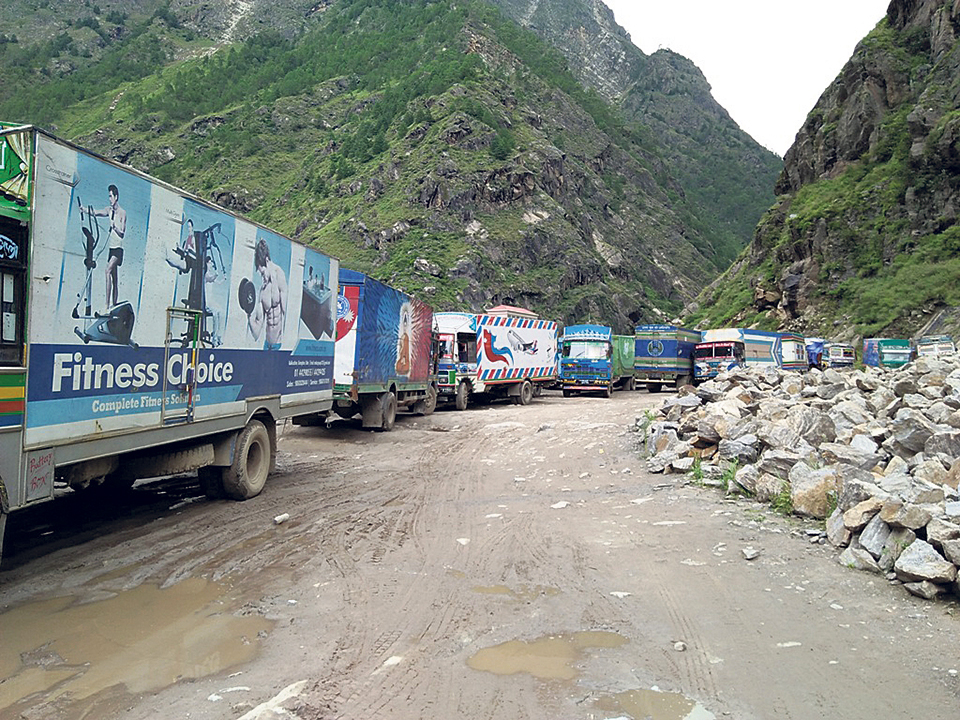 RASUWA, Sept 13: Food commodities meant for Dolpa district are stuck at Rasuwagadhi trade point in Rasuwa for the past one month.

As many as 80 containers carrying 4.5 tons of rice and 2.7 tons of iodized salt to Upper Dolpo region of Dolpa via Tibetan Autonomous Region of China are stuck at Nepal’s only trading point with China for the past one month.

Nepali containers are allowed till Kerung only. From there, the supplies have to be loaded into Chinese containers and then shipped to Dolpa. Ten containers in the convoy are carrying goods for schools and health posts and tools and equipment required for bridges, while five more are carrying diesel.

Vehicular traffic on the road to Kerung was affected for a month due to floods and landslides. Though the road has reopened now, the containers still remain stuck at Rasuwagadhi.

“Rice meant for locals of Dolpa is decaying in our containers. I don’t know when we will be allowed to enter Tibet,” Ram Sharan Deuja, a driver of one of the containers, told Republica. “We are allowed to drive till Kerung only. From there, Chinese containers will transport this shipment to Dolpa,” he added.

Deuja also said that 25-30 Chinese containers will be required for all the supplies.

The poor condition of the Rasuwagadhi road also affected supplies of good meant for the Teej festival to Kathmandu and other cities of the country. Traders say goods meant for Teej festival have remained stuck for over a month. Similarly, the under-construction Rasuwagadhi Hydropower Project also bore the brunt of the poor road. The project had to halt its works due to the shortage of diesel and other construction materials.

Supply disruption is also affecting revenue collection. Rasuwagadhi Customs Office is unlikely to meet its revenue target for the second month of Fiscal Year 2018/19, as movement of goods through the customs office remained affected for over a month, officials of the customs office say.

RASUWA, Jan 9: The Chinese side agreed to provide a 15-day temporary pass to Nepali drivers with valid passports to... Read More...

RASUWA, Dec 19: The number of people's representatives and governmental employees visiting Kerung has increased in the recent days. According... Read More...

RASUWA, Aug 19: Delay in repair of a flood-damaged bridge in Rasuwa has cut off the country’s linkage with China’s Tibet,... Read More...