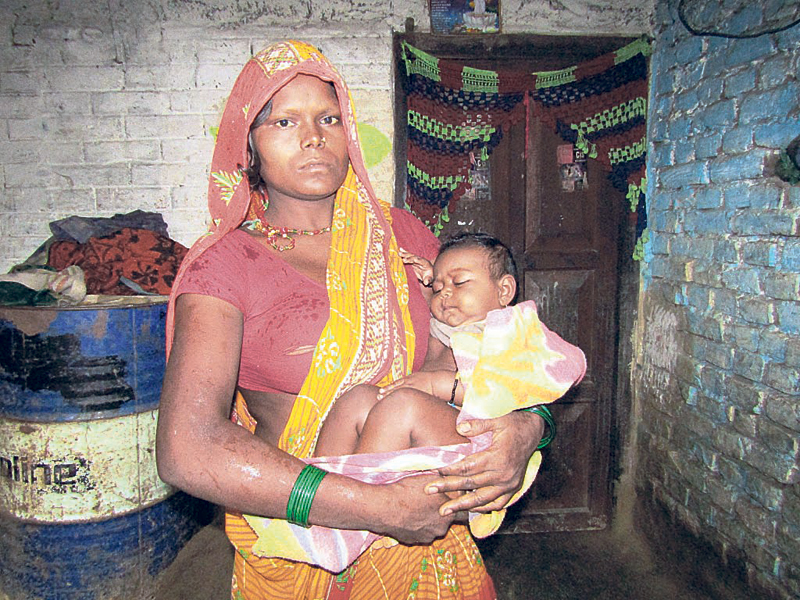 A flood hit woman from Rampura, Malhaniya - 6 with her son who, she said, has been suffering from high fever since the last three days and is yet to receive medical attention.

RAJBIRAJ, July 27: Life has turned miserable in around two dozens settlements across the district as growing number of people are rapidly falling ill to various diseases.

Considering the lack of access to even minimum health care, health workers have warned of epidemic outbreak across the district. Most of these settlements are drained with filthy floodwaters and with no measures taken towards draining it, locals are living in a very unhealthy environment that could further affect their health.

“Look at the situation, everyone is falling sick. Children, pregnant women and new mothers are the worst hit,” said Suresh Yadav, social mobilizer at Rampura, Malhaniya - 6. He added that around 100 flood victims are suffering from illness related to stomach, head and chest.

“Loose motion is a common problem here and there is no proper sanitation or drinking water facility. Compared to other wards, situation is worse in ward no 6, though number of patients in other wards of the VDC is also constantly rising,” he informed adding that of those ill in ward number 6 are 10 pregnant women.

One of these pregnant women Anardevi Khanga expressed worries about her and her unborn baby’s fate stating that her due date is just round the corner. “If under such circumstance I start to feel the labor pain, what will I do? I cannot reach out to the district hospital at the headquarters in this condition. And with my husband not around, I am scared,” she said. Her husband is a migrant, presently abroad.

Another pregnant woman from the same ward, Sampatiya Devi Khanga said that the flood hit areas are basically populated by economically backward people, like her family. She said that well of people do not choose to settle down in lands that are vulnerable to floods.

“It’s poor people like us who settle down in such land that are prone to floods and other natural disaster. And therefore we are the one that have been hit hard by nature’s fury,” she said adding that her family has been starving in lack of food. “We have no food to eat. Relief workers had provided one kg of beaten rice, but how long would that last?”

[Women and children from Malhaniya -6 at a nearby relief distribution center on Thursday.]

He said that the administration is using its optimum capacity to provide treatment to the affected. “Cases of viral fever, nausea, vomiting and loose motions have been found in the area. With the settlements still filled with contaminated water, it’s difficult to control spread of the disease. It would made instant difference in the situation if the flood could be drained out of settlement” he said.

Jha claimed that health workers have already been deployed in most sensitive areas. The administration is on high alert and trying to bring the situation in control. “We are aware of the possibility of epidemic outbreak in these settlements. We are making every effort to mitigate the risk,” he said. Jha stated that he has already circulated letter for distribution of medicines in the flood-hit zones. Similarly, he also claimed to have taken initiation to purify drinking water in the communities. “We have requested UNICEF for providing water purifiers in the affected areas,” he said.

However, residents in the settlements portrayed far grimmer picture of their condition than that narrated by the administration. They informed that corpse of cattle that died in the cattle, and contaminated water in the area has filled settlements with unbearable stench. They claimed that that the cattle corpses are rotting and getting mixed in the floodwater.

“With the corpses floating around and contamination of the water increasing by the day, epidemic outbreak in the area seems inevitable,” said Birendra Jha a local Tilathi - 6.

Four years ago, flood had claimed four in Tilathi - 4. “We had used pest control measures than to control the spread of disease,” said Jha who was the ward’s president than. “This time, problem is more intense this time as such disease control measures are still not implemented by local authorities,” he said.

Flood in the region has brought the custom office of Rajbiraj to a complete halt. Road networks and public services are badly affected. Meanwhile, Ranjit Jha said that locals have demanded better supply of electricity in the wards for safety at night from insects and snakes.

Three health workers have been sent to Gobargadha settlement to distribute medicine, according to the Public Health Office. Three hundred families are reported to have been stranded there due to flood in Saptakoshi. The action came following reports on the Gobargadha crisis.