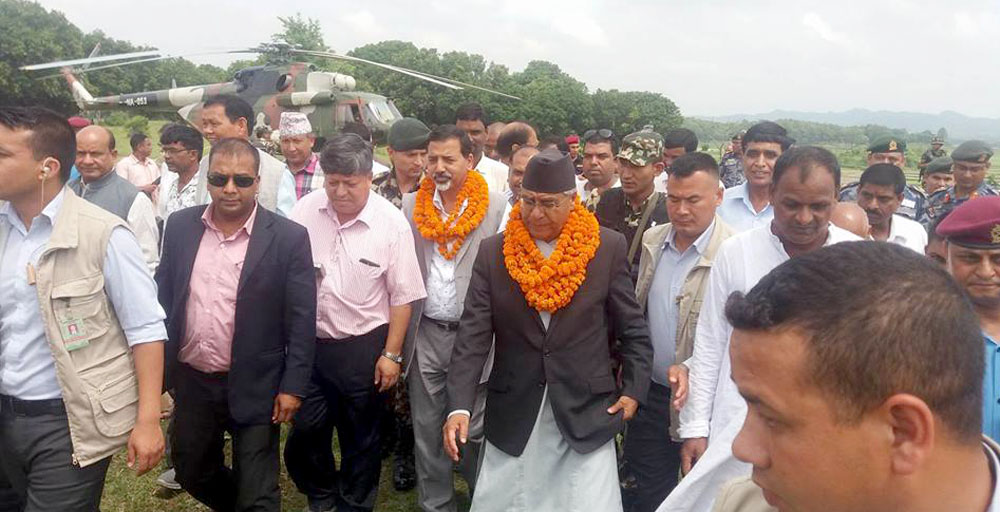 BHEDIYA, July 7: Prime Minister Sher Bahadur Deuba on Friday announced to provide Rs 25,000 to a family affected by flood in Saptari. He also promised to provide a maximum of Rs 1.5 million subsidized loan to reconstruct their homes destroyed in the natural disaster.

PM Deuba, who arrived here in flood-affected village on a chartered helicopter, also vowed to prioritize making embankments and taking a step forward in the reconstruction programs. PM had inspected the overflow of the Mahuli River in Tirahut Rural Municipality-3. He also observed the work of Nepal Army, Armed Police Force and Nepal Police regarding the reconstruction the embankment affected by the recent flood.

“The government considers the agony of the people as our own,” said the PM, adding, “We will form a parliamentary committee to tackle this problem of constructing embankments in Mahuli and Khado rivers.”

Home Minister Janardan Sharma, former minister for general administration Rekha Sharma, home secretary, chief of Nepal Police and nearly a dozen of lawmakers had inspected the flood-affected region along with the prime minister.

Home Minister Janardan Sharma instructed Chief District Officer Krishna Bahadur Katuwal to create temporary shelters, provide necessary food and water and health facilities for the flood victims. He also informed the victims that they can contact the home ministry directly if there is any problem in the relief programs.

Chairmen of various parliamentary committees as well as local lawmakers were present during the prime minister's inspection visit. There was a huge presence of locals and flood affected people. They welcomed the prime minister with flowers and garlands. The locals appealed to the PM that the government should be more focused toward solving the problem of flooding rather than distributing relief.

Meanwhile, Prime Minister Sher Bahadur Deuba did not answer any questions from journalists regarding the controversial embankment constructed by India in Tilathi, Saptari during the visit to monitor the flood-affected areas.

During his five-minute talk with journalists, PM Deuba remained silent when asked about the challenges and problems faced by the Saptari locals from the construction of embankment by India. After the topic popped up, PM Deuba hurried to the helicopter avoiding any further questioning or queries from the press.

Although PM Deuba instructed the concerned authorities to manage the Rajbiraj-Tilathi road section and expedite the construction of various bridges, the locals were expecting the PM to speak about the contentious embankment  built in the no-man's land, which has been inundating the Nepali territory during monsoon since a long time ago.

“The government has not realized the seriousness of the pain and suffering that the people have been facing for a long time due to this disputed Indian embankment,” said former Village Development Committee chairman Dineshwar Mishra, adding, “We had many expectations from the visit of the PM but he has proved he is not serious about this.”

India started construction of this embankment from 1974 in between Saptari's Tilathi and the Kunaulo Gram of India. The embankment covers nearly three kilometers of land along the Nepal-India border.

Former irrigation minister and current lawmaker from this constituency, Umesh Kumar Yadav, said that the government needs to be serious about Indian obstruction and also accused India of 'high-handedness'.

Hotel entrepreneurs' problems will be solved: Minister Ale
18 hours ago