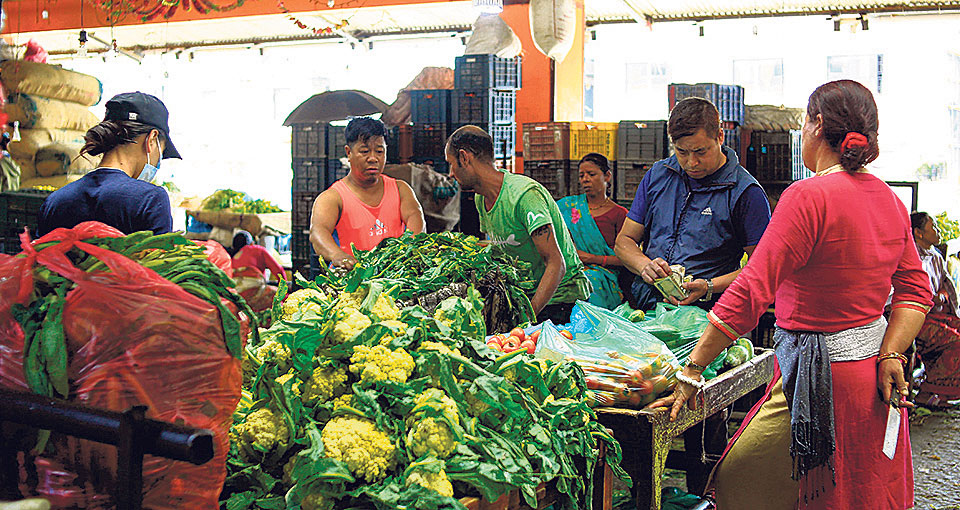 NEPALGUNJ, July 30: Bhandu Rai has been selling vegetables at Rani Talau vegetable market of Nepalgunj for years now. His experience says that local vegetables are in demand but the supply is not regular. On the other hand, vegetables imported from India cater to the needs of even those who want off-season products. Because Indian vegetables are produced in huge quantities, they come for cheaper rates, too.

"Even though people know that Indian vegetables are not that healthy, they go for it for two reasons. One, they get it for cheaper rates. And two, India supplies both seasonal and off-season vegetables anytime," said Rai.

Rani Talau vegetable market remains crowded throughout the day. Wholesalers have different corners to showcase their products while retailers occupy the front yard. According to them, local vegetables last for one or two months. The other months, they are largely dependent on Indian supplies.

"We get vegetables from different parts of the district and even Kapurkot of Salyan. But that does not suffice. Our vegetables last for around two months," Rai elaborated on the issue. "If Indian vegetables are not sold, there will be a crisis in two days."

In its policy, the government prioritizes local products. Farmers are given seeds, fertilizers and technical assistance at subsidized rates. All this should have encouraged the farmers. However, they say that the government has failed to address their problems.

Requesting anonymity, a farmer from Nepalgunj stated that all benefits or subsidies are given to those who have good link with the political leaders. "There is a syndicate. Those who are not even farmers get all the benefits," he said. "And if you talk about the real farmers, they get confused with the process and get lost in the way while going to grab the benefits meant for them," he added.

Similarly, the farmers find it very hard to enhance their products in the lack of irrigation facilities. Water woes mar both lifestyle of people and their agricultural businesses in most parts of the district. The lack of storage houses has also taken its toll on the farmers' enthusiasm.

A huge quantity of vegetables enters from India to Nepal through the Nepalgunj border point. In the last fiscal year alone, vegetables worth over Rs 2 billion was imported through the border, according to the records of the customs office.

KATHMANDU, July 11:Prime Minister KP Sharma Oli has said that he was also deceived into thinking that no letter with... Read More...

Indonesia police chief, others removed over soccer disaster
55 minutes ago