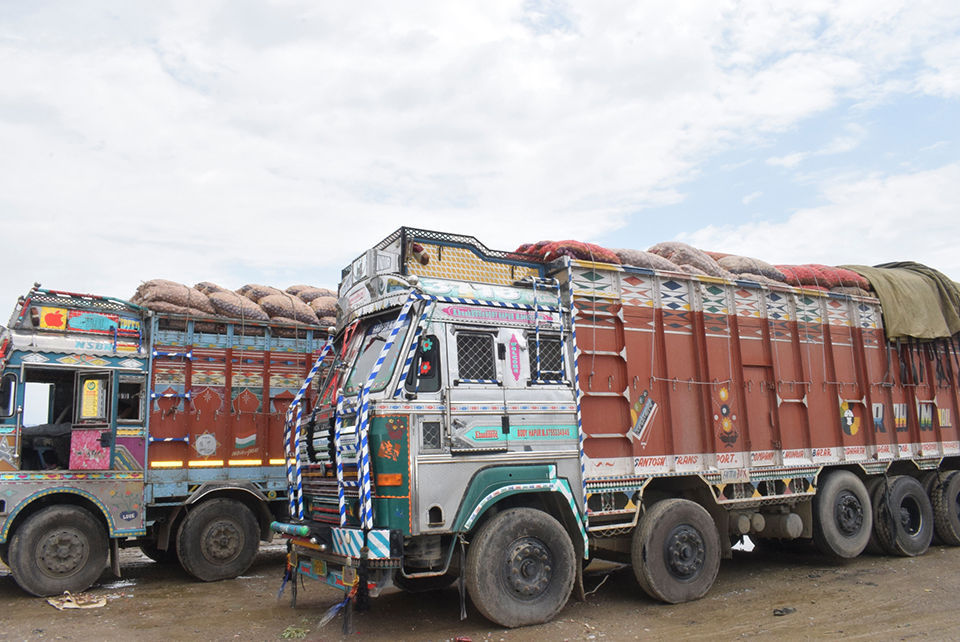 Trucks carrying onion and potato at the customs yard in Bhairahawa.

BHAIRAHAWA, June 24: Following the government's decision that fruits and vegetables will be allowed entry into the country only after verifying that they are free of pesticides, 17 trucks carrying onion and potato from India have been stopped at Bhairahawa Customs point.

Nepal government had published a notice in the Gazette on June 17 that quarantine test and examination of pesticide residue must be done at the customs point while importing fruits and vegetables.

Following the notice, more than 100 trucks of vegetables and fruits have been halted at the Sunauli border point apart from the 17 trucks.

Bhairawaha Customs Office has said that the trucks will get customs clearance only if the agro products get certificate of being free of pesticide residue.

Kaliram Paudel, information officer of Bhairahawa Customs Office, has said that the provision has been implemented after the Customs Department issued a circular in this regard on June 19.

However, there is no mechanism even in the quarantine office to examine the residue of pesticides.

"We had a meeting with the customs office. But we don't have infrastructure to test pesticide residue. Also, we haven't got any direction in this regard," Brij Kishor Upadhyaya, crop protection officer at the quarantine office, said.

Upadhyaya said that there is also shortage of human resource for the purpose. The office operates with only one assistant, according to him.

One Indian truck driver said that they were not aware of the provision of pesticide clearance.

On average, about 20 to 25 trucks of vegetables and fruits and 40 to 50 trucks of onion and potato enter Nepal from India every day.

Local farmers, who were facing losses being unable to compete with the Indian imports, are delighted with the government move. Hari Om Lodh, a local farmer, said that this new regulation has come to their respite.

Customs agent Ashim Neupane said that implementation of the provision will be an opportunity for Nepal to be self-reliant on vegetables. However, he said that the government should have prepared proper mechanism for testing and certifying before taking the decision.

The Ministry of Industry, Commerce and Supplies has issued a notice saying that synthetic liquid drinks and plastics less than 30 micron has been restricted for import. The decision has been implemented under the government's trade deficit minimization plan.

46 dead, 16 hospitalized after trailer of migrants found
5 minutes ago
Stockbrokers permitted to operate their own TMS for online trading of shares
2 hours ago