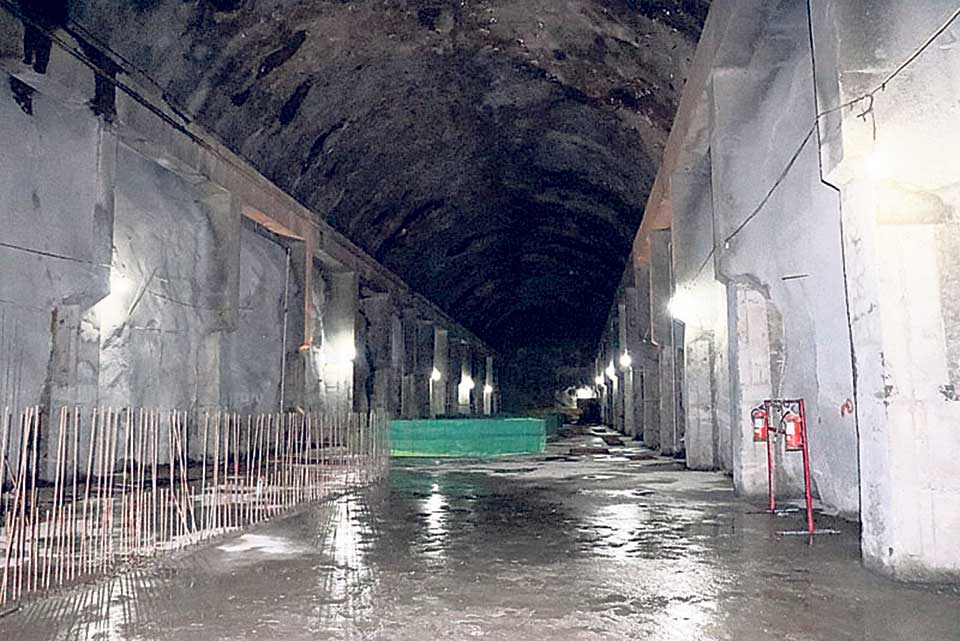 Indian contractor blames problem in transportation of pipes for the delay

DOLAKHA, Jan 31: Upper Tamakoshi Hydropower Project (456 MW) is facing the risk of missing its completion deadline due to the negligence of Indian company Texmaco Rail & Engineering Ltd - the contractor of the mega project's hydro-mechanical works.

Project officials allege that the Indian firm is intentionally delaying its work to affect the project.

The project based in Lamabagar of Dolakha has set a completion deadline of December 2018. Four international contractor companies are working on four different packages. The Indian company has received the contract for the second package which covers hydro-mechanical works of the project.

Project officials warn that the delay of the Indian firm could push the completion deadline back by at least 18 months. “Hydromechanical work is moving at a snail's pace. The contractor blames the slow work to the problem in transportation and other issues,” an official of the project told Republica. “If the government does not press the contractor by taking diplomatic initiatives, the completion deadline could be affected.”

The company has been entrusted hydro-mechanical works like laying down pipeline and building gates in tunnel and dam site. While a Chinese company, which won the contract for civil works, has completed most of the civil works, including building an 18.4-kilometer tunnel, the Indian company is creating obstacles in the project work.

According to a technical officer of the project, it is taking at least three days to install a five-meter pipe with the 3.6-meter circumference. “As per the project schedule, around 160 pipes should have been installed by now. But the Indian company has installed only 40 pipes in the tunnel so far,” the officer told Republica.

Based on the calculation, it will take at least a year to install the remaining pipes. It will push the completion deadline by two years, the official added.

Ganesh Neupane, the spokesperson for the project, said it takes 12-15 days to transport a pipe to the project site in Lamabagar from Simara. “We have directed the Indian company to speed up transportation of pipes. But it has managed to bring only three pipers per day,” Neupane said, adding: “The company is blaming the poor shape of Khadichaur-Charikot road section for the delay in transportation of pipes.”

According to Rana, the Indian company has stored the pipes in Birgunj and the powerhouse area of Sunkoshi Hydropower Company citing transportation problem. “Due to our repeated instruction, the contractor has expedited works to transport pipes to the project site,” Rana said, adding that the project can be completed in eight months if the Indian contractor completes its work on time.

Project officials said taking action against the Indian company won't be a wise move as it would push the project backward. The better way is to keep pressing it to complete the work on time, project officials say.

Provincial Assembly Member from Dolakha-1, Bishal Khadka, said that negligence of one contractor should not affect the entire project. “Since this is the largest hydropower project with Nepali investment, such obstacles need to sort out as soon as possible,” he added.

DOLAKHA, April 12: The country is suffering a loss of around Rs 1.2 billion per month due to delay in the... Read More...