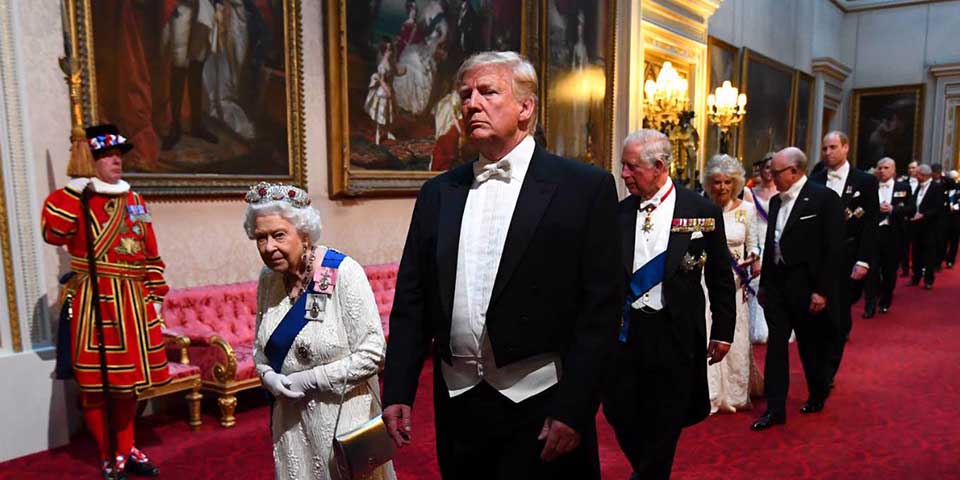 The Britain that long prided itself on being pragmatic, tolerant, and fair-minded is now at risk of incubating an inward-looking, intolerant, and adversarial brand of nativism

LONDON – After three days of pomp and ceremony that presented an image of a seemingly unchanging Britain, US President Donald Trump has now departed London. But beneath the veneer of pageantry, Britain is consumed not only by a stalled Brexit and the unending debate about it, but also by a far more profound crisis of identity: a struggle to rediscover what it is to be British.

There is a grim irony that this week also marks the 75th anniversary of the D-Day invasion, which began the liberation of Europe from fascism. The current governing Conservative Party now seems hell-bent on forswearing any agreement with the European Union, declaring a no-deal Brexit, and crashing out of the EU on October 31—an outcome that would amount to a declaration of economic war on Britain’s continental neighbors.

The Britain that long prided itself on being pragmatic, tolerant, and fair-minded is now at risk of incubating an inward-looking, intolerant, and adversarial brand of nativism.

Yet for centuries, our island status led us to look outward, as explorers, traders, missionaries, diplomats, and merchant venturers who saw the English Channel not as a moat but as a highway.

We were among the first to practice political tolerance. Long before the American Revolution, as the French philosopher Montesquieu conceded (perhaps reluctantly), Britain had pioneered the modern idea of liberty. In the centuries that followed, we championed what Winston Churchill defined as one of our most important national characteristics: a belief in what he called “fair play.”

What went wrong?
But the meteoric rise of the Brexit Party, led by the anti-European Nigel Farage, and Farage’s success in setting the terms for choosing the next Conservative prime minister, has the rest of the world wondering what has happened to the moderate, rational, non-ideological Britain famed for its empiricism and belief in evolutionary rather than revolutionary change.

Farage has more in common with French far-right leader Marine Le Pen, Trump, and Russian President Vladimir Putin in their willful desire to destroy any institution labeled “global” or “European” than with traditional British values. And, by identifying patriotism with a crude us-against-them nativism that targets and demonizes immigrants, Europeans, and Muslims, he is redefining our country as introverted and xenophobic—in effect, hijacking our history and what it means to be British.

In a leaked 14-page memo, Britain’s most senior civil servant tells us that with a no-deal Brexit, prices would go up 10 percent, a recession would follow, and civil disorder could not be ruled out. In addition, the Northern Ireland peace settlement could collapse and the Union with Scotland would be in jeopardy. But thanks to Farage—and the Faragism that has taken over the governing Conservative Party—an act of economic self-harm that clearly runs counter to the national interest is portrayed as the apotheosis of British patriotism.

Narrow-minded nationalism is not simply a British disease: across the West, much of the public sees globalization as leaderless, lacking a human face, and akin to an uncontrollable runaway train. Moderate leaders everywhere must now respond not only to the economic discontent of millions who are losing out, but also to the cultural pessimism and the dismissal of politicians as being “in it only for themselves” that are giving succor to the populist nationalism promoted by Trump cheerleader Stephen Bannon and his ilk.

What makes it so much worse in Britain, however, is a series of gross errors of political judgment during and after the 2016 referendum campaign. While the defeated Remain side waged an economic campaign centered on fear of jobs losses from exiting the EU, the victorious Leave side waged a culture war by exaggerating fears of immigration and asserting the need for patriotic Britons to “take back control.”

Only fleetingly did the voters hear the patriotic argument for being in Europe: that Britain was truest to itself when looking outward, not inward, and that our pragmatic mission was to lead in Europe, not leave it.

In the wake of the 2016 vote, any group of leaders other than those in power would have spearheaded a national debate to remind ourselves that an intolerant and isolationist brand of nationalism is not an expression of British values, but a repudiation of them. That debate never happened.

What next?
Now, with Prime Minister Theresa May’s government collapsing and Parliament deadlocked, Brexit has revealed a crisis so deep that it is beyond remedy by traditional means—whether by a change of policy, leader, or government. As in other representative democracies, an already threadbare trust in politics is further undermined because political parties are no longer performing their traditional role of aggregating public opinion and building an informed and robust consensus. In their place, Facebook, Twitter, and other social media have created a spurious impression of direct democracy in which leaders and led communicate with one another on equal terms. Even at its best, the Internet promotes a shouting match without an umpire, and at worst an echo chamber that isolates users and amplifies the most extreme views.

It may take years to refashion the party system. In the meantime, we can and should attempt to build a more informed democracy. A series of citizens’ assemblies, for example, could convene a sample of the voting public to hear facts, interrogate experts, and challenge factional views. Such groups, working through the issues, offer the best way to forge a consensus on Britain’s European future in advance of a second referendum.

The UK would have benefited from time to reflect before it was time to vote in 2016. But it’s not too late. I am certain that, following such a process, the British people will find themselves in a far more tolerant, fair-minded, and more outward country than that championed by the extremists who today claim to speak in our name.

Gordon Brown, former Prime Minister and Chancellor of the Exchequer of the United Kingdom, is United Nations Special Envoy for Global Education and Chair of the International Commission on Financing Global Education Opportunity. He chairs the Advisory Board of the Catalyst Foundation
Copyright: Project Syndicate, 2019.
www.project-syndicate.org

LONDON, Oct 26: Britain’s government denied a newspaper report on Saturday that it will seek to weaken workers’ rights after Britain... Read More...

LONDON, Oct 26: Britain’s government denied a newspaper report on Saturday that it will seek to weaken workers’ rights after Britain... Read More...