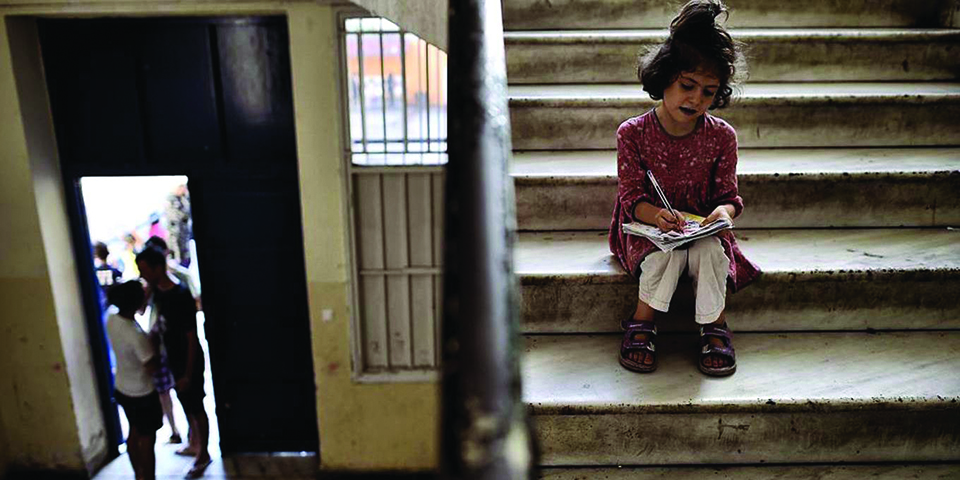 Fewer than half of school-age refugee children attend school, not even one in four make it to secondary school and under one percent pursue a higher education

LONDON – It has long been known that the Moria refugee camp on the Greek island of Lesbos is plagued by overcrowding, unsanitary conditions, and rampant violence, including riots that have left many injured. But when aid workers reported in April that children as young as ten were attempting suicide, another tragic facet of the refugee crisis was highlighted: 30 million children around the world are currently displaced, many in appalling conditions. The crisis is not just putting them in danger today; it is threatening to destroy their futures.

In the Moria camp, children live in fear. Recent riots have displaced hundreds of camp residents and badly injured several. This is traumatizing for children who are with their families, but even more so for the many who are unaccompanied. Making matters worse, many children lack even basic shelter, with thousands of families crammed into cheap donated tents that often aren’t even waterproof. Last winter, three people died of carbon monoxide poisoning while trying to stay warm.

But the challenges these children face extend far beyond the short term. Even if refugee children eventually manage to get somewhere safe, their prospects are bleak, because most will never have a chance to go to school—a reality that will severely undermine their ability to find gainful employment.

At last count, there were 1,729 children in Moria, more than 1,000 of whom are of school age. The number recently increased as a huge surge in boat landings brought 834 new arrivals to the camp last week alone. None attends public school, and the Greek government has yet to allow them access to any of the formal education programs that were established for asylum seekers.

The best option available to Moria’s refugee children are cramped informal education centers, where high teacher turnover is a serious problem. Yet not even this option is available to all, as the existing centers can provide education to only 500 children per day—less than half the school-age population. And that number may be set to fall: the largest informal education center, run by UNICEF, is set to close in December, because the €30,000 ($34,900) per month needed to operate it cannot be found.

But there may be hope for refugees stuck in Moria. Greek officials have given the Ministry of Migration 30 days to improve conditions in the camp or close it down. The move is long overdue.

This is not to diminish the momentous challenge Greece faces. Already struggling under the weight of austerity, the country has had to cope with 1.1 million refugee arrivals since 2014, and hundreds more refugees continue to arrive on the shores of Lesbos every day. This has been devastating for the small island, whose tourist industry has been decimated. With the rest of the European Union effectively closed to refugees in Greece, camps on the mainland have filled up. But Moria is still operating at 3-4 times its official capacity.

The European Commission has allocated more than €1.5 billion to Greece since 2015 to manage the refugee crisis and says that additional emergency support is on offer. Where exactly past funds have gone is now the subject of searching questions by Sebastian Leape, a volunteer who spent recent weeks in the camp.

Inadequate support for refugees is not just a problem in Greece, with refugee camps in many countries having come under scrutiny for poor conditions. As United Nations High Commissioner for Refugees Filippo Grandi has acknowledged, this includes a dearth of educational opportunities. Fewer than half of school-age refugee children worldwide attend school; not even one in four make it to secondary school; and under one percent go on to pursue a higher education.

Countries, where there are large populations of refugees, need enough funding to enable them to give refugee children access to local schools. The Education Cannot Wait fund was established to close the education-financing gap for such children. Led by Yasmine Sherif, the fund coordinates with the UN and its humanitarian agencies, both financially and organizationally, to ensure that every refugee boy and girl has the opportunity to get an education.

Long-term educational and employment needs have historically been undervalued in humanitarian planning. But, as much as refugees need proper food, shelter, and health care today, they also need the knowledge and tools to build new lives and contribute to society tomorrow, whether in their home country or in a new one. It is in the best interest of all of us to ensure that they gain the skills they need.

Gordon Brown, former Prime Minister and Chancellor of the Exchequer of the United  Kingdom, is United Nations Special Envoy for Global Education and Chair of the International Commission on Financing Global Education Opportunity. He chairs the Advisory Board of the Catalyst Foundation

European Union has been too remote, too bureaucratic, and too elite-driven for too long ... Read More...